As I said in my last post, I'm out in Winchendon right now. So far, the weather has been perfect - sunny, not too hot, not too humid. The greatest thing about the the school where we're staying is the pool - its the absolute remedy for tired legs to go splash around between workouts. The food is good and plentiful, too, so we're working on a pretty great camp. This morning we did some hill bounding and ski walking at Mt. Watatic, an old ski mountain, on the access road. The surface of the road was the right combination of loose and yet hard-packed - good for footing, but loose enough for dull pole tips to dig in. That little sucker was steep, too! 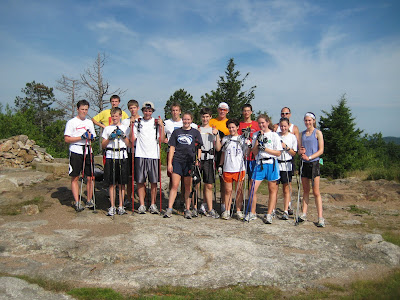 After teaching everyone how to ski walk, we hoofed it to the top, took another group shot, and then headed down to the shade to do some all-out bounds. People were really figuring it out by the end, its great to see the boys realize how powerful they can be and just let loose. Once we'd done some of that, we headed further down, to do some four-minute ski walk intervals. Not too much groaning, and the bugs were behaving nicely, so all in all it was a good workout. I led some stretching afterwards, and I think we all appreciated that, as yesterday was a tough day for most folks. We started the day with a 2.5-hour ski, Rob and I took the "red group" on a pretty long tour of Rindge, while Jamie took the "green group" and they learned how to classic and then did a nice little ski - definitely more than most of those kids have ever classic skied!

In the afternoon yesterday (after a nice break for lunch and a swim), we did some core strength. It started with a run, then some mobility, or dynamic stretching, and some plyometric jumps. Then the kids played ultimate while the coaches set up the stations - A good mix of arms, legs, and core exercises. After two circuits, everyone thought they were done, but I led them through eight minute abs, or as some of the boys nicknamed it, eight minutes of torture. If anyone stopped between exercises or cheated in any way, we added a minute of plank at the end, but luckily we only had to end up adding one minute of planks, thanks to Scott wanting to lie down before getting into his side plank. I get way too much pleasure out of torturing people... it must come from being a gymnast back in the day.

This afternoon we're doing some double pole technique and a longer double pole ski for the red group. They'll sleep well tonight! Actually, I think the coaches might sleep well, too... 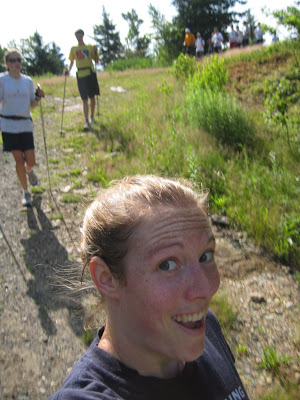