This past weekend was the New England Regional Ski Orienteering Championships, and I was the meet director. This basically means that my life was consumed by work for this race for the couple weeks leading up to it, and Ed's life was consumed as well. Ernst Linder was the third guy who got sucked into this - he was the course setter for Saturday. I set courses for Sunday, and Ernst and I conferred on each other's courses extensively. Lex and Pete Bundschuh did the bulk of the volunteer work during the weekend, with Pete standing outside manning starts, and Lex inside manning registration while Ed dealt with the computer stuff. Overall, things went really smoothly, and I wouldn't have been able to do it without such a good team. 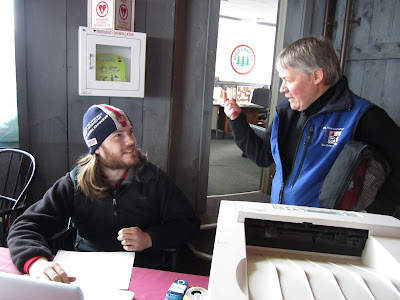 Lex instructing Ed how to do something.

Ed and I drove up there with all the set-up gear on Friday morning, which actually made things so easy it was like cheating. We met with the head ski patroller (Andy Pearson), who was planning to dump the control stands at strategic locations around the trails. This was crucial, because the stands are fairly heavy, and very awkward to carry on skis. All we had to do on the event morning was ski out to the dump-point, and spread out the stands. By midday, we had the registration area all set up, so we headed over to the golf course by the hotel to make some snowshoe trails for the sprint map. 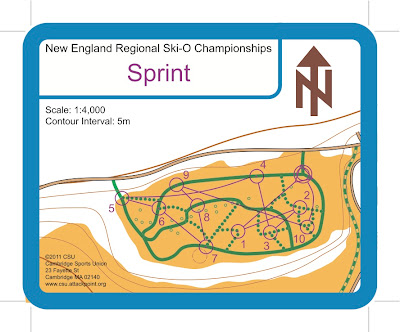 All those dotted trails are snowshoe trails. Of course, on the day, it was snowing and very blustery, so the map was rendered useless since you couldn't even see the trails. People just went straight, and seemed to enjoy themselves anyway. That's good. 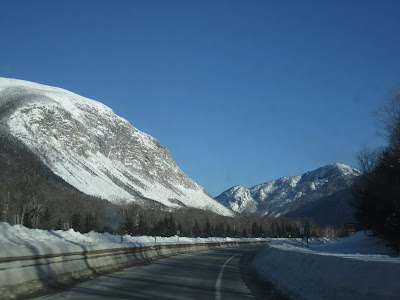 Ed was driving, so I tried to frame pretty pictures of Franconia Notch as we drove north. 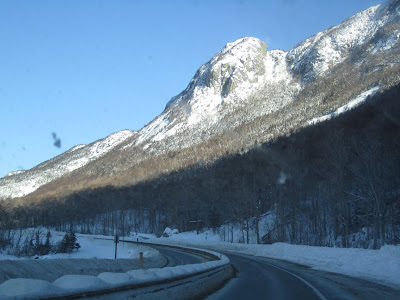 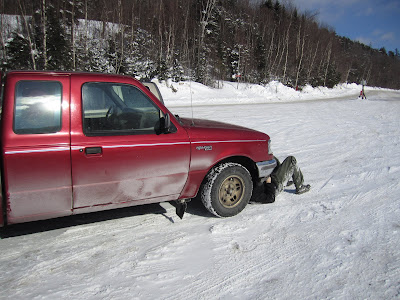 It's not a trip in Ed's truck if this doesn't happen at least once... 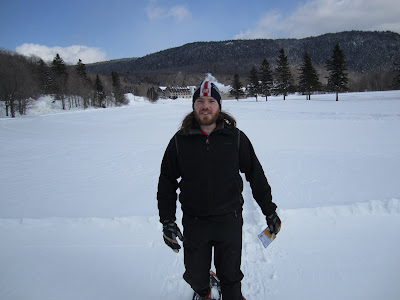 This is how Ed feels about snowshoeing. 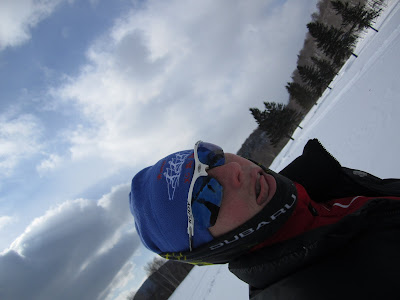 This is how I feel about snowshoeing. 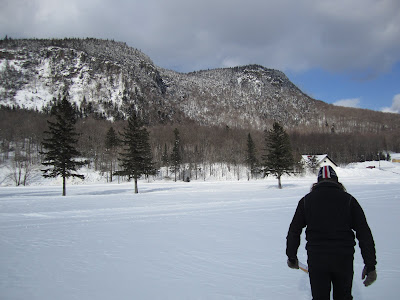 Ed snowshoeing some trails on the sprint map, with Abenaki Mountain in the background. There is a ski trail that goes to the top of that, but I was a benevolent course-setter and didn't send anyone up there.

Saturday was the middle distance race, and it went really smoothly. Nobody got lost, everybody was smiling, and most people genuinely seemed to enjoy themselves! 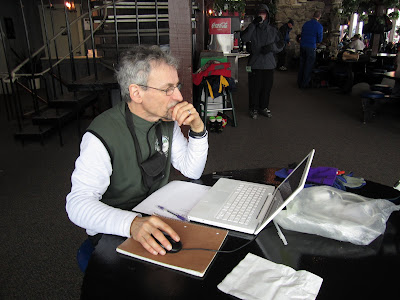 Ernst calculating the points for the Valentine's sweetheart cup - chocolates (a Lindt sponsorship!) went to the top three couples racing today - everyone got scored separately, and then combined with your sweetheart's score, you get ranked against other couples. Last year, Ed and I won the cup, but this year neither of us were racing.

I did go out on a blue course, but I got my butt kicked. Apparently, when you don't sleep, and you ski too much, and you stress too much, you get tired. Who woulda thunk it? 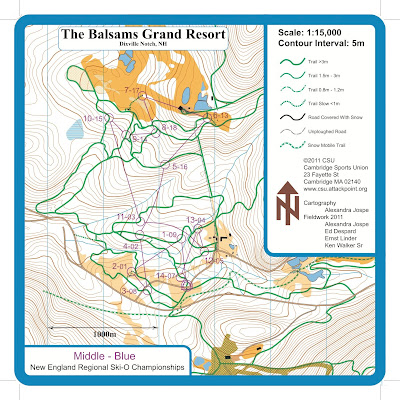 Check out all those contours under the powerlines from 5 - 6. That was just cruel. 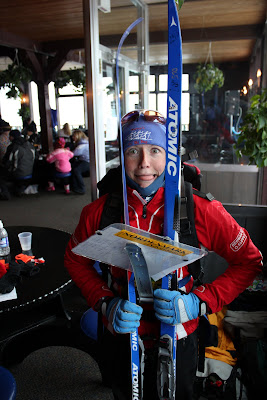 Heading out to pick up controls on Saturday. Yes, I am totally sane! On a barely-related note, the classic skiing at the Balsams was skigasmic. I only put my skate skis on for 15 of my 100km weekend, for the middle distance race I did, because I just couldn't bear to be out there not striding. 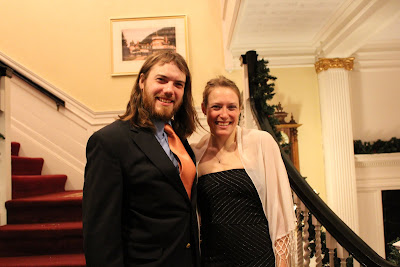 That evening, we had the awards ceremony, in a small room off the major dining room of the Balsams. The thing about the Balsams is that it's a 5-star resort - you aren't allowed in to dinner if you aren't dressed right. It was funny seeing all the orienteers dressed up, but apparently we do clean up pretty good. Everyone loved the dinner - it was a mile-long buffet table of all my favorite foods. I only had three plates of dinner, but I did a solid 4-5 plates of dessert. Those dessert plates are way too small!

The Balsams was the title sponsor of this even, and they made us some Balsams Bark - dark chocolate with toasted almonds - to give as prizes. Combined with Lindt Chocolates for the Sweetheart's cup winners, there was much chocolate being given out as awards. Basically, the weekend was all about eating.

After my fifth plate of dessert, Ed rolled me out of the dining room, we did a little setup for Sunday, and then passed out into one of those exhausted sleeps, assisted by a serious food-coma. Morning rolled around way too early, and we got up and outta there in time for our first 20km of the day, spreading out control stands and setting epunches. I got back in time for breakfast, which was as sumptuous as dinner. Holy cow, that was a good breakfast. My mouth started watering just thinking about it. Poor Ed couldn't get away from the registration table, so I brought him a selection of pastries, which made him considerably less grumpy. So people started out on our long courses, the longest of which was 31km shortest skiable distance, with 650m of climb. Not easy.

While they were suffering away doing that, I toodled along through the "Feastival", a 15km ski tour with four gourment food stops. Can you say yum? I was still pretty full from breakfast, but luckily the first couple kilometers of skiing took care of that. What a great idea! The first stop was a sundried tomato, spinach, and feta fritatta. Then we skied another km and got to the second stop, which not only had a bonfire, but the executive chef was hanging out grilling chicken, for chicken sandwiches on cibatta bread with herb mayo. He also had chili and fried tostada things at that stop. We spent a while feeding Canada Jays from our hands, and then it was time to zip around the lake to the third food stop, which was some sort of pork congee with asian spices, and the hot soup was quite welcome after the windy lake. Then the last food stop was an apple-cranberry crisp, and the most delicious crisp I've ever had. Following the tradition of the night before, I had seconds, and thirds.

It's a good thing I had such a competent crew of volunteers, because I didn't do much of anything meet-related on Sunday, other than set out some water for some people who had asked nicely. There were reports that Alex was hanging out at a bonfire out on the trails eating food. They were probably accurate... I did see a fair number of competitors whiz past me, as I enjoyed my apple crisp.

Thankfully, there was much skiing to be done to pick up the courses, or I might not have fit into the car to go home. 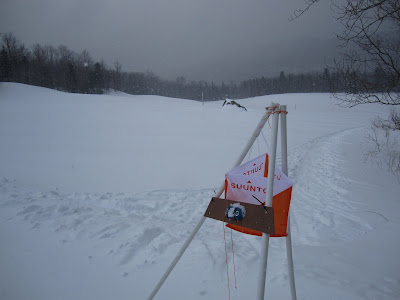 We had some of this weather on Saturday afternoon, but then it cleared up, and we got this weather: 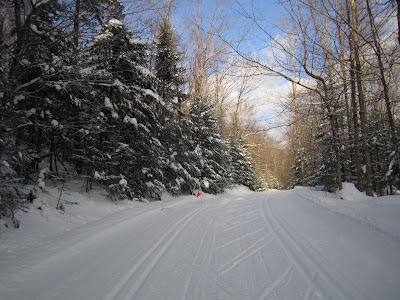 All in all, it was a great weekend, and I am super glad that I decided to try and put on a meet there. We ended up with nearly 45 starts on Saturday, and 60 people at the banquet, which was about five times more than what I'd expected. Good times, but I don't think I'll be doing another two-day meet for at least another couple months... 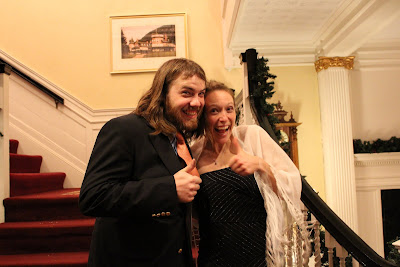