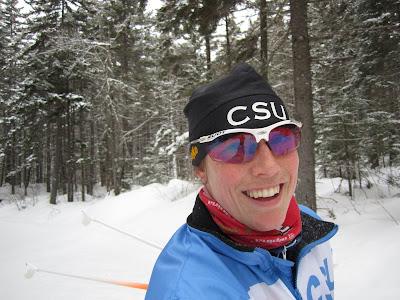 After a so-so race on Saturday, it's good to have a chance to race again on Sunday. It was a bright and blustery day, not too cold but the wind was serious - standing out where we were waxing was pretty chilling. Luckily, the course is all in the woods, so you didn't notice the wind. After some brief ski testing, we settled on a good klister, and I left my skis with the wax crew. I was more in the way than helpful around there, so I took the J2s on a course tour - it was fast, not too icy, but tons of leaves down in the tracks. Cate did a pretty spectacular faceplant on one of the hills, and we all learned a little lesson about not planting your kickwax over a beech leaf.

I ended up skiing on a pair of atomics from 1998 - they're good skis, but a bit old, and with a medium-warm grind. Luckily the hard conditions didn't really matter for glide, and the skis are barely stiff enough to be good in klister. My start spot was in that top seed, and I was 15s behind Rachel Hall (SMS) and 15 seconds in front of Elena Luethi (GMVS), some good skiers. It was a pretty good start spot, and I was feeling a lot more ready to attack the course than I had felt the day before. I guess I just need a hard day first to get motivated.

I started out, fast, and by the top of the first climb I was already catching glimpses of Rachel. The downhill didn't last nearly long enough, but I could tell I was moving fast across the flats, and into the hill at 2km I was closing down the gap with a good kick double pole. We got some good downhills after that, and I passed Rachel halfway down, but skidded the last turn, which lost me some wax, even on a Chola binder. At this point, you basically have one long uphill, and then just a downhill finish, but as I started the uphill, I realized that I had started a bit too fast. My legs were pretty flooded with lactic acid, just burning.

Rachel was back on my tail as I crested the steep part of the hill, and for a while we were even, her striding, me kick-double poling, but then Elena came through, and I knew I couldn't stay with her. Rachel got on her tail, but I was starting to slip too much, just unable to set my wax strongly enough, and my arms were pooping out from making the skis work earlier. I was certainly taking a peek around the pain cave as I came through 4km, and luckily at this point you get some rollers, so I could rely more on my double pole. I may be weaker than normal this season, but I can still double pole well - technique doesn't die.

Elena was gone, but my fast skis narrowed the gap to Rachel on the last downhill, and I put in a hard sprint to the end, nearly closing the gap completely. I was pretty pooped, but the effort was good enough for 9th, which is better than my seed spot - always something to strive for. I was still a minute behind Hannah Dreissigacker (the winner), but much closer compared to yesterday, relative to the distance, and more importantly, I felt like I was skiing well out there. I haven't really been in that much hurt in a race in a while, so it was good to experience it again.

They named the JO team afterward, and CSU is sending 8 skiers! One of my J1 girls, Olivia, was on the bubble, and skied two really solid races to put her on the team, so I was super pumped about that. We also got the overall titles for the Eastern Cup - Corey won the open women's title, and Cate won the J2 girls' title. It is so much fun to live vicariously through these fast little skiers!

Post JO-team-naming, most of CSU headed to Jackson, for a training camp during their winter break. I'm here for a few days, and while it's certainly a bit crazy being in a house full of juniors, it's pretty fun, too. More on that, later. 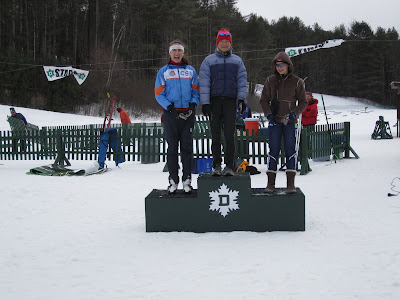 Ali on the podium - miss Oh-I-don't-know-about-my-training-recently, on her home course had no problem going fast!
Posted by Alex at 9:40 PM