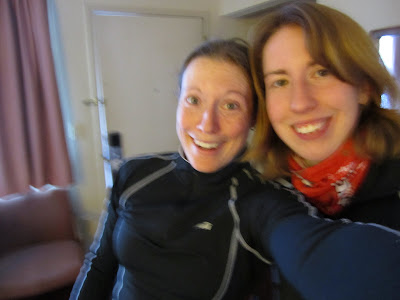 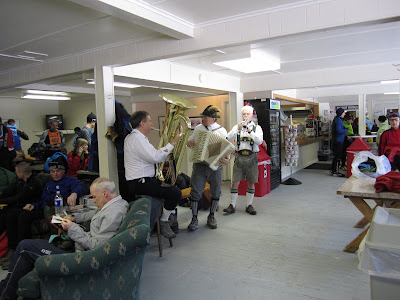 Don't all races have an oompah band providing live entertainment?

I've been warned about the Lake Placid Loppet and its hills, and the grim tone of voice is usually what turns me off from doing this race. One of those season-wrecking courses, that just climbs so much you can't recover from it. But then Jess called me up and told me she was doing it, and I figured, how bad could it be? Its just hills. Turns out the course was sweet. There was a good bit of climbing; my garmin thought we did 1200m of climb over 47km, but the descents make it all worth it. You gotta go up to go down, the curse of this silly sport. The women's field was thin, to put it mildly, but that made it easier for Jess and me to ski together, without having to worry about some other fast chick to make us have to speed up.

It was a beautiful day to be skiing, warm air but cold snow, and bright blue sky. The snow was super soft on the Porter Mt. loop, and while that sucked mightily, at least I had a good pair of soft skis for it, that were running pretty quick. We lined up maybe three rows back, started out comfortably, and fell into the conga line somewhere around 35th probably. I don't think I could ever see the front of the race, but it was pretty packed until we hit the first downhill. It wasn't a long one, but it had a corner in it, so there were masters snowplowing right and left, and Jess and I passed a whole slew of people. Kind of fun, having fast skis and being able to ride out the downhills that intimidate other people. This trend continued for the first 15km, and so despite the uphills being pretty painful, I was having fun. The hills on Porter and East Mt. are big enough that by the time you hit the ladies' 5k loop, it feels easy, despite there still being some pretty serious climbs in there.

The ladies' 5km also has the awesomest downhills, and despite not knowing what was coming, I was bombing every one. That caught up to me on the last corner, where I was trying to step turn through the berm and got my feet caught up in deep snow, and fell down. I got up pretty quickly, but by the time I'd gotten up, Jess had gone down, because she had passed me as I sat in the snow, turned around to heckle, and caught her own rut. So we were giggling and picking up waterbottles and glasses, and I was eating one of Jess's gels that had fallen off her waterbottle belt, when the group of masters we'd dropped on the previous downhills caught up. They thanked us for both falling down, and skied off, but then we caught them on another downhill. Hey! Hey guys! Guess what! We're faster than you on the downhills!

After the 15km of hills, we got a 10km loop over at the biathlon side, really cruisy, and the snow was a lot firmer over there, so my shins and calves could calm down a bit. I drove the pace for a while trying to dump the group of masters that was drafting us, but it was too flat for that, so we slowed back down so we could chat. Eventually we got back to the XC stadium, and one of the masters took the lead (seriously, what's with making the small people do all the work pulling? At least it wasn't windy). I figured we'd be losing him soon when he mentioned that he felt like he'd just done a hilly 25k and had to go do it again... yup, you aren't going to last too long if that's how you feel going in to the hills. Shortly thereafter, a real heavy breathing guy came up behind us, lunged his way around, and staggered up the hill with much flailing. It was only amusing because he tripped himself within 3 seconds of trying to beat the girls up the hills, and we all just sort of skied on by. By the top of Porter Mt. we'd caught the Berkshire master, and then we got some downhills, so we put some time on the rest of the group.

I took the lead going up East Mt, because I figured then I could crawl along at whatever pace I felt was comfortable. Jess didn't seem to want to take the lead back, so it was basically like a hard-paced distance ski, pretty chill. At the top I mentioned that I was starting to feel it, and Jess just sort of chuckled, said she figured that was the case since I'd gotten pretty quiet. More sweet downhills, and by the time we came through the feed at 40k, the race was basically over. We'd dumped our group of masters behind us, and there were two more guys ahead of us that we could see we were closing in on. Some steady skiing caught them, and at 5km left, Jess skipped the feed and took the lead. I was ok with this, because I was planning a massive sprint finish win, and if I could rest for 5km in her draft, that would help with the whole "winning" bit. But then we went down a hill, that wasn't tricky or anything, just straight, and my foot caught a rut and my leg was too tired to correct for it, and I went down in a tumbled heap, killing my momentum.

I got up and going again pretty fast, but Jess had enough momentum from the downhill that she was already over the crest of the uphill, and I knew that if I were up there, I'd be attacking with everything I had left. So I put out more effort than I'd expended yet, and set to chasing. I got lucky in that we were 45k into a 47k race, and Jess was pretty tired, because I finally made contact on the last uphill of consequence, a steep little bugger out of the sand pit thing and up to the level of the tunnel across the road. I was wheezing pretty hard, its not easy to change pace when you've been at one speed for that long, but Jess didn't throw down a counter attack (again, I totally would have done that if I were in her shoes), she just kept skiing steady, so I got a little bit of rest before we crossed under the tunnel and back to the XC side of things. We now had something like 300m left, so I decided it was time to do this massive sprint win thing.

Alex: Could I get by on your right? I think I would like to do what they call "an attack".
Jess: Oh, sure, I'm pretty done.
Alex: AND she's attacking! After a grueling stage, will she have what it takes to win the sprint?
Jess: Does she have enough in the tank?!? Jess is pulling out a counter-attack, she is challenging Alex for her position!
Alex: I have to stop narrating now, I'm too out of breath.
Jess: Yeah, me too, ski racing is hard.

I did end up taking the win, by about two seconds. Jess didn't totally give it up to me, but I think she cared a lot less. Either way, it was super fun to ski 50k with a close friend, on a beautiful day, on a challenging course, with fast skis. Despite the 7hr drive home in a snowstorm (thanks for keeping me awake, Cary), I was in a pretty good mood by the end of the day. We ended up placing pretty well among the men, too - 21st and 22nd, of 58 starters. 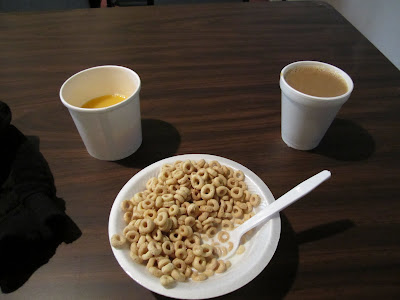 Breakfast of champions. I meant to take a photo of every new setting and make a pretty little montage, of Alex downing two bowls of cheerios and two heaping bowls of oatmeal, but I forgot, and in the end, its not that interesting anyway.
Posted by Alex at 2:54 PM

I find it a little comforting that even highly competent skiers managed to eat some snow on that course. I suspect you were going way faster when you crashed though. So do you think lighter skiers fare better when it is soft and gets chopped up by skimming on top, or does weight add stability and ability to cut through the rough?

I have a thing for going fast on skis.

Not sure if its easier to be lighter or heavier, but it's always advantageous to move your feet quickly, especially if its deep snow. As a light person, I don't think I skim over the top.

One thing I do that helps is as I'm approaching a corner, I pick my feet up (one at a time, obviously), it gets me ready to quickly hop around the corner.

I really enjoyed reading your story. You write very well! Thanks.