Ski to the Clouds

I was wrecked after Rangeley - physically and mentally. Totally shattered. I had pre-registered for Ski to the Clouds, but given my state of immobility Saturday night (you want me to get UP off this floor? Whatever for?), and the state of the weather on Sunday (mmmm, 45 degree rain!), I was sort of wishing I hadn't. I was staying at Colin's parents' house again, which was nice, because it meant not driving all the way back to Boston that night, so we did the important things - pasta, beer, massage, and play with the cat, and I started to think there might be hope for tomorrow. 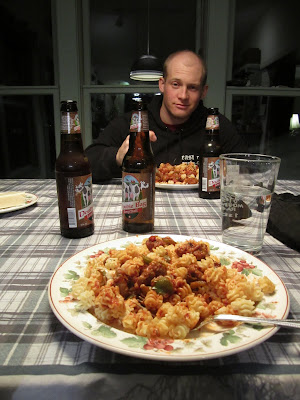 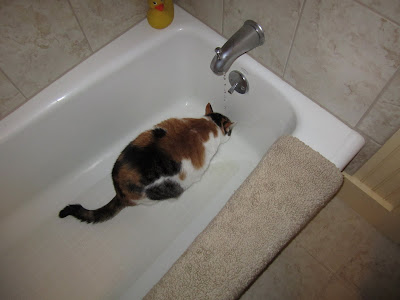 This cat is dumb - she likes to drink out of the faucet in the shower, and it drips on her head. She doesn't seem to notice.

I decided to make the call about racing in the morning - I'd go for a jog and see how my legs felt. I honestly didn't think there would be any point to racing up Mt. Washington if my legs felt like they did during the marathon. I don't drop out of races, but I do decline to start some of them, if I have a good reason. The rain was fine, weather don't scare me.

I woke up before my alarm, headed out for the test jog, and decided that the race was a go - my kneecaps hurt like hell, but that receded to a dull ache after about 10 minutes, and my legs seemed to have recovered from the effort the day before. And, I have a great pair of slush skate skis, that never get to get used. Ok, let's hit the road! 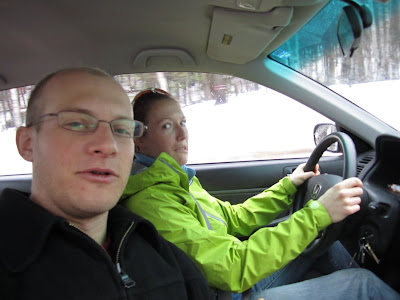 The reason we were carpooling is actually kind of sad - Cary took an SUV to the mouth while riding his bike last week, and while he's "ok", relatively speaking, he needs some major dental surgery, and apparently thought that racing a 50k wasn't the best of ideas. So the original plans fell through. Anyway, Colin was being a good carpool-mate and claimed that he didn't mind stopping by Mt. Washington on the way back to Boston, although I couldn't convince him that an uphill ski race in the cold rain was a good idea. What gives? 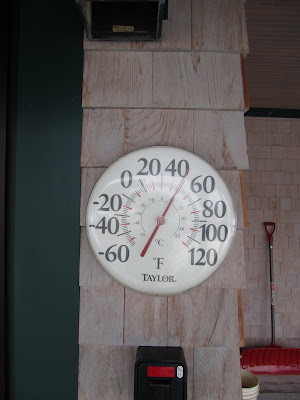 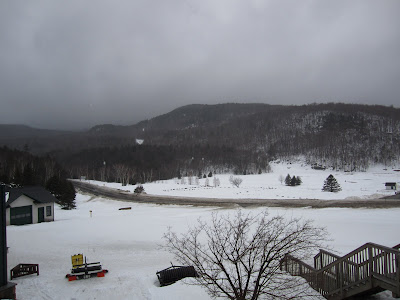 Mt. Washington is right there, see her?


"America's toughest 10km". Yup. 4km flat stuff, and then 6km up the Mt. Washington auto road. I knew I wasn't going to feel super fresh, but I was mentally prepared, and I was also prepared for when my left calf completely blows up. I just hoped I could postpone the inevitable to partway up the climb. This calf thing has been getting worse over the last 4-5 years, basically I'm convinced it's compartment syndrome, but haven't gotten it tested or done anything about it, I'll admit I'm still in the denial stage. Anyway, the gist is that my left calf tends to blow up when I skate up hills hard, but I keep hoping it'll behave.

My skis were rockets, and I found myself with some fast guys, cruising through the flat bit. Unfortunately, the race is ultimately decided on the climb, and the calf thing makes that a bit challenging. This time I made it about 20 strides into the hill before I felt it begin to go, and within half a km I was in agony. It feels like my whole lower calf is exploding, not sharp pain, just like there is some giant squeezing my leg. I had made sure to tie my boots super loosely; this wasn't a boot issue. But goddammit, I don't drop out of races. It turned out both V1 right and left hurt equally as much, but things were a little better if I kept my left ski on the firm-packed middle bit of the trail. I couldn't push off of that leg, but I could still stand on it, which is only like stage two of complete bodily disfunction during skate races. Only 45 minutes of climbing left!

Pretty quickly into the climb, the Bates girl who ended up winning caught me. I decided to see what it was like to ski behind her - Obviously I had to try harder, but I lasted for about five minutes before my calf started to move towards stage three, the can't-stand-on-that-ski anymore stage, so I backed off. Just before the 2mi sign, Ellery Leeds and Katie Miller caught me, and I skied with them for a bit, aided by a flat part that I could double pole, to rest my calf. Then things went steep, and I went back to being unable to push off my leg. Shortly thereafter, Jane and Meghan McClelland caught me, and I could ski with them for a little longer, but not enough. The pure limiting factor was my calf - I was watching my HR drop. Not supposed to do that on a hillclimb. 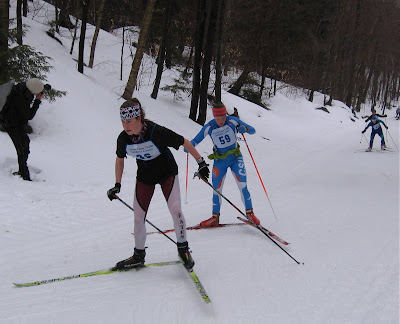 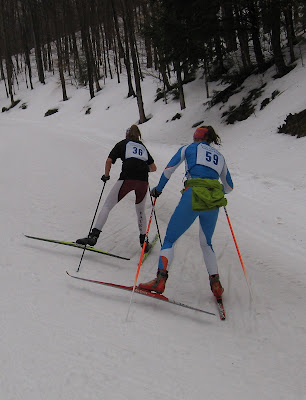 Anyway, it took me 3km to remember to remind myself that I love hills, and I alternated between "I love hills" and "good at hills!" in my head for probably 20 minutes. "This is fun!" was a bit too much, my brain is dumb, but not that dumb. The climb seemed pretty interminable, but I wasn't going to stop, and I'd reached some sort of equilibrium with the pain in my calf - it certainly hurt, but I could keep skiing, albeit not that fast.

The finish was a welcome sight. And skiing up the hill with a rain jacket (and dry hat in the pocket) tied around my waist was one of the few smart things I did today. The descent was actually really fun, since you could carve through the slush.

My finish placing wasn't where I'd hoped, but calf issues aside, I am much happier with this race than yesterday's - probably has to do with forcing a cheery attitude on myself. Today had the potential to be truly miserable - and it wasn't. I guess my new standard for ski racing is "as long as it isn't miserable, we're all good".

I plan to rest in the ten days between now and my departure for Sweden, but I'm just so bad at resting. Resting is a much bigger challenge to me than something like skiing halfway up Mt. Washington. Here goes...
Posted by Alex at 10:02 AM