The weather couldn't have been any different between the sprint race, on Tuesday, and the Middle distance, on Wednesday. Tuesday was warm, maybe a little windy, but sunny and bright, except for a quick snow squall, lasting all of 10 minutes, right during the women's red group (good thing they started behind me) - this shuffled the results a bit, but not too much. Ali had a great race, ending up in 18th, the best finish ever by an American woman. 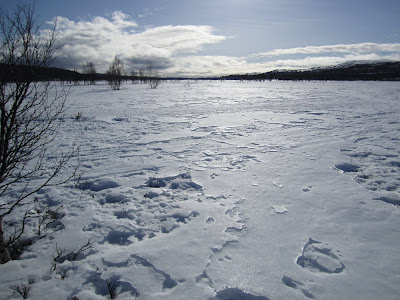 The view down the lake Tuesday morning.

I had a very frazzled race, with a decent placing (24th), but I was pretty unhappy about how the race went. Apparently, Swedish coffee is like 10x stronger than the weak American stuff I'm used to, either that or I had more nerves than I knew what to do with. Either way, I was so nervous before the sprint I thought I might puke. Normally, nervousness disappears once you start skiing, but that never happened. I was physically shaking for most of the race, and fell once because of it, and caught my tips in the snow on the narrow trails a lot as well, unable to calmly pull them out. If you want to read more whining, you can read the race report on my training log, here. 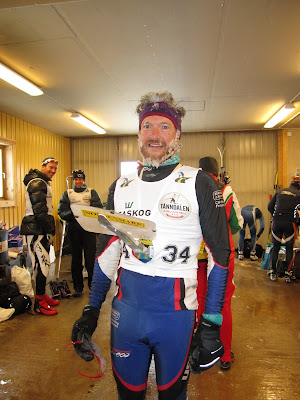 Adrian after the middle race - only a small blizzard...

By Wednesday morning, despite a pretty horrendous night of sleep, I had my nerves back under control. The race went off under some sweet blizzard conditions, howling wind, dumping snow, all that good stuff. It wasn't really much of a problem, since everybody is at the same disadvantage since nobody can see anything, except that all the small trails got blown in, so you couldn't see where they went. Since ski-o navigation mostly relies on trails to create route choices, this is problematic. I had a lot of trouble with navigation, and made a lot of mistakes. Like, a LOT of mistakes. Pretty much every control. I haven't looked at the splits yet, but I wouldn't be surprised at more than six minutes of mistakes. Sigh. I ended up 30th of 53, which isn't a bad placing, but I was not happy with the race.

Again, you can see the control-by-control whining on my training log. That may have been my worst ever international event, but the fact that I was actually able to control my body and SKI (even if it was in the wrong direction), meant I felt better about the race.

So I certainly don't feel good about the first two races, and when there are only three individual races, that leaves a lot of pressure on the last one. I'll be trying to control the nerves, and hopefully I'll remember that ski-o is wicked fun. Racing aside, the team is pretty great this year - spirits are high, and everyone gets along. This is more important than you'd think. 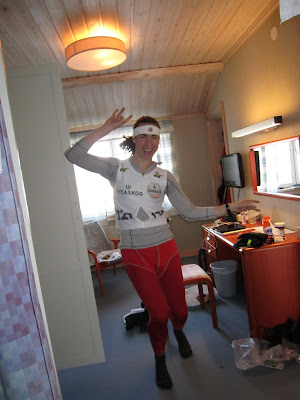 Race mornings start with Ali dancing around the room in her long underwear to "Spice up your life". 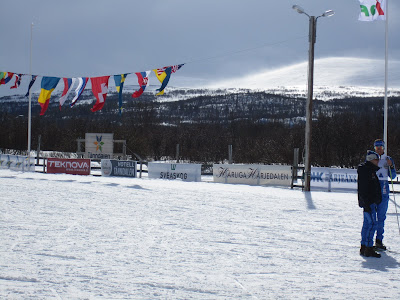 Check out the wind blowing snow off the mountain. This same wind brought in the blizzard, hopefully by tomorrow it decides to clear out... the organizers are certainly having a headache about all this snow and wind!

Tomorrow is the team relay - one man and one woman, each country gets one team. Naturally, I had hoped to be the one skiing, but my performances so far have certainly not provided any reasons to put me on the team, and hopefully Ali will ride high on the success of her last two races. She's pairing with Greg, who was the top American for the men both days. I am super duper psyched to cheer for them, and I think it'll be an exciting event to watch.
Posted by Alex at 3:28 PM