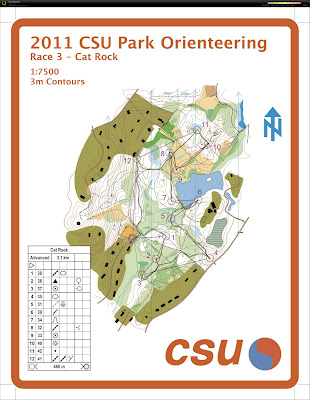 Ed was swayed by the awesomeness that people have been producing overlaying maps with google earth and headcam footage, and bought a headcam. I tried it out last Thursday night at the park-o at Cat Rock, and discovered that while it's a bit annoying to have on my head, there are a lot of good training opportunities to be had from it. For example, I discovered that I bash through branches head-first, mostly, and that I breathe really heavily. Of course, the problem with running with a headcam is that you know people are "watching", so you are trying to run really, really fast. And this leads to more heavy breathing. I attempted to narrate my way through the video, but it's hard to talk when you're going at race pace, so mostly it's just heavy breathing, and some wheezing near the end, for good measure. Luckily all that heavy breathing was good for something - I was second on the day, just over a minute behind Ross, which will probably never happen again in history. Granted, I think I was working harder than everyone else out there...
Results, Ed was directing the meet, so he didn't run.

Click here for the map-video-google earth integrated awesomeness. It's pretty darn cool.
Posted by Alex at 7:32 AM