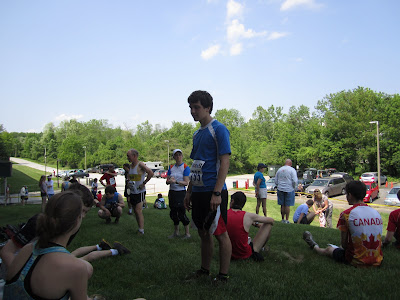 We finally have hot weather - summer has arrived, with all the humidity, bugs, and thunderstorms you'd expect in the NE. Just in time for team trials! The way it works in US Orienteering is that to make it onto the team representing the US at the World Orienteering Championships (WOC), you need to be the top five runners based on three of four possible scores - the first score is your scaled ranking from A-meets around the country in the last 6 months, and the other three scores are you points from the sprint, middle, and long distance race at Team Trials. So, Team Trials is sort of a big deal if you want to make the WOC team. You are allowed to petition if you're already ranked in the top 5 in the US, but I don't fall into that crowd (yet).

Earlier this spring, Sandra Zurcher and Erin Neilson announced that they weren't going to try out for the team this year, for various reasons. Last year, we had one of the strongest women's teams we ever had, with Sam, Ali, and Sandra all qualifying for A-finals in various races, and Pavlina only a few seconds out from qualifying for the A final in the middle distance. I don't belong with those runners - they're legit elite orienteers, and I'm a scrub who plays ski-o. But, I've been getting faster, and when Sandra and Erin announced they weren't going to go this year, I realized I had a shot at the team. A very legitimate shot - I'm among six "bubble" runners who are all pretty close, but a ways behind Sam and Ali. Unfortunately, given that I've done the bare minimum of A-meets to have a ranking, my A-meet rank isn't very good. In fact, I'm ranking last among all the ranked women who were contesting Team Trials. I needed three solid races to make the team. So, I buckled down and... didn't really do anything special. Because in my head, I knew I had the least international experience of all the bubble runners, and life is stressful these days, so I didn't want to build my expectations.

Adding to the stress, I got rear-ended last weekend, and I'm still dealing with tying up those loose ends. So I didn't have a car for the weekend, but Ian bailed me out, and our car-ful of Ian, Greg, Caroline, and me headed down to Purchase, NY, for the first race of the weekend - the sprint! We arrived with plenty of time to spare, and I did a great warmup, although I probably lost too much water just warming up, because it was so hot and sunny and humid. I felt good, though - relaxed, speedy, light and snappy and smart.

But a minute before the call-up, I felt the fluttery heart thing start, so I sat down. It didn't go away, so I told them I couldn't start. Here's the other thing about Team Trials - like a WRE race, you can't reschedule your start. If you miss your start, you're SOL. And if you aren't ranked in the top 5 in the country, you aren't allowed to petition them to include your time. This may be harsh, but it also keeps things completely objective, which is good in a sport that can allow for a lot of subjectivity if you don't follow the rules. Even knowing that, I was sort of hoping that maybe I'd be allowed to petition anyway - this was clearly a medical situation, over which I had no control. And I couldn't run in the state I was in. The fluttery-heart-feeling is my term for this cardiac arrhythmia thing that I get maybe a few times a year, since age 16 or so - I have seen a cardiologist, and he didn't seem worried that I'd die, so I've just been carrying on with my current lifestyle. This was probably the first time it happened at a really undesirable time.

After 16 minutes of sitting in the grass in the shade, my HR dropped from 238 to 85, and I felt perfectly normal. Well, like 98% normal, maybe a little weak. So, I started the race, since they would at least let me start it - I would deal with thinking about the whole Team Trials thing afterwards. For now, focus on the orienteering. This is what you do: go. 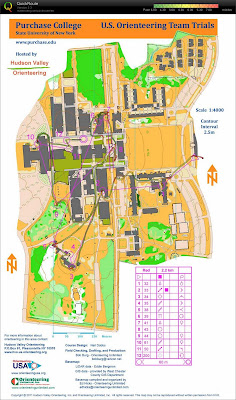 Given that orienteering is a brainy sport, and I'd just spent the last 16 minutes thinking about breathing rather than my plan for the race, I was not mentally ready when I started out. It took a while to get into the map, and I was very stop-and-go, not being aggressive or running hard enough. Things were pretty clean for the first 5 controls, but not very fast or smooth. I then proceeded to do silly things on my way to 6, visiting 7 first (mental note: 6 comes before 7), and getting confused by running past the overhang and the finish with all the people standing around and screaming. I finally found 6, after maybe 45-50 seconds of confusion, found 7, and then came to a complete stop on the way to 8. Stuff had suddenly stopped making sense. Luckily it only took 5 seconds or so for buildings to make sense again, and I found the control. Then things got good - I was into it, focused and flowing and speedy. Too little too late, unfortunately, because even if my time were legit, it was only good enough for 12th, more than 2.5 minutes behind Sam, who won. At least the last third of the race was good, though.

Unfortunately, rules are rules, and there was no way to petition my time back into existence. I wasn't angry about this - if you set yourself rules as an organization, you have to follow them - but I was definitely disappointed. Some things I can't control. Like a heart arrhythmia or ESC rules. I was trying to be all zen about this, but by the time I got back to the car I was biting back tears. I hadn't realized how badly I wanted to make the team until I was out of the running. I was having a real life-ain't-fair moment, bawling my eyes out in a patch of poison ivy in the forest and cursing my body for not being made to spec. My usual rule to myself is that I'm allowed 15 minutes of self-pity after a bad race, and then I have to rejoin society, but this took a solid hour.

After that, time to move on; at least I wasn't completely out, since I did have an A-meet score. It was just a sucky score. There is nothing I can do about events outside of my control, so I attempted to start controlling the things I could for the next race, but man is that ever easier said than done, and I definitely had a cloud of "meh" hanging over my head most of the afternoon. I guess at least I didn't mispunch, like last year. Maybe next year I can have a Team Trials sprint that actually counts. 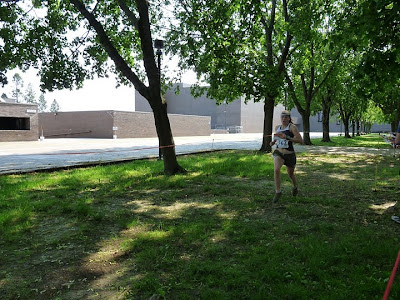