After yesterday's flop, I was hoping for a better race today. It was the long distance, with a predicted high temperature of 88F, and what felt like 100% humidity, so I was hoping that my general mental toughness would triumph over wimpier souls. Before the race, Wyatt Riley pointed out to me that because I had an A-meet ranking, I was definitely still in the game, despite it being not a great ranking score. I decided that it didn't matter what my various scores and rankings were, I was going to go orienteering and focus on what I needed to in order to get around the course as fast as possible. I was starting 3 minutes behind Angelica, 3 in front of Cristina, 6 in front of Hannah, and 9 in front of Sam. Definitely hoping that I would see people out there, although ideally, I wouldn't see Cristina or Hannah, as they are fellow bubble runners and I'd like to beat them. 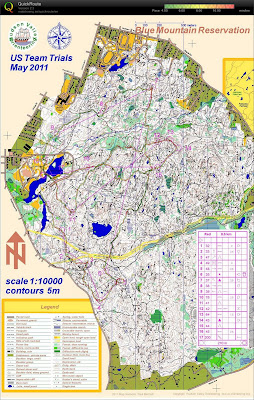 Things started out alright, and I discovered that the map was very technical, lots of knobbly stuff, but also some nice big features to catch you if you made mistakes, so none of my mistakes were all that huge. That said, I managed to bobble on 3, 4, and 5, losing about 4 minutes to Hannah just in those first 5 controls. Then a long leg to 7, and that went relatively well, although I did some goofy stuff in the middle of it, and Sam caught me somewhere along the way. I couldn't run as fast as Sam, but had her in sight for the next couple controls, which definitely makes it easier to find them, and I passed Angelica just before control 8. I was pretty clean for the next few controls, but the heat was starting to get to me, and by #12 I was walking all the uphills and starting to struggle. I managed to hold it together, though, and continued to be aggressive, pushing hard. Pain is only temporary, after all, and I hear chicks dig scars. 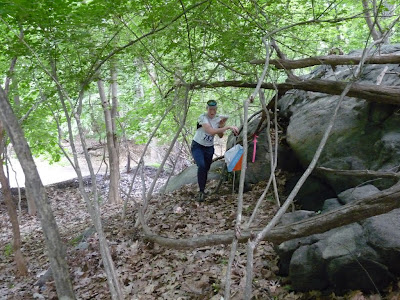 Blurry photo from the spectator control in the Long distance.

In the end I finished in just under 90 minutes (10.6km of running, 8.8km straight-line), a minute clear of Hannah, but 15 minutes behind Sam and Ali. It was good enough for third, which was cool, but I wish I'd just been a little better on those first tricky controls. I guess that's why we keep doing the sport - no such thing as a perfect run. I got a decent score from this race, and suddenly it's apparent that I'm still in - barely - but, still within reach. The clump of Pavlina, Hannah, Cristina, Angelica and I were pretty close, but to move past them, not only would I need to run really well tomorrow, they'd all have to run pretty poorly. I was about to get all stressed about it, but then remembered that there's no point to stressing about what I can't control. I know how to orienteer, I know how to run a middle in technical terrain - I just have to go out and do whatever it is I do to find controls tomorrow. No biggie. And if I don't make the team, it's totally legit - I just wasn't fast enough. I can live with that.

So with that in my mind, I had a really great afternoon playing boggle outside, hanging out with a lot of my favorite people, and in general, having fun. Because that's also something I can control =) 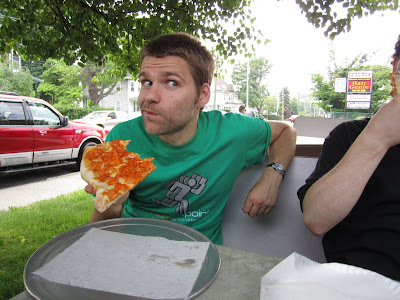 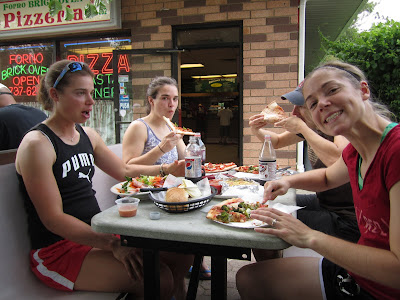 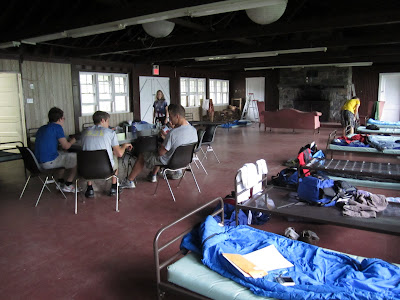 About 25 people were staying in a huge cabin near the race site; it was a fine situation except for how stuffy it was inside, and the occasional snorer. I slept maybe two hours the first night, but at least that meant I slept like a log the second night! 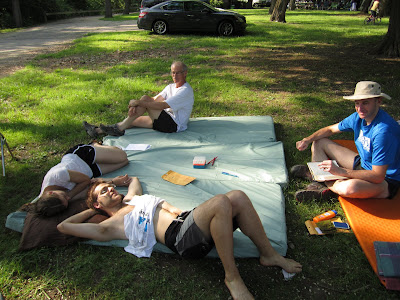 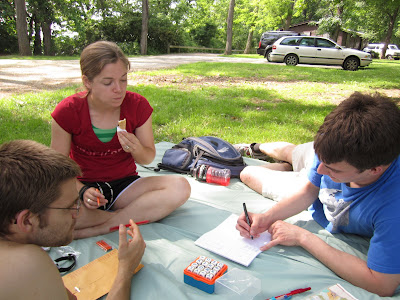 Due to the stuffiness, we moved mattresses outside in order to play boggle. Also, the ice cream truck stopped by the campground, and that really made my day!
Posted by Alex at 12:21 PM