There are way too many U.S. Championships for summer orienteering, but the two big ones are the Classic champs, that consists of two days of racing and you add the times together to get an overall winner, and the Individual Sprint/Middle/Long championships, where each race produces a separate champion. This past weekend was the classic champs, and the courses were pretty long and gnarly, in the marshy/deerfly sense. I was a little nervous about this, since it's orienteering, and I haven't really run in the forest since twisting my ankle, but I have a new fancy ankle brace, and I was able to avoid re-spraining it, which is really the goal.

The first day starts weren't until almost noon, so it was pretty hot and humid. The deerflies were also out in force, which wasn't too bad while you were moving, but they started feeding if you slowed down to read the map too closely. This was probably good for me, because it kept me moving, but when I made a small mistake near 5, they moved in for the kill. Overall, the course went pretty well for me, but deep ferns meant that I kept my running to a pretty cautious pace, so as to not re-twist my ankle, and so I never really felt like I was pushing hard enough. Below is the map, with my route. 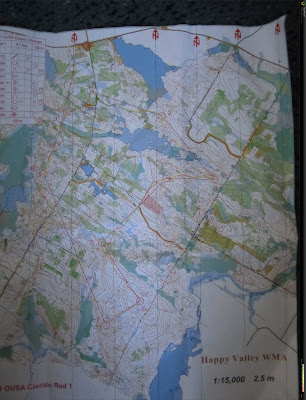 I ended up 2nd for the day, just ahead of the usual rivals of Angelica and Anna. Ali had destroyed us, and finished way out front - probably not going to catch her on the second day!

The second day's course had fewer ferns, so I could run a bit harder, but then I couldn't find control 6. At this point, I like to think that I know what I'm doing out there, but I got to the point where the control should have been, and there was no control. I figured I must have gotten off the perfect path somewhere, so went to a different point to re-attack the control. I ended up at the same place. Frustrated now, I headed out to an even more obvious point to re-attack, and as I approached, was overtaken by Andrew Childs, a very fast junior runner who just returned from the Junior World Orienteering Championships. When he also couldn't find the control, after leading us to that same spot, we determined that it just wasn't there, and headed off to 7. Which also wasn't there. One missing control, and you're like, well, ok maybe they put it in the wrong spot. But two in a row, and you're starting to doubt everything. 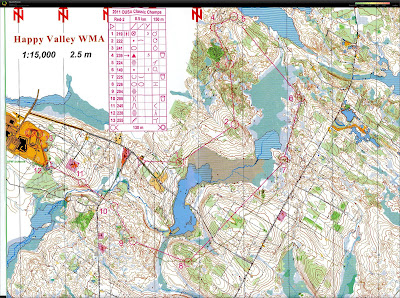 It turns out that an over-zealous control picker-upper from the day before had removed those two controls, since they were used on both Saturday's and Sunday's courses. Somehow, vetting the course in the morning had slipped through the cracks, and so because the course was missing two controls, everybody who was running the red course had their course thrown out, voided. A big bummer, because the reason to go to these meets is to get ranking points, to contest the US championships, and in general race on a course that has all the controls in the right places. There were some really upset racers, but what can ya do.

I kept running after the second missing control, but my give-a-damn was pretty damaged by then, and I had trouble motivating myself to push hard. Then I made a mistake on the penultimate control, and just couldn't find the darn thing in the circle. Blah.

So, they used just day 1 for the championships, and I ended up 2nd! This is the first A-meet where I've ever finished inside the top 5, and it happened to be the US champs, so I'm pretty psyched. 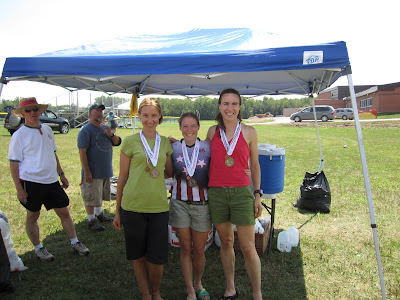 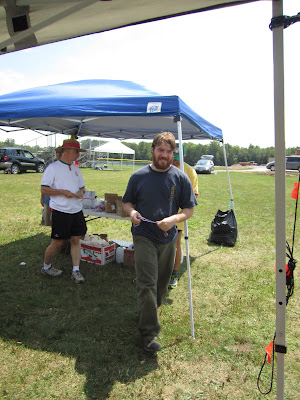