Back in the US of A

I made it home without any hangups, only to discover that a week of limited internet, even when you claim it's for vacation, leaves you pretty backed up. I managed to get my life under control by the weekend, and even managed to have some good fun, hanging out with the western mass renegade O' club. (We don't have an official name, but this seems about right to me. We should look into some OUSA sanctioning). We figured that with Hurricane Irene heading up the coast, we should head into the woods for one last orienteering session, before all the trees got blown down and it became impossible to run fast. So Saturday morning found Peter, Phil, Ali and I on top of Mt. Tom, ready to tackle an old red course from an A meet in 2008.

Peter went out first to hang some streamers, and a couple minutes later, I went chasing after him. I hadn't been planning to run hard, but advice I'd overheard was in my head - don't run faster than you can orienteer. Conversely, run as fast as you can orienteer. I quickly found myself pushing, trying to go fast enough to keep the navigation on the edge. It was really fun; Mt. Tom is open and fast, where it isn't too rocky, and compared to the crap we were running through in France, it was pure heaven. Better footing than any of the French trails, even. 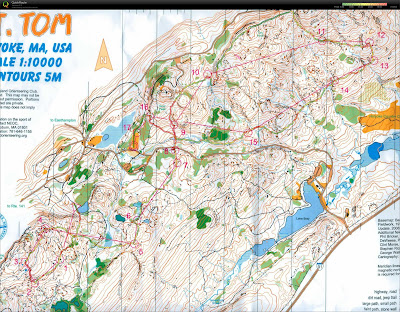 Anyway, it was a really fun way to get outside, but I soon found myself tiring on the uphills, and losing a lot of time there. Come on, body, I thought you were in shape?!? I managed to catch Peter, a major life goal of mine, but Ali put a ton of time on me in the last, hilly, section of the course, and Peter dropped out because he felt crappy. Good to train with faster people, but sometimes a little disheartening, too. I finished the course, and ran up to my friends screaming "I LIKE orienteering! It's fun!" I guess I'd been missing some of that in France, where it was all slow and technical with rough footing.

Then along came a hurricane, and although the Berkshires were getting hammered, Amherst seemed to do ok. A monday morning rollerski along the Connecticut River showed some sweet flooding, though - aren't floodplains beautiful when they're working properly? Makes me happy. Of course, Hartford used to be a floodplain, and now it's filled with impervious surfaces... bet there're some wet basements down there. 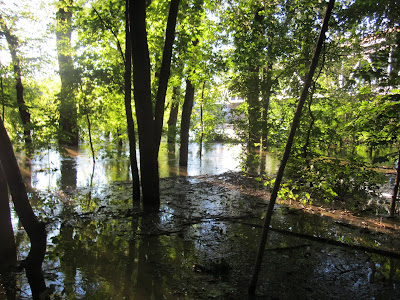 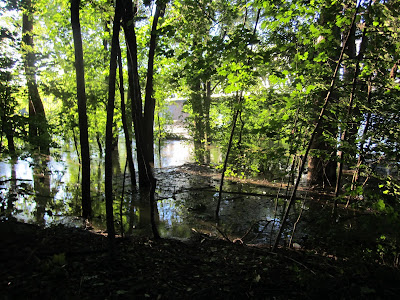 I don't talk about work much on here, because this isn't a work blog, this is a fun-other-random-crap-I-do-with-my-life blog, but there is definitely a knot of anxiety in my stomach that every temperature logger I have in both the Westfield and the West River watershed has been ripped off it's cabling, or the tree to which it was cabled is now gone. Unfortunately, that investigation will have to wait until after I return from West Virginia, where I get to go for the next two weeks to play in rivers shocking fish. I should wait and see how many loggers are actually gone before I make dire predictions about how I lost 8 months worth of data, but let's just say I'm a little worried. 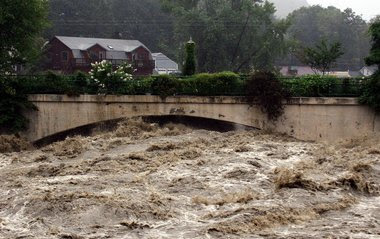 Not much hope when the mainstem looks like this. Photo credit Jeff Brown.