I used to make fun of weekend warriors, but it appears that's the road I'm heading down. Not enough time during the week to do all the fun stuff I want to do, so I packed it all in during the weekend. Of course, it helps that it was the Pawtuckaway camping weekend, which usually has five thousand things going on all at once, so you don't even get a minute to sit still. There wasn't a mountain bike O' this year, which was actually a good thing, because I really didn't need yet another excuse to go breaking myself. As it was, the weekend was really good fun with some great socializing, as well as some nice orienteering. I managed to actually follow my training objectives, an impressive feat, and I had a great time during the Wicked Hahd Night-O. 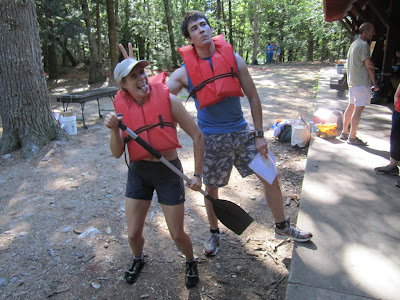 Ian and I preparing for the canoe-O. We did alright, but it was clear that we'd never paddled together before. Importantly, though, we beat Ali and Brendan. 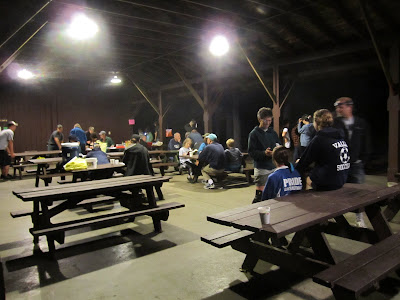 Hanging out in the pavilion waiting for it to get dark enough to do the night-o. 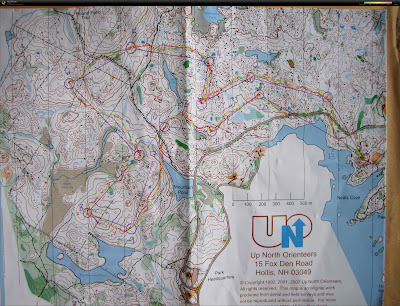 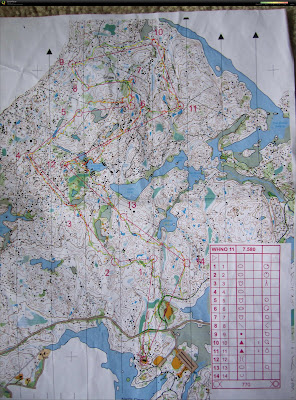 The night-o was really fun. It was a mass start, and sort of a small crowd this year. I have a new headlamp that I haven't actually tried out orienteering before; it's a Magicshine, and it's very bright. Almost like cheating, to have it be so bright! I certainly appreciated the extra illumination, because Pawtuckaway can be really scary at night. JJ started us, and I soon found myself with Ali and Carol, as well as a bunch of the old-but-accurate crowd. In some ways, night-o is almost easier than in the daylight, because you can navigate off other people's lights as well as your own, and the flags are very reflective, and hung very high. Carol, Ali, Jim, Ernst, and I were in a loose pack for most of the first 9 controls, including through the boulderfields of death on the way from 3-4. We could occasionally see Ethan and Andrew Childs dashing away from controls - they're both juniors, and both really fast, but not necessarily that accurate. Luckily, they're fast enough to make up for it.

Leaving control 9, Ali decided it was time to get serious, and that was the last I saw of her. I hung on to Carol to 10, but then my give-a-damn gave out, and I sort of bumbled for a while to 11, alone. We'd dropped the old-but-accurates, but we'd also dropped me. Sigh. Someday, I hope I'll be fast enough to keep up with the speedy ladies. I tried to motivate myself a bit more heading to 12, and it sort of worked, except that I had no freakin' clue where I was. I figured that since I was being good about compass, I would just keep going until I hit the perpendicular string of water features, but I wasn't exactly confident that I wasn't going to be eaten alive by rabid wolves. Running alone in the dark is scary!

At 12, I saw Jim, and realized that I'd lost however much time to him on my last two wobbly legs, so it was time to get serious again. Easier said than done, but I managed to run away from him by 13, and then it was just a struggle to the finish. I ended up 5th, behind the Childs boys, Ali, and Carol, and this was also the first Wicked Hard Night-O (WHNO) that I'd ever completed, so I felt pretty good about life. To make things even better, there were some s'mores left over for us WHNO runners to snack on! 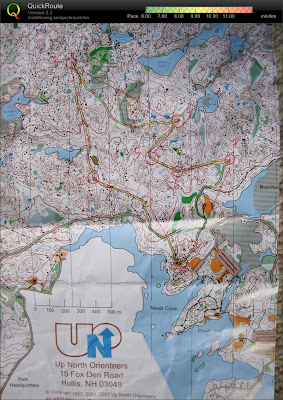 Sunday, I was definitely feeling the efforts in the forest from Saturday, and it took a decent warmup before I felt like I could run. I ran a shorter course, but did it twice, trying to improve upon the first time. I did, but barely, since I just wasn't moving all that fast. All in all, that made for two first-place finishes over the weekend - the red course Saturday, and the brown course Sunday. Not that it really matters in a local meet, but it's still nice!
Posted by Alex at 9:37 PM