I guess that title is only funny if you know that the temperature loggers that I use are the HOBO brand. Anyway, I've been spending a good bit of time recently going around and drowning hobos. First stop was the West watershed, in VT, and that was interesting - the entire state was basically trashed. I had some major issues getting around, just because of road closures, but in the end I made it to most of my stream sites. What I found there was pretty shocking - mostly related to the stream picking up and moving its channel to the other side of the valley or something. 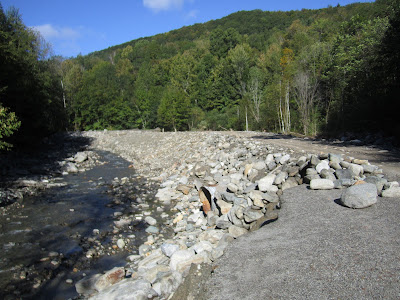 Look ma, no road! The first stream I hit was Bellows stream, near Marlboro VT, and that stream had decided that it wasn't happy with its current location anymore, and took out the road that used to parallel it. That bank of stones - that used to be trees. My temp logger was cabled to the roots of one of those trees. Not anymore! Despite the devastation to both the VT economy and my project's data availability, this was really cool to see. Nature is awesome! 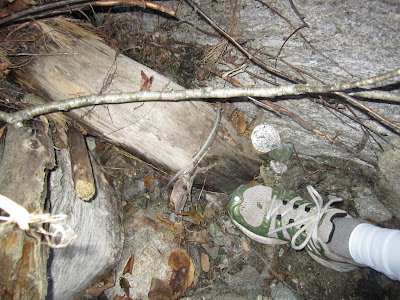 I found my logger at this site, but I'm not sure I can extract it without bigger tools than what I've got. That loop of cable, next to a loop of wire, are both theoretically connected to my temp logger. This tree used to have flowing water over it. Oops. 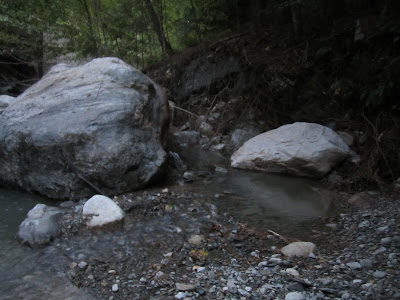 New boulder. Not sure where THAT came from, but it must have made some noise.

One of my loggers is way up on the Winhall river, only really accessible via the Appalachian Trail. I called up my trusty running buddy Ken, and we headed out on a really nice run, over Stratton Mountain, past Stratton Pond, check on the logger, and back on a side trail. Overall a very nice loop, but that takes a solid 4 hours out of your day to cover that much distance and elevation! 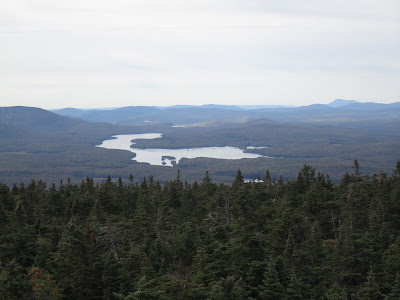 The view from Stratton firetower was great, as always! 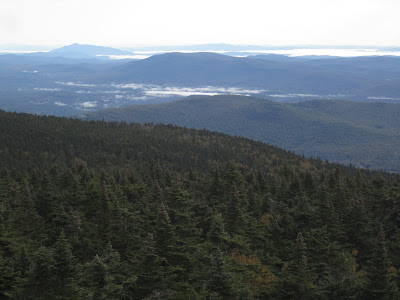 I followed up that hike with some quality time helping Ed make apple cider, before it was time to continue on to Maine, and see how the Sandy River watershed had fared. It was a pleasant surprise to find all my Maine loggers! 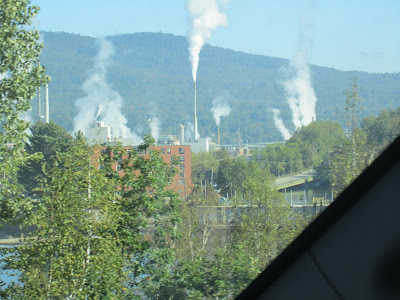 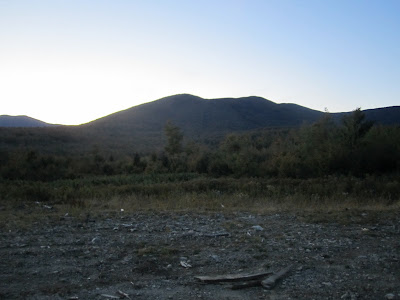 Having a 4-wheel drive vehicle made for much quicker work getting to some of the places I had to go; a lot of the logging roads were pretty washed out, but the truck could handle them. No more 20-mile runs for me! Here's looking at the backside of the Saddleback to Sugarloaf ridge, from the upper side of the Hardy River, as the sun was setting.

I finished up all the driving around by Tuesday afternoon, and since I was right there, took a detour to Mt. Blue state park, just to check it out. I parked the truck on a little overlook, and had a really wonderful session of core strength and some yoga, overlooking the misty western mountains of maine. It was exactly what I needed to unwind before the long drive home, and I really did succeed in finding some inner peace, watching the sun rays stab through the ever-changing clouds. Very glad that I stopped for that, as it made the long slog home a lot more bearable. 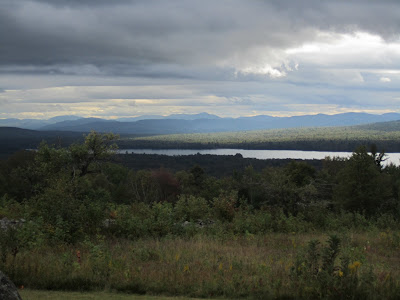 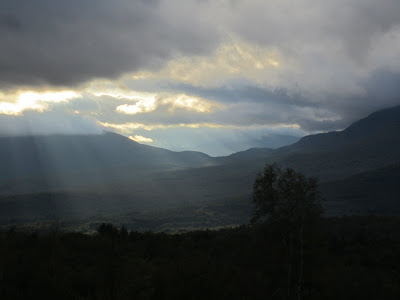 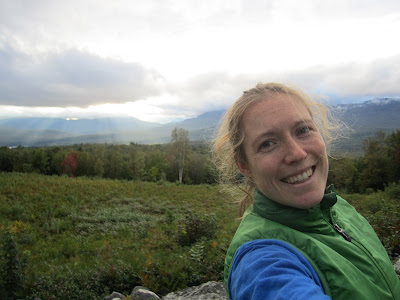 windblown, dirty, tired, hungry, happy. Ready for some civilization and some conversation other than my own. 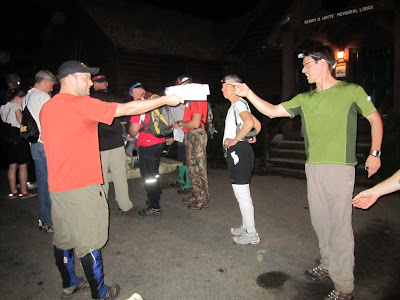 When I eventually made it back home to Newton, I discovered that Ian had set up a legitimate night orienteering race out in Nobscott. Ed and I charged our headlamps and went to check it out, and we had a really great time. Ali crushed me, but she also crushed everyone else, so that's ok. I was still second, and beat all the boys. It was amazing how popular the night-o actually was, we definitely hadn't expected so many people! Above, Keith and Ben are pointing at each other. I forgot why, but the photo made me chuckle.

Next up: a 12-hr MTB race. If you have any idea how little I've been riding my bike, you know this is going to be an absolute pain-fest. At least I'm on a team!
Posted by Alex at 2:38 PM

What? You're choosing a mountain bike race over the Highlander? Silly you.