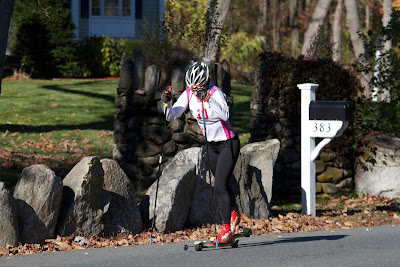 Jamie Doucett has been holding a rollerski race in Andover for a really long time. 23 years. As far as I can remember, this was my third time doing it, and so far, each time has gotten faster, although this year I only nipped 2 seconds from last year's time. My body seems to remember how fast I'm supposed to go when I'm ski racing, and it just sort of goes that speed, until it can't anymore. So then I dug deep and held on for as long as I could, and it was enough to win! For the women, anyway.

It was a pleasant day, although it started out a bit chilly. There was a good group of skiers, mostly from Harvard and CSU, but a couple from further afield, as well. I love pack racing. I was kind of worried about my fitness - I really haven't been ski training as much as I know I should be, and I know that this course is relatively flat, which means a lot of double poling. But I figured it would also just be a nice reality check - how bad IS my upper body strength right now?

We took off, and the pack quickly thinned itself on the first uphill. I kick-double poled the whole way up, which isn't something I've done before, but it seemed faster. We got to the top, and I was dangling behind Bob Burnham and Ben Smeltzer, with a thicker pack ahead of them. Unlike the last time I did this race, I was not exactly killing it on the double pole sections. In fact, it may be more accurate to say I was getting dropped. Jamie passed me at some point on the long flat bits, and I thankfully jumped in his tall-person draft. I hung on his tail through the rest of the lap, passing two other fast starters, and even leading up the far hill, but as we came through the start/finish I knew that this whole drafting thing wasn't going to last much longer. He had already gapped me on the flat bit, and I couldn't make up the distance up the first big hill. I could see Bob still dangling ahead of me, but once Jamie caught up to him, it was all over. I could see them for most of the rest of the lap, trying really hard to catch up, and feeling more and more jarred by the pavement as my body just refused to cooperate with this whole "strength" thing I was asking it to do. Going through the motions, but nothing is happening.

By the time I finished, even my butt was sore. I couldn't bear the thought of one more kilometer on skis, so switched to running shoes for a cooldown - apparently, I'm not nearly as ski-fit as I'd like to be, but I can still squeeze out a result - I just suffer for it. Tomorrow should be fun.

But, I won! And, I broke my previous "record" by 2 seconds, and I'll take any improvement. I did lose 2:15 from the first to second laps, but hey, I'll keep my strategy of "start hard, then hang on" for mass starts. When it works, it's golden!