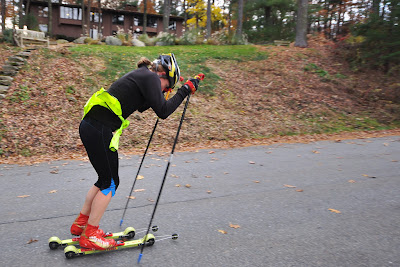 Thanks to some elbow tendonitis, I didn't do any double pole time trials last year. CSU has a decent set-up for this - we do four repeats of a fairly steep hill, and just add the times together to get a final time. This is a good representation of both ski specific strength, and of strength endurance, and it correlates pretty well to performance in the Eastern Cups and junior nationals, for the juniors. Using this and the 3000m run, Frank can predict with good accuracy if a kid is going to make it to JNs or not. I feel like at this point I'd have a good shot among the J2 girls... 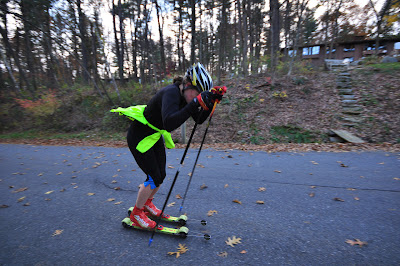 Jamie was standing at the top taking photos of us; I do tend to go faster if I know there is a camera around the corner, but sometimes there is just nothing you can do about going faster. Looking at the photos, at the very least I have a good forward starting position - my abs were definitely sore the next day! Unfortunately, things collapsed pretty quickly after the nice forward lean. Muscles what? I did this test in September, and finished in 13:18 - not a horrendous time, but not exactly something to be proud of. I was hoping to break 13 this time 'round; that would be just 5 seconds faster per lap, I can do that!

Ali graced us with her presence, and we both did some fun orienteering training in the morning. A quick stop for lunch, and then it was on to Concord for the DPTT. I definitely still had some lunch rattling around in my stomach, but at least it stayed put! A big group of juniors out for the test, but it ended up getting pretty spread out, as everyone takes a different amount of time up and down the hill (well, the down is supposed to stay pretty constant around 5min). Ali and I stayed pretty close, but she was beating me by about five seconds each time. We started out fast - 3:00 flat, and I knew I was in for a sufferfest - when you can feel the lactic acid pooling on the first time up, that's not a good sign!

We started the second rep with Olivia and Jacob, and while Ali pulled away early, I held even with Jacob. He's been working hard on his double pole, and the technique gains were obvious, as I couldn't drop him. My upper body was definitely tiring, and while focusing on good technique had gotten me up the hill, I was in search of more oopmh. At least the burning seemed to subside a bit; maybe I just did need more of a warmup! The third one we had some of the younger juniors to hunt down, and knowing that I was more than halfway done helped with my effort, but it wasn't easy. I managed to cut off two seconds from the second rep, and my arms were shaking by the top. The whole way down I was just dreading the last one - this test hurts so much! Off we went, though, and I kept repeating to myself "Bjorn Daehlie never slips". It was a good mantra, and got me to stand up enough to get my poles into the pavement without them slipping out; but I just couldn't move any faster near the top.

I ran a PR for my 3000m back in September, too, so maybe I am in better shape after all this running than I thought. One more 3k test, on Thanksgiving, to try and break 11:30, and then it's time to strap on the skis and see what I can do. I can't help myself - I'm excited!
Posted by Alex at 9:44 PM