Rochester, and other shenanigans. 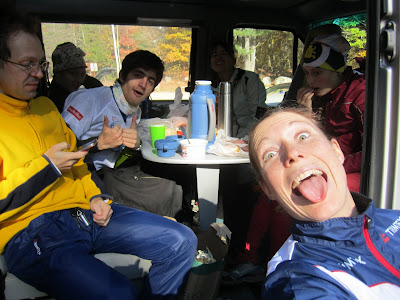 It's really been too long since I posted an artsy portrait of myself. This one is from a recent training event at Pawtuckaway, and features Vadim, Giacomo, Katia, and Lori.

Last weekend Ed and I were in Rochester for the Honeoye Falls Ski Swap, selling rollerskis - while it may not be the best time to be trying to sell rollerskis, at least it wasn't actively snowing at the time, and I think we made some good contacts. Supposedly this networking stuff is important, so in the sense that we sold enough stuff to cover gas, bar tab, and sushi bill, I think we had a very successful trip. 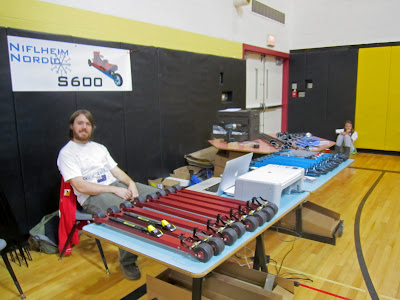 But then Ed decided that he wanted to stay in Rochester longer, and I really didn't have that option - had to be in Amherst at 8am this morning to take my comprehensive exam. First off, who gives masters students a comprehensive exam? And secondly, well, I'm an idiot, and I thought I could take the test next semester, but it turns out I can't, because that'll be my last semester, so I had about a week to cram in everything I could possibly know about ecology and quantitative ecology and human dimensions of ecology and research concepts. Luckily, I paid attention in those classes in undergrad because I found them interesting, so I remembered most things. Haven't seen grades yet, but I'm reasonably certain I didn't just fail out of school.

So Ed is still in Rochester, and I took my car home. This only works because his parents are heading to Boston for Thanksgiving, and he can get a ride with them. But it means I'm home alone, and between the post-exam relief and the general burned-out-ness I've been feeling lately, it meant that I was contemplating eating peanut butter for dinner. But then I was like, "no! I can't do better than this! I have cereal!" And then I realized that real adults don't eat cereal for dinner, so I cooked a cabbage. And now I'm sitting on the couch in the dark, eating cabbage, listening to the dixie chicks, and feeling like maybe I'm missing something about this whole "real world" thing.

Lots of stuff has been going on and I've been wanting to write about lots of stuff, but unfortunately haven't really had the time to do it. Not like that'll be improving, since I'm heading out into the field soon to collect my temperature loggers from the West and Westfield watersheds, and once I have the data I get to spend all my waking moments frantically analyzing. Wooo!

Couple cool things - orienteering has actually been getting some press, lately. First, we were on NPR! Doug Tribou from "Only a game" showed up to the Middle distance orienteering championships, and interviewed a bunch of people, and then they ran a 7-min story on orienteering. Super exciting! You can read the text and listen to the story here. Also on the orienteering publicity side of things, the Boston Globe ran a story about the New England Orienteering Club, and I thought it was a nicely rounded article. Read it here. And it doesn't end there! Sports Illustrated interviewed Alison Crocker, in the faces in the crowd section - here. This is probably orienteering's highest profile appearance in the US since Peter Gagarin was featured on a Wheaties box. Cool stuff!

I've been slowly trying to shift from all orienteering training into doing some ski training, but honestly, it's just less fun. Coaching is a good time though, and I think I'm doing pretty well in my goal of having all my girls be faster than me this winter, and not just because I'm old, tired, and crippled. Right now I think four of my seven will kick my butt, but that's good, since I don't think I could make junior worlds right now =). Anyway, couple weekends ago I was helping Rob coach the Gaining Ground clinic in Sudbury, and that was really a good time. Good mix of masters racing for themselves and coaches looking to keep up on the latest stuff. 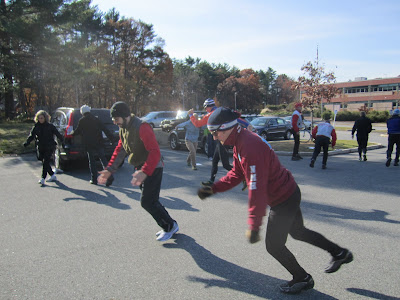 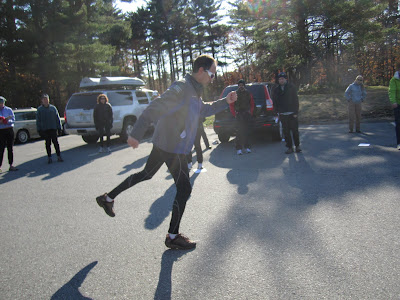 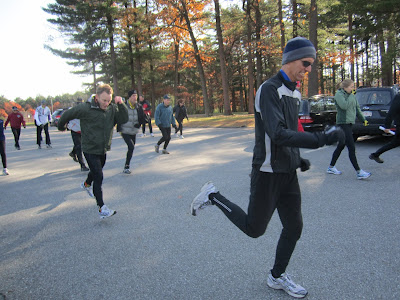 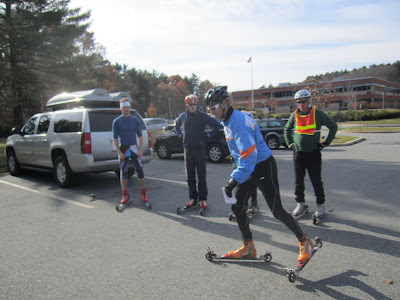 And take it to skis. Mostly quick learners, and that makes it really fun.

The Sunday after that clinic, Ed and I headed to the Blue Hills to set streamers for the Blue Hills Traverse, that was just run last Sunday. This is only notable because I picked up a tick, the second bite of the season. Given that one guy had 18 ticks attached by the end of the traverse, we need some hard frosts, now! I hate all blood-sucking critters. More so when they carry diseases. It's actually also notable because Ali won the traverse - like, the entire thing, and kicked all the boys' butts. I was in Rochester, certainly a good move for my ego.

I think that may be enough rambling for now. Something more coherent may come after the 3k time trial I'm running on Thanksgiving morning. I leave you with happy photos from last weekend. 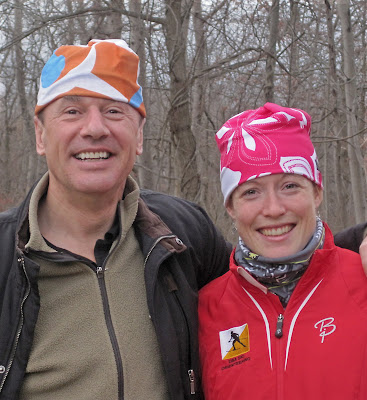 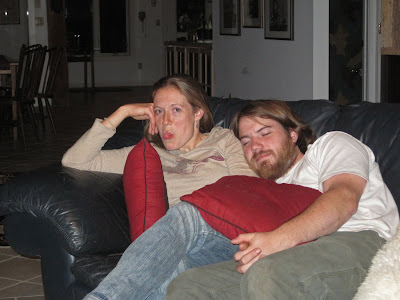 Mama, stop taking photos of us! 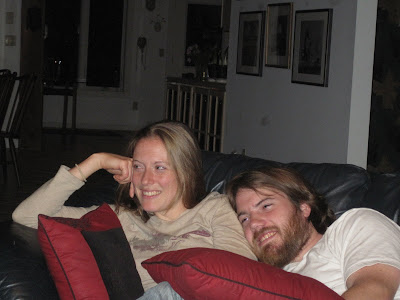 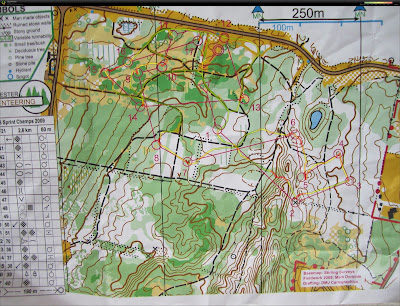 A map! This one from the 2009 A-meet in Rochester, where I totaled my ankle. I finally went to re-run the course, actually as threshold intervals. It was a really solid workout, and a lot of fun. Speaking of workouts - I've finally gotten a chance to really test out Ed's classic skis, so a review of those will be coming shortly. Hopefully before we start skiing on snow!

Damn, the cabbage is gone and now I'm hungry again. Time to head for the peanut butter.
Posted by Alex at 8:34 AM

Why didn't you put the peanut butter on the cabbage? That sounds sort of gross, until you think of it as peanut sauce.