Memory training at the Fells 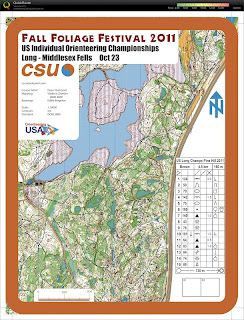 One of my process goals for next year is to run faster when I'm in the woods.  Close that gap between woods-speed and track-speed.  Another of my process goals is to read the map better when I'm running.  A partner memory exercise addresses both these goals!  Woo!  The way it works is that the first person memorizes the first leg, then hands the map to the second person, who memorizes the next leg, while following the first person to the first control.  Then you switch the map again, and second person leads the way, while first person memorizes the next leg.  It's a great exercise, because you tend to run a little faster when you're not holding a map, and you also look around a lot, another good thing to do.  When you're following, you're forced to run a little faster also, to keep up with your partner who is running a little faster because he doesn't have a map.  At the same time, you have to plan your route and memorize it for the next control!  All these are good things.

Magnus and Brendan joined me at the Fells Sunday morning, and we alternated leads.  It had rained all night, and somehow that made the forest feel easier to run through, slipping between trees unobtrusively and smoothly.  It also helped lower the temperature, to a perfect running weather, with occasional drenches when a tree would shake its water onto your head.  Although my achilles started to ache a bit by the end, I couldn't make myself quit, I was having too much fun.
Posted by Alex at 7:41 PM