With my departure for WOC fairly imminent, and no orienteering races scheduled, if I wanted a race effort, I had to make up my own race.  I decided to run a middle distance race from the A-meet that CSU held in 2010, on the west side of the Fells.  I had run the women's semi-final/qualifier only that day; my knee had been bugging me so I remember consciously deciding not to run the final.  At some healthier point, I'd gone back to run the final, which I'm sure was fun, but this time round I wanted to run something I hadn't seen before, so I ran the men's qualifier.  At the height of summer, the forest looks a lot different than it does in October, so I definitely expected slightly slower times than the boys had run in a more open terrain.  But the object was to do the full preparation of a race, attack the course hard, and run it cleanly and smoothly.  You want confidence-building workouts before the big one, not necessarily the super hard technical stuff. 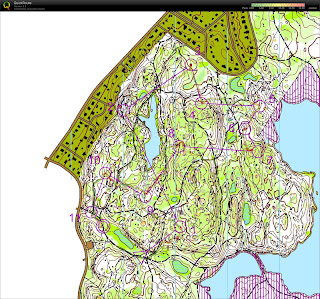 I arrived at the Fells around 1:30pm, and it was 98 degrees.  Even in the shade, that's hot.  Did a good warmup, and mentally focused myself.  Then off I went!

Right off the bat, I made an error.  My goal for the race was to have good solid attackpoints, and to keep my head up and looking around as I ran.  On the trail to 1, I was reading ahead on the map, and totally lost contact.  When I looked up again, I was suddenly quite worried that I'd missed my attackpoint, and so, not really knowing where I was, I dashed off the trail and into the woods... too soon.  It took me an extra two minutes to find my way to #1, which is really just embarrassing.  You want to nail the first control, to set the mood for the course.  I made a similar mistake again to 9 - no attackpoint off the trail, and then a long mistake wandering in the woods looking for the right feature.  D'oh!

1 and 9 aside, I did make some other mistakes, the worst of which was probably heading down the wrong trail from 7-8.  The Fells has so many trails that you want to take advantage of them when you can, but you have to make super duper sure that you're on the right trail, before dashing off.  Overall, though, I felt that I was moving very well through the woods, at least when I was going in the right direction.  An estimated 4:15-5min lost on that course, which isn't all that acceptable in a middle distance race.  I have to do better than that.  But I can't help but feel good about the training, and I think this is great - I need to keep that positive, aggressive feeling!

I added my splits to the results, just so I could see where I stood.  A fairly consistent 16th-17th place for most splits except where I made mistakes, ended up 19th out of 29 dudes who all had faster conditions.  Not too bad, but definitely some room for improvement.
Posted by Alex at 12:38 PM