A few weeks ago, NEOC hosted an "urban ROGAINE", (ROGAINE stands for something like rugged outdoor group activity involving navigation and endurance - basically, a multi-hour orienteering race.  has nothing to do with a hair product), that could be completed either on foot or on a bike.  There were two categories, either a 1.5hr or 3hr time limit, and cyclists and runners were scored separately.  Naturally, I was interested, and so was Ed.  Unfortunately, I had to head out to Littleton for some rollerski action first, but the organizer was very accommodating and let me start out and time myself as the last finishers from the mass start in the morning were trickling in. 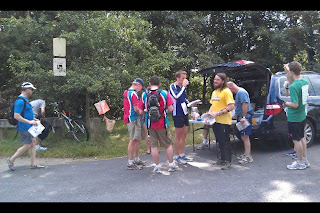 Ed opted for the foot approach, but made some key navigational mistakes.  oops.  I was on a bike, which obviously let me cover more ground, and the final results have me in the lead.  Results.  However, Joe and Jeff cleaned the course, and if it hadn't been for a broken chain causing them to come in way overtime, they totally should have won.

It was a neat format - instead of hanging controls, you had to answer a question, that was written on a clue sheet you had to carry with you.  I quickly realized that the whole deal surrounding answering the clue would be the most time consuming part of the process, so I came up with a strategy.  We got 15 minutes to look at the map and plan a route before the clock started, so once I'd decided on a route, I wrote down the order of the checkpoints on my control card.  This would help me figure out which one I was going to go to next.  I also wore my ski-o map board, so that I could read the map while on the go, and also, slide the clue sheet in and out from the map board as I rode along.  This being urban riding, I didn't want to have to take my hands off the handlebars for very long.  I had a pen and a pencil in my bike jersey pocket, as well as the usual emergency stuff like a spare tube, allen wrenches, and dried figs.  I would memorize the clue for the next checkpoint as I was leaving the existing checkpoint, and pull out the pen or pencil as I approached the next checkpoint, looking for the right telephone pole or fire alarm box, in most cases.  This did make for a bit more strategy, but it was manageable.

Answer sheet.  It was large and cumbersome, but slid nicely in and out of the ski-o map board, as did the clue sheet. 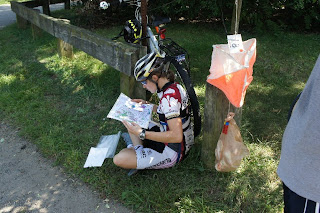 15 minutes to study the map and plan a route. 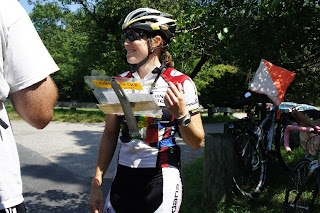 Map board did not interfere at all with riding the bike, except in terms of aerodynamics when I was in the drops - it doesn't fold up under my chin as well as I'd hope it would.  But it didn't seem to make riding a bike any more dangerous than usual. 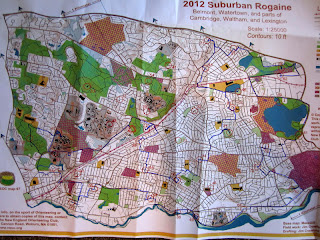 This is the map.  The blue line is my route, drawn in.  What do you think is the most efficient route?  I knew I was operating with tired legs, so tried to avoid any hills that looked too big, but I also knew that higher-numbered checkpoints were worth more points, so I wanted to make sure I hit those ones.

In the end, I think I won (not counting Jeff and Joe's broken chain and overtime) not because of cycling speed or a good route, but through a mix of minimizing time losses at the controls, and comfort in riding through traffic.  Local knowledge definitely helped, too.  I think if I had been riding a cross bike or mountain bike rather than my road bike, I could have picked up a couple more points - I didn't feel like going too off road, and some of the higher-point controls were in parks on dirt trails.  The one time I did ride off road, it was sketchy as hell and very slow, so I didn't bother doing that again.  Road shoes also don't do too well on rocky hiking trails!  Oh well, next time.  This was a thoroughly entertaining way to spend an afternoon, and I'm glad I went!