Two weeks ago, we were racing in a full-on rainstorm for the Tuesday night race. It was warm, relatively speaking, but the rain soaked me through within minutes, and I quickly got chilled. As somebody who refuses to wax my skis for racing at Weston (ain't nobody got time for that!), I suffered a bit more than usual in the wet slush, but luckily had an old pair of slush skis that were running well, despite their lack of fluoros. I didn't really notice the rain during the race, and the baseball cap kept it mostly out of my face, but cooling down I started to get unpleasantly hypothermic, and had to call it a night.

So, let's just say that I was mildly excited to race last week on real snow! The temperatures had dropped again, so they were running all four guns, and there was a natural blizzard on top of that, and basically, you're looking at another soft slow race but without the rain, making things SO MUCH MORE enjoyable. The first hill was a true mess, they were blowing snow directly onto it, and there was all the new snow, and that hill was so deep that warming up, I didn't even know how I was supposed to get to the top. I decided that the fewest number of steps possible, screw good technique, was the answer to my problem, and that worked surprisingly well, even on a stiff pair of skis. At the very least, I was negotiating that hill (and the Mt. Weston bypass, which was also soft and loose) much better than the guys in my pack, but I am also lighter than them, which helps. 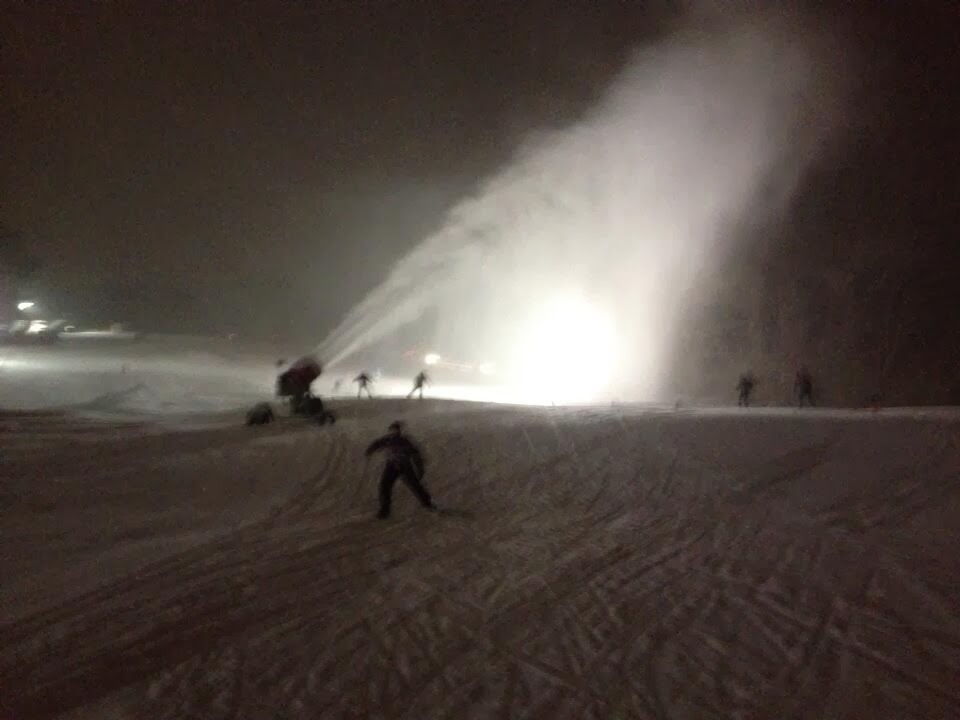 Because the snow coming out of the sky was messing with Boston's usually terrible traffic patterns, I got to Weston with about 6 minutes to spare before the race. Yay for racing without a warmup! I decided to start slow and ski into it, but we're talking a 14min race, so there isn't much time for skiing into anything. Luckily, I was able to move through my usual pack of guys easily enough, and the conditions were slow enough that pack skiing wasn't as helpful as it usually was, so I cruised along in no-man's land quite happily until I'd done my requisite number of laps. The natural blizzard edition of the Tuesday night races was by far my favorite so far! But I'm ready for some of the usual cold sugar-slush fests - that's what Tuesday night throwdowns are all about!
Posted by Alex at 1:47 PM