Last Monday, I decided sort of on a whim to do the Domnarski farm MTB race, the last root 66 race, because IBC decided to have a "team" race, meaning they paid for the entry fee. I got a ride with Thom and co, all carpooling has to start with scenes like this, right? 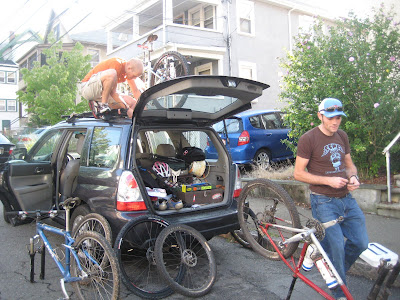 The course was a 10 mile loop, and pretty hilly. I quickly noticed that my middle chainring hasn't magically un-bent itself since great glen. The bike also didn't magically self-clean itself. Maybe if I'd ridden between that race and now I would have noticed these problems? I figured I'd go with my normal approach to mtb races which is to just ride my bike, and that worked pretty well. I was soon all alone, and just riding my bike, and having quite a bit of fun, actually. There was the minor issue of not being able to use my middle ring, which did not mean I spent more time than usual in my big ring... lots of granny geared riding!

After about half an hour of this fun riding, though, I started to get a little bored and lonely. The fun part was over, and now it was all atv trails with giant mud bogs in the middle. I started ticking off the miles based on a 10 min/mile pace assumption, and eventually I finished. It was a mostly L2 type of ride, but my back was really sore, enough that it was still bothering me in the car on the way home. 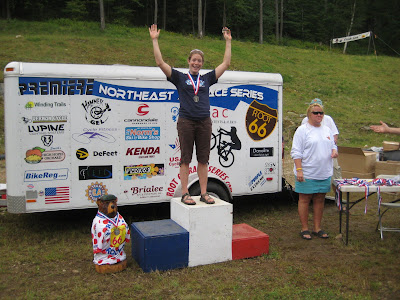 I'm not sure if I was racing against anybody or not... they may have just gone home early.

Sunday I headed up to Amesbury with about 200 cupcakes in tow. They let me set up my tent right next to registration, which was great, because everybody came by to get cupcakes, but it also meant I couldn't see any of the races. Hannah Sarnow was my helper-outer, which was key, because it meant that I could pre-ride the course and then race. And then lie on the ground for a while and then toodle around the field and call it a cooldown. 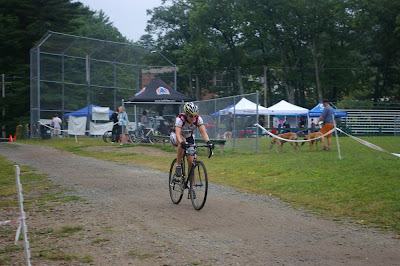 The race? The race started well. By the end of the first lap I was feeling pretty comfortable with my pace, chasing down an NEBC girl and being chased by Perri Mertens and Sue Mclean, somewhere around 7th. Sue and Perri came by on the downhill dirt road section, but Sue did something weird in the corner sending her tape-wards, and Perri just took a bad line, so I zipped by them and had put a nice gap by the end of the little loopety-loop section. I was generally pretty strong up the run-up and through the woods, and then Perri would slowly gain ground on the slow grass. Third lap, she almost caught me on the downhill dirt road again, but she didn't, and I was reeling in Sam from NEBC, and feeling like I had hit a pretty sustainable pace. Feeling good, if you can say that about a cross race. I made it through that lap, still holding the same distance from Sam, and Perri was gone as I started the next one. Whee!

Then I decided to take the far muddy wide corner on the inside, instead of the outside, and slipped, and overcorrected, and tumbled into the mud with a whump. Doh! I had time, though, thats the nice thing about having a gap. Got up and started running with the bike to remount someplace less muddy, and the rear wheel wouldn't turn. Chain was on, derailleur looked fine, wheel was in its dropouts... whats going on? The brakes are stuck on... argh no tools! Just moving the wheel back and forth and pushing on the brakes I loosen them up, but who knows what'll happen when I actually brake...

Perri, Sue, and Kat Carr have passed me in this interlude of head-scratching. I make it to the pavement, where I realize that my shifter feels funny... like its pushed closer to the bars or something. Doh! There is a wad of mud holding the brakes on! Problem more or less solved, I get up the run-up, dig out more mud, another girl passes me, suddenly the wind is out of my sails and the pain of cyclocross has caught up. I'm bouncing over roots instead of riding, zig zagging back and forth, Hannah goes by, cheers me on. I get through the lap, the slow mud before the barriers feels hellish, I see two to go, oh thank god. My back is reminding me how sore it was after yesterday's race, carrying my bike up the runup is causing some serious lower-back cramps. Going over the roots, it starts spasming, I keep slowing down, I think it has something to do with forgetting to pedal. The conversation is something like this.
Brain: Pedal the bike.
Body: Huh?
Brain: Pedal. The. Bike.
Body: Huh?
Brain: PEDAL. THE. BICYCLE.
Body: oh. How?

Meg passes me after the barriers as I'm zigzagging across the course, consumed by a smasming back, unable to give up... One to go, I just need to finish one more lap. I barely make it up the loopety-loops, but its five minutes left, I can do anything for five minutes, right? Finally finish and immediately find some place to lie down. Oh feels so good to have my back supported by the ground. Holy cow does cyclocross hurt, how did I forget?

More importantly, though--the bake sale was a success! I supplied many hungry people with delicious cupcakes in return for their money, and I'd call it one of those win-win situations! If you're interested in making your own cupcakes, the recipes can be found over here. Lemon chiffon cupcakes, car bomb cupcakes, and margarita cupcakes. Will I be at more cross races? Probably at least one. No guarantees, though. As much as I loved selling cupcakes, it took away from one of my favorite parts of cross racing--cheering on my friends and teammates. Plus, it was a lot of time invested, and I didn't sleep nearly enough all last week. This doesn't mean the end of the cupcakes, though! I'll be back =) 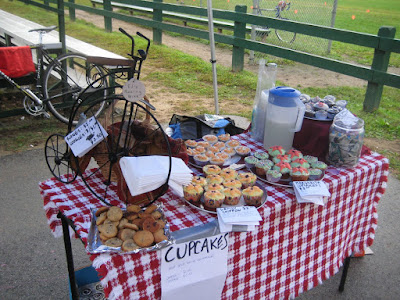