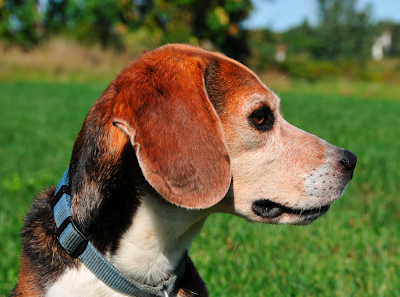 I don't know what we did to deserve him, but having Rudi in our family was one of the greatest things that ever happened to us. We were so lucky that the guy in the sky who provides people with beagles gave us Rudi. He was everything you could ask for in a dog.

To the end, he did his duty-- to sniff out the rabbits and to take care of his humans. It was hard, this cancer thing - I think I cried hardest when I found out that it was inoperable. What a brave little beagle.

It started with our first dog, Fred, who was a beagle from the shelter. Mama said, "no dogs", but we begged and pleaded and promised to walk and feed and train the dog, and then we found out that a family had just left an old, well-trained cocker spaniel in the shelter because they couldn't take him with them when they moved, so we went to go rescue him. We got there, and there was no cocker spaniel, but a little beagle called Arnold sat up and cocked his ears and chose us as his humans. The sign said he attacked other dogs, and stole food from the table, and ran away any chance he'd get... but we didn't care. We call him Fred, and he taught us about beagles. He taught us about sniffercizing. He taught us the concept of a pack. He taught us to not leave doors open, too. And we taught him various dog-things, like "sit". He never mastered "come". Then one day he tried to attack a moving school bus, and the bus won. I remember Christophe running down the driveway dragging Fred on his leash screaming, and I remember watching Fred as mama called the vet, and I knew he was going to die. I was inconsolable, that day.

Then we got Tira. We saw some colleagues of my dad's walking a baby beagle, and I think it was the next day that we went out and picked her up. Shes a playful, mischievous one, liable to run off if you let her, but emotionally very intelligent. Shes my dog. She was quite happy as the queen of the castle on her own, but, Christophe wanted a beagle of his own, and we saw an add for beagles in the paper, and drove out (with Tira) to go look at the puppies. There were two of them left, little handfuls of dog, squirming and pissing and crying and cute as anything. We picked the one that was wiggling more, and brought him back to Tira. She took one look at him and wanted nothing to do with him. Once she realized we were going to keep him, she was not happy about it. Rudi knew nothing about limits--Tira would growl at him and he'd walk up and nip her paws anyway. She'd bark at him and he'd walk into her cage. Eventually, tolerance ensued, and he was so cute we'd let him do anything, it was good he was doing what Tira would do since she is well behaved.

One of my favorite memories is from when Rudi was still a tiny little handful of a dog. Mama and I went hiking in the Adirondacks- we wanted to do Algonquin mountain. Tira was quite the hiker, but Rudi was too small to even get up stairs on his own, so we fashioned a sling out of a pillowcase, for him to ride in. All day, people would see Tira, out front, and exclaim, "oh, what a cute puppy!" but then they'd see Rudi, and he was just so adorable in his sling that they would just go absolutely gaga-googoo over him.

Oh Rudi. He never outgrew his puppy-cuteness, and he really was a champion snuggler. Nothing warms a bed like a beagle in the curve of your knees and another in the curve of your chest. I love coming home, whether it was after a couple months away in college or just at the end of the day, because there was always a welcoming committee, and sometimes Rudi would feel the need to show off, racing in circles around the house and sliding into walls as he'd try to turn on the floor. And of course he would get rudified, flipped on his back in your lap, which at first elicited a couple growls, but then as you scratch his belly he'd go limp and sometimes kick his foot, just utterly relaxed. 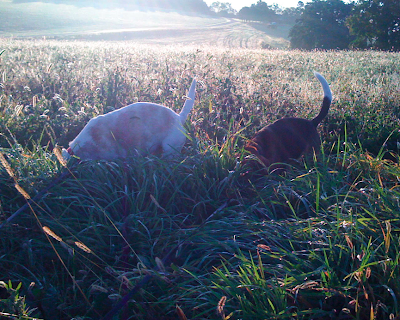 "Because it is our job description, that is why we sniff!

Last night, when the parental units called to tell me he was no more, I felt as I had after Fred attacked the schoolbus. But I no longer had to live knowing that Rudi would die soon--his time had come, and he did his job as well as he possibly could have. He created so much joy in our lives, that it is difficult to imagine life if Rudi had never been. But he was--and it was the greatest thing that could ever have happened to our family. Rest in peace, little Rudi, and know that you did a good job with your humans. Tira will take good care of them for you, because we all know how hopeless those humans are without a good dog in their lives. Rest in peace, and know that your short, wonderful life enriched the lives of your humans beyond words. We will never forget you. 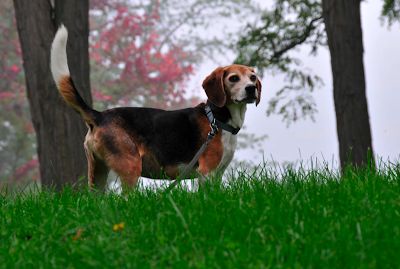 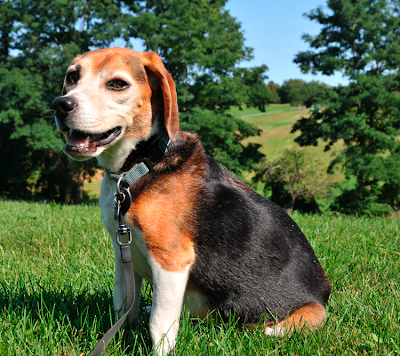 So sorry to hear. My condolences Alex.

So sad and terrible. I hope there are lots of excellent smells to track in Doggy Heaven. (Your post reminds me of how hard it was to put my favorite cat to sleep, seven years ago now, when he, too, had inoperable cancer. Worst day of my life.)

So sorry to hear. Man, that was a tough read.

Alex, that was a truly beautiful post. A fitting tribute for a fine, furry, friend.