This year, thanks to some interesting scheduling requirements, the ski orienteering championships were a week before the summer orienteering team trials.  Team trials are not necessarily the US champs, though they can be (like last year); they're a separate event used to select the team that will represent the U.S. at the World Championships this summer.  We send up to five men and up to five women each year, and this is separate from being named to the standing senior team, which is a slightly larger pool of athletes.  So, while I was named to the Senior Elite Team this winter, I still had to earn my stripes at the Team Trials, if I wanted to compete at WOC this summer.  Which I do. Quite badly.

So, knowing that I had to be ready to throw down in four races over three days in mid March, much of my ski season was sacrificed to running workouts.  If you live in the northeast, you'll know that this was not the winter to decide to be a runner.  While I had initially hesitated about signing up for CSU indoor track, it's a darn good thing I did, as that provided a not-snowy/icy/crappy surface to run fast on, and keep the speedylegs going about their business speedily.  Of course, the part where you run in the forest was a bit hampered by all the snow.  I tried, but knew my orienteering would feel a little rusty at full speed in hot weather.

I wasn't overly worried about making the WOC team itself, because you get to use your best three scores out of five, and one of those five scores is your US ranking, which reflects how you've done at A meets through the last year, and my ranking was strong.  So, I just needed two solid races and I'd likely be in the top five.  However, the rules about how many athletes get to start each race at WOC have changed this year, and with the more limited start spots, I knew I needed to prove to the selection committee that I was indeed faster than everyone else if I wanted to get a chance to run the races I wanted at WOC.  So, time to do some proving!

The races were being held in the east bay area of California, middle distance at Black Diamond Mines, long distance at Mount Diablo, and the sprints at Mill College.  It was 73 degrees warmer on the start line of the middle distance that Friday afternoon than it had been five days before for me at the start line of the long distance ski-o champs race.  Nothing a human body can't adapt to, right?  I tried to do a minimal warmup, repeatedly dousing my head and torso with water and staying in the shade as much as possible, but I still suffered out there.

Middle distance map.  Quite technical, despite just looking like it was a bland hillside.  Very hilly, and because the race start was at 2pm, we were in full sunlight. Click the map for larger image or to turn on/off route.

My major goal for the weekend was survival, since I hadn't done any races yet, and I didn't feel that my legs were hardened enough with fast running, so I wanted to take it easy on the downhills.  Naturally, this means that out of the start, I hammered down that trail to #1 hard enough to leave me hobbling the rest of the weekend.  I was doing quite well with the navigation through #6, confident and smooth and keeping the effort more or less under wraps, but I lost contact somewhere on that hillside to 6 and had to relocate 100m away, costing me over three minutes.  After that, I was more hesitant, worried about making another mistake and knowing that I didn't have that much room for error.  Unfortunately, I didn't grab water on my way to 13 (when I should have), thinking I was nearly done, and the dehydration-related mistakes began to pile up at each control near the end as my brain got fuzzier and fuzzier.  Eventually I finished, a bit disheartened to have run so poorly at the end, but luckily everyone else aside from Ali ran worse, and I ended up in second for the day. Looking at the splits, I was actually winning the race at #5, so clearly I do know how to run smoothly and with confidence, I just need to do it for the whole race! Official results. 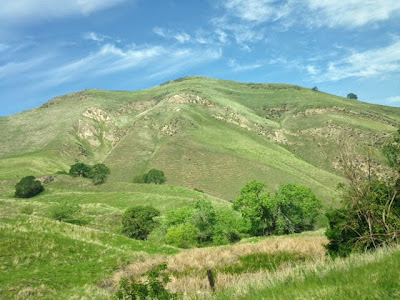 In Jospe terms, hills like these are known as green rich guys. Sort of a long story involving a misunderstanding about going gallumphing down a green ridge.  This was the middle distance terrain, and it was sure hilly! 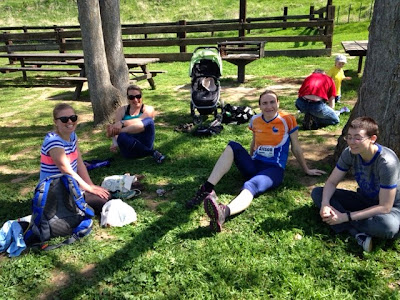 Experiencing warmth and sunshine for the first time all winter... Great for lounging, but too hot for running!

Saturday was the long distance race, and because we were starting in the morning rather than the afternoon, I had hopes that I would survive the California sunshine and hopefully hammer out a solid result.  Given how I had trashed my quads descending to #1 yesterday, so much so that upon waking up I physically couldn't get out of bed until I'd massaged my legs for five minutes, I was prepared for a painful race.  Luckily, after a warmup everything was functioning as usual, so my goal for the day was to run hard where the opportunity presented itself, taking advantage of trails, and taking the time to make sure I chose the right route on the long legs.  I executed this plan nearly to perfection, picking what I think were totally the right routes, and running with my head up and full confidence. I think I may have paced myself too well, but I was more interested in a clean race than one where I collapsed at the finish line.

The splits are less exciting than the day before, just showing a steady consistency, but today I got beat by two men, rather than just one. It was good enough for second among the ladies (results), again behind Ali, with a three minute cushion over the next runner.  Right where I wanted to be! 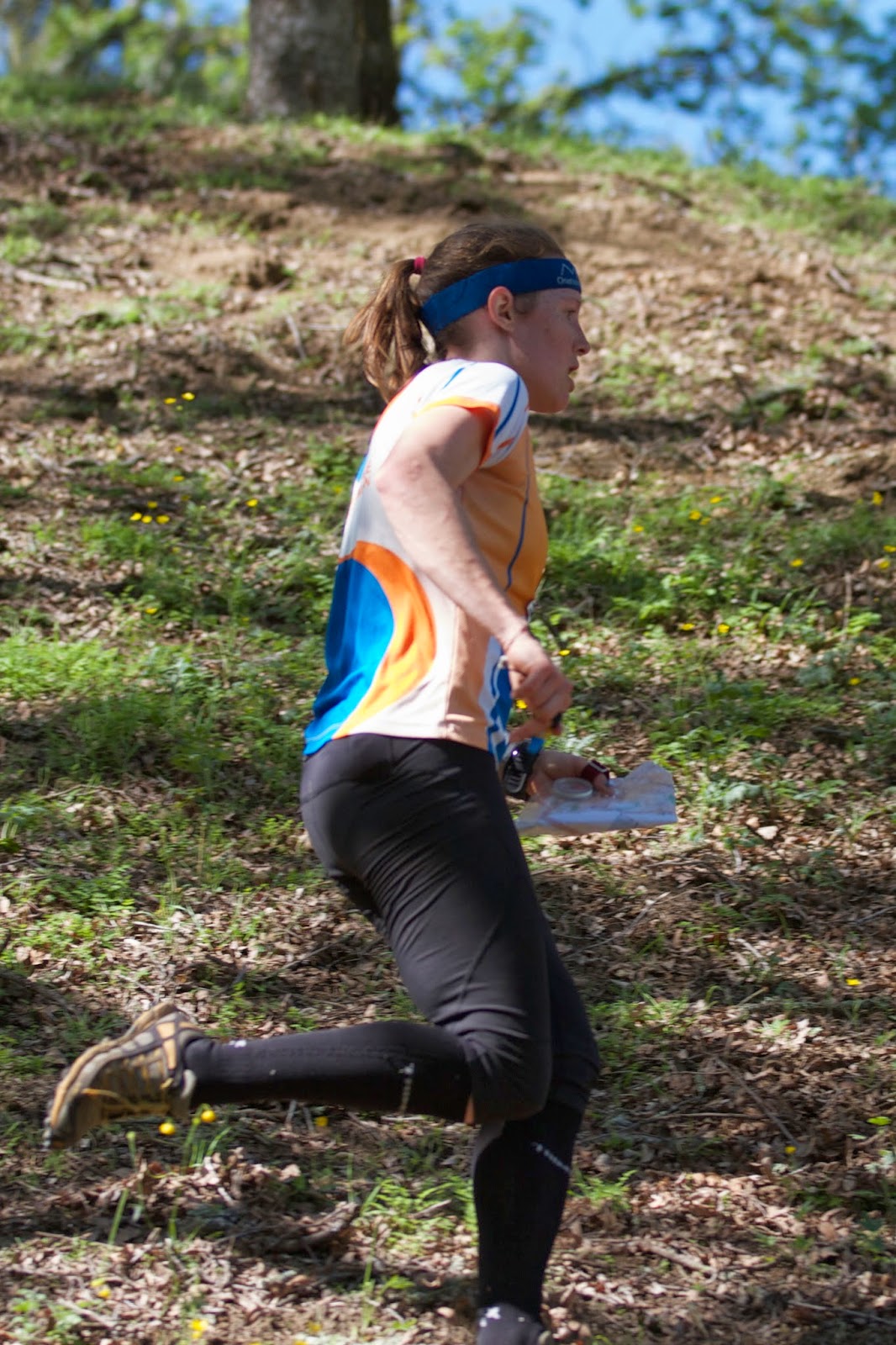 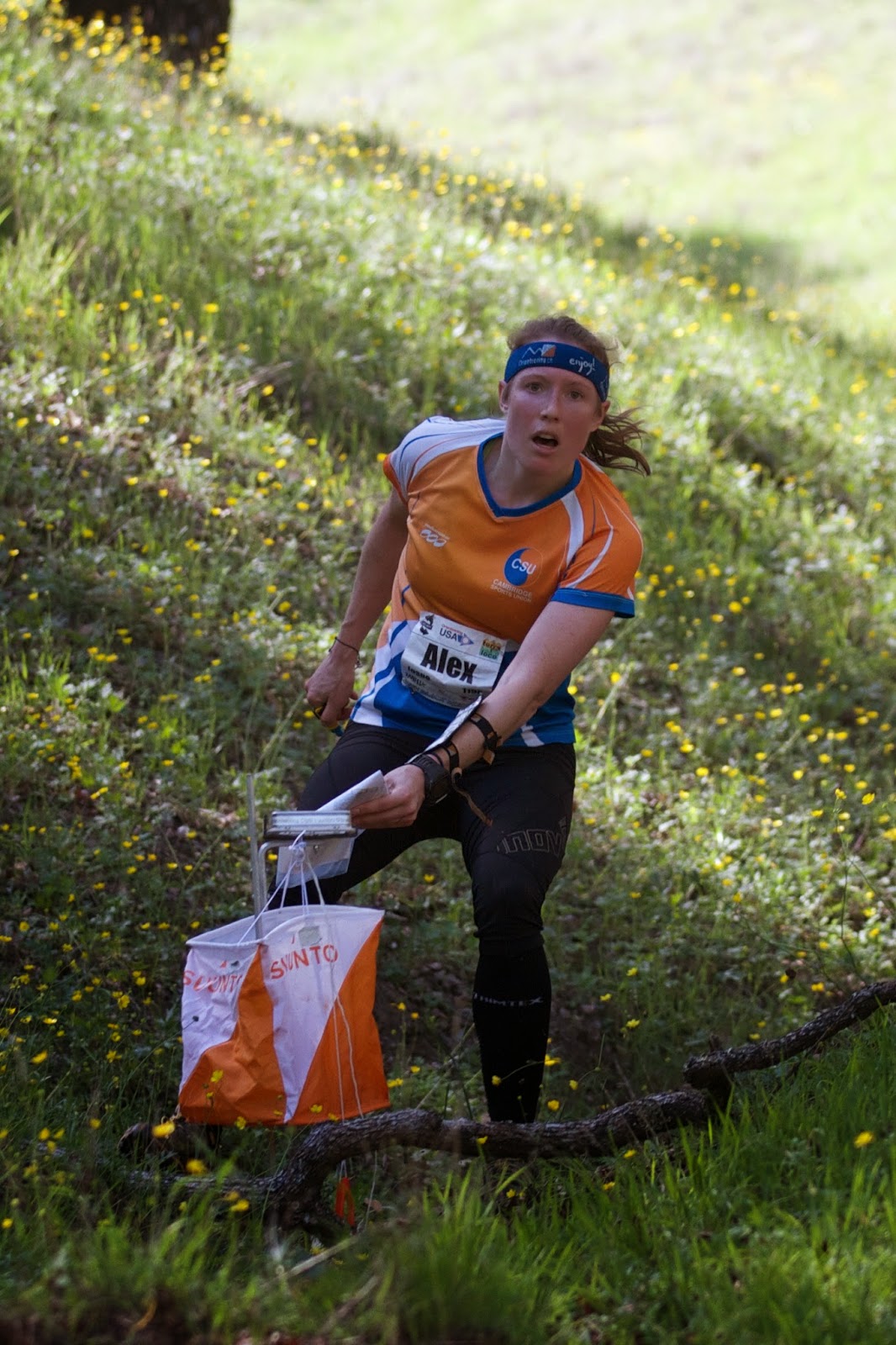 Thanks to Dave Yee for these photos.  Not sure what is so surprising, but you can SEE the focus =) 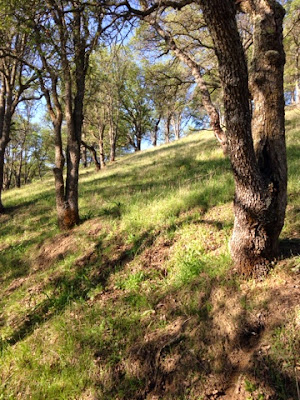 Awesome oak trees. This counts as "forest" in this part of CA. So runnable! But steep, in case the photo doesn't make that obvious. 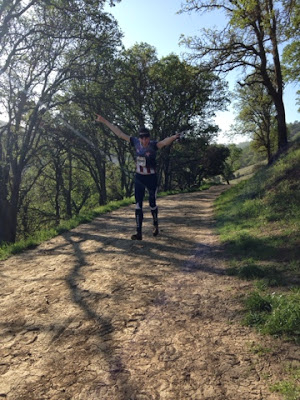 A pouncing Ali on her way to the start!

The final day of racing consisted of two sprints: a "regular" sprint on the Mill College campus in the morning, and then a one-person sprint relay in the afternoon, consisting of four maps on one page.  When I woke up Sunday morning, the delayed onset muscle soreness was even worse than on Saturday.  Given that my combined score (ranking, middle, and long) was good enough to make the team, I considered not starting.  How much more damage would I be doing to my quads if I threw another two hard and fast races at them?  But a shakeout jog/stumble and a few cups of coffee later I decided that since I was mobile and upright, it was time to do this. 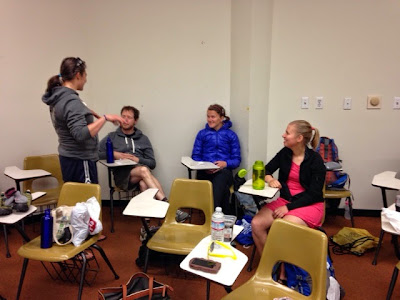 The sprint was at Mills College, and the staging area was in a classroom.

My plan for the sprint race was to stay in contact in the map, and execute a perfectly clean run where I was in total control.  I did this, but almost too much - I didn't really get moving until control 8, clawing back 45 seconds to Tori between the 8th and 20th control.  I still think starting smoothly and carefully, always knowing my exit plan and what was happening next, was a good strategy, but it's time to figure out how to make that happen a little faster.  I suspect a large part of the slow start was due to the painful legs, so I may have needed a harder and longer warmup.  Anyway, the sprint wasn't 100% clean, because on the penultimate control, I couldn't find the flag... it was right there, but near the ground, and I just couldn't see it, and lost what felt like forever but really was just 10 seconds looking for it.  (splits).  The result was good enough for third, behind Ali and Tori, and I wasn't too happy to be that far behind Ali (official results). Ok, legs, we're doing this again in two hours, can you please move a little faster? 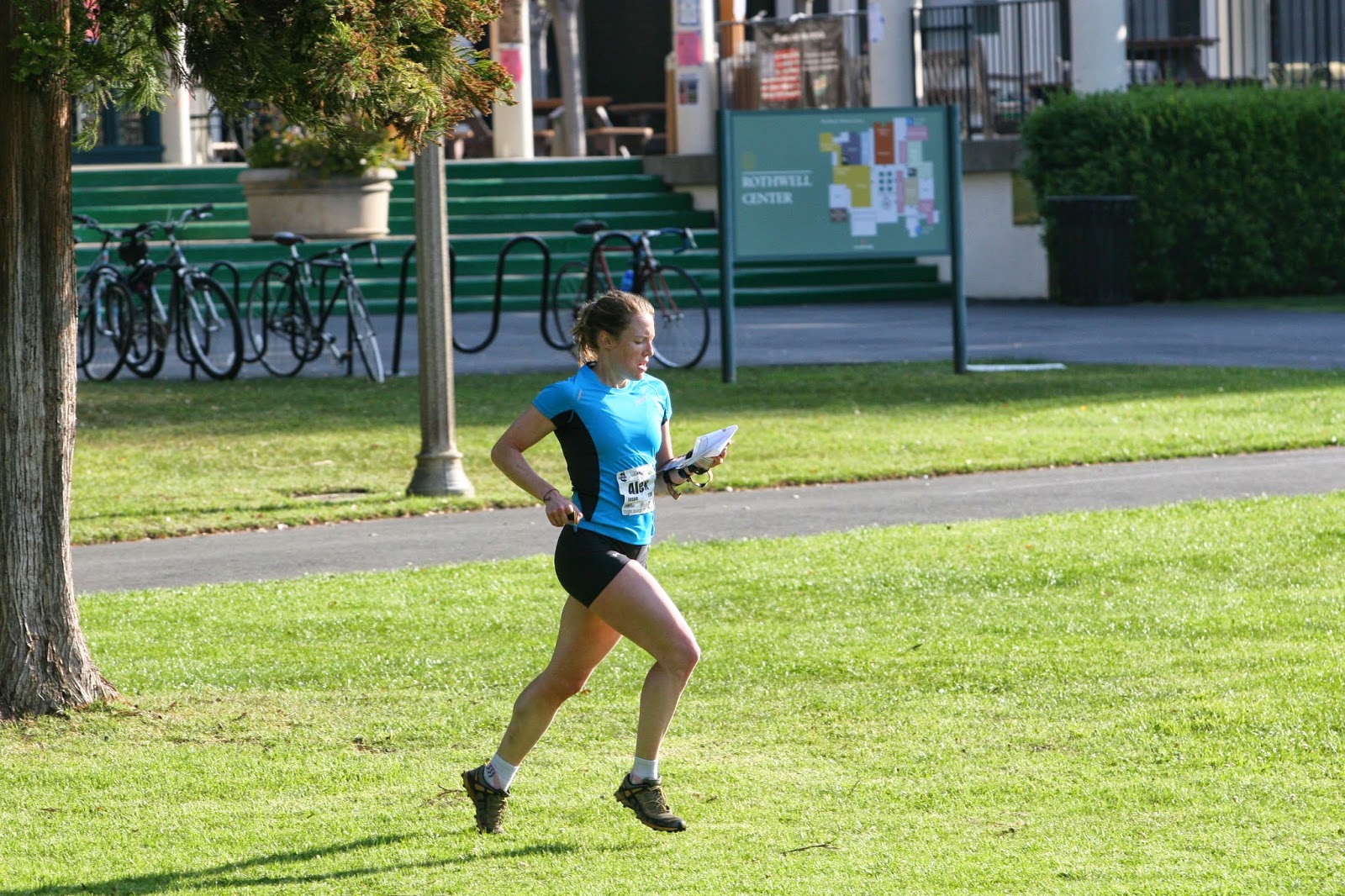 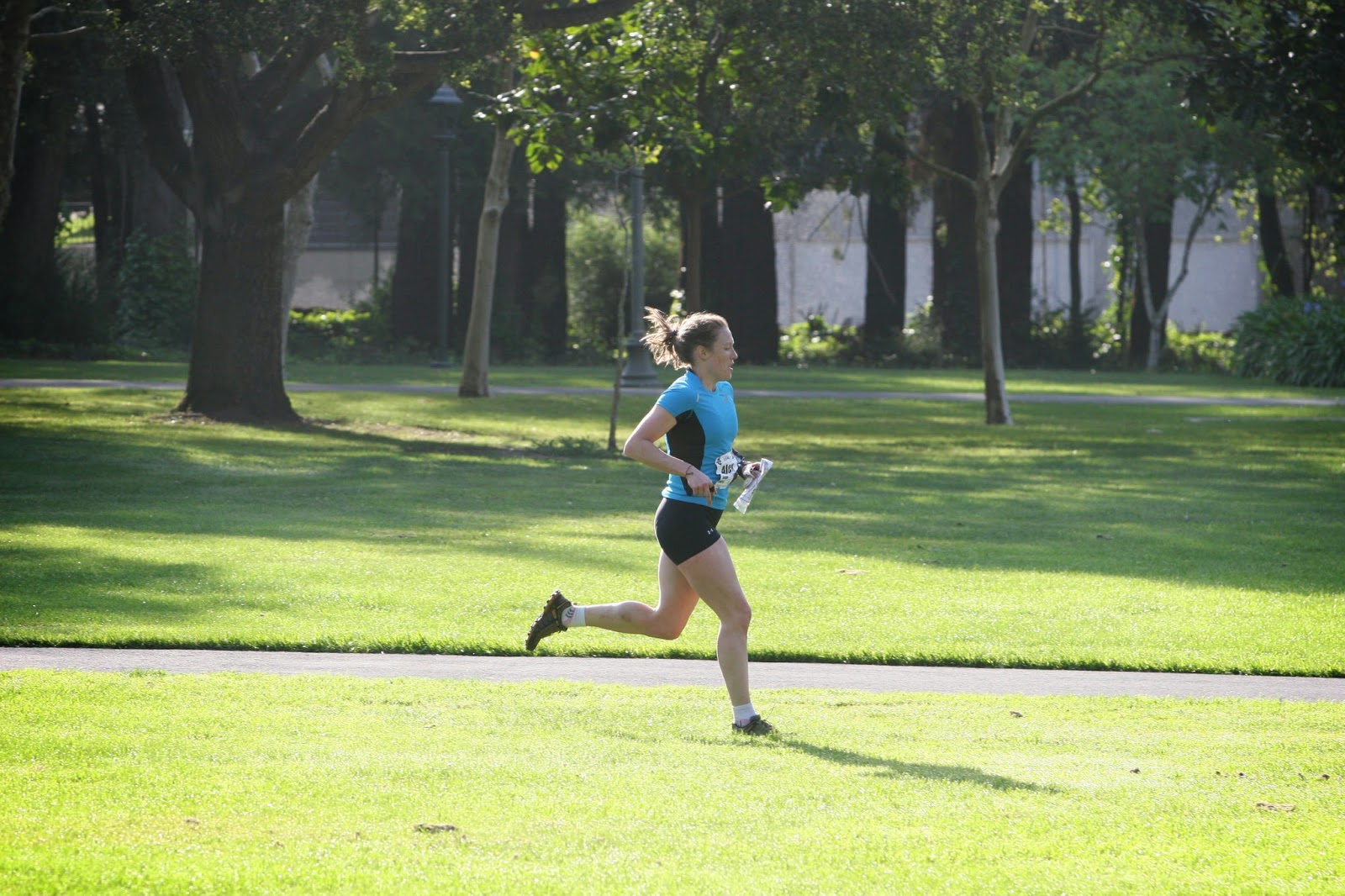 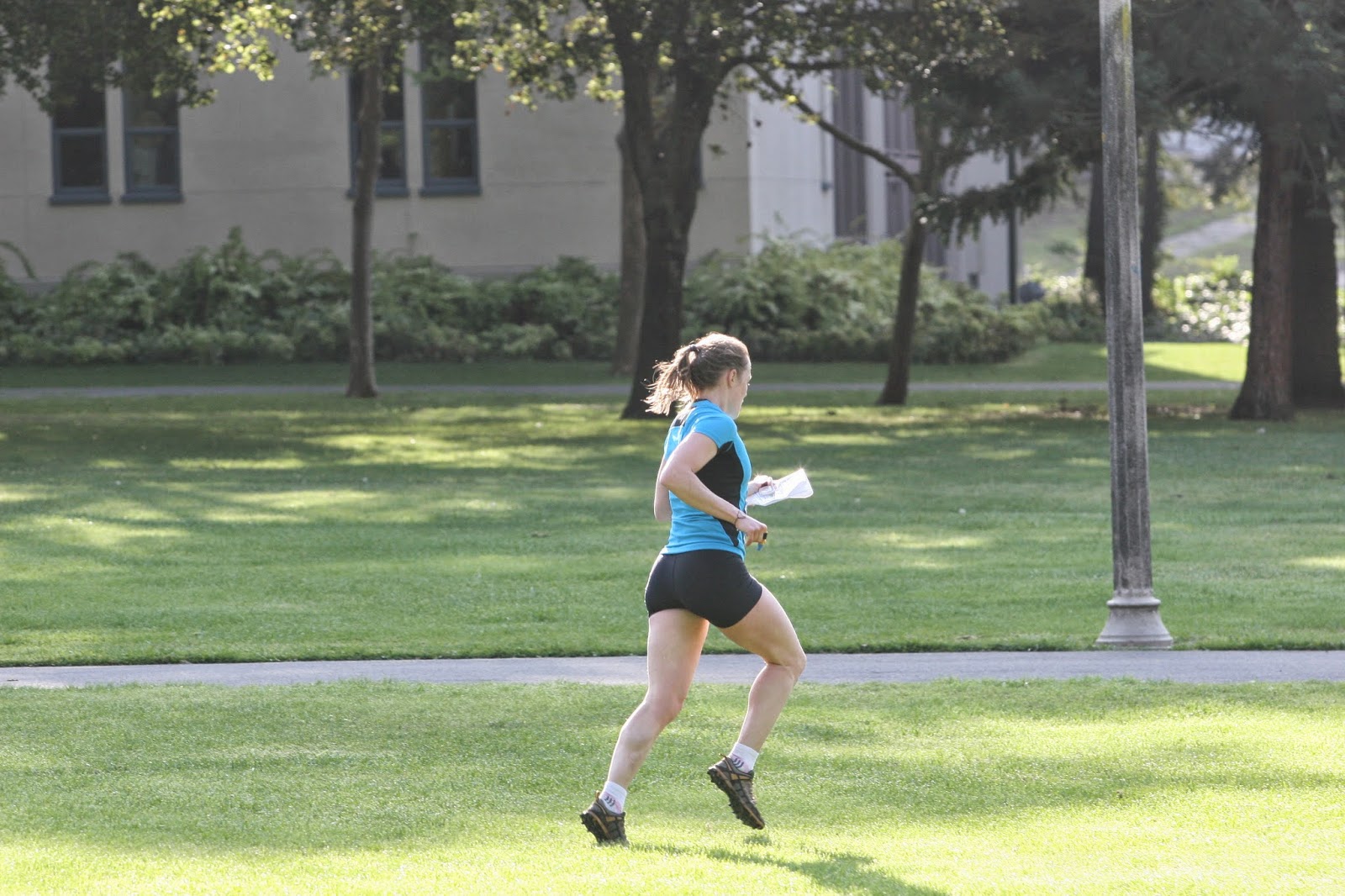 Two hours went by incredibly quickly, and then it was time to warm up again for the sprint relay.  The legs were in a lot of pain, still, but I made sure to do a hard enough warmup that I'd be capable to running.  The event was a one-person relay, with all four maps on a single piece of paper.  Each person had to run each map, in a designated order, so that everyone runs the same distance in the end, but not all together as a pack.  It was super fun!  I thought it might be confusing but it was pretty easy to follow along that you start at map #1 and finish with map #4.  My first map, I mistook a wall for a hedge, and went to the wrong place, losing 15 seconds, but it gave me a chance to see all the people who had my same first map.  Ali was on that map, and I caught up to her and ran with her, which was a bad idea, because when I came through the first loop only 10s behind her, she was warming up and I was swimming in lactic acid.  No matter! There are three more loops to play on! 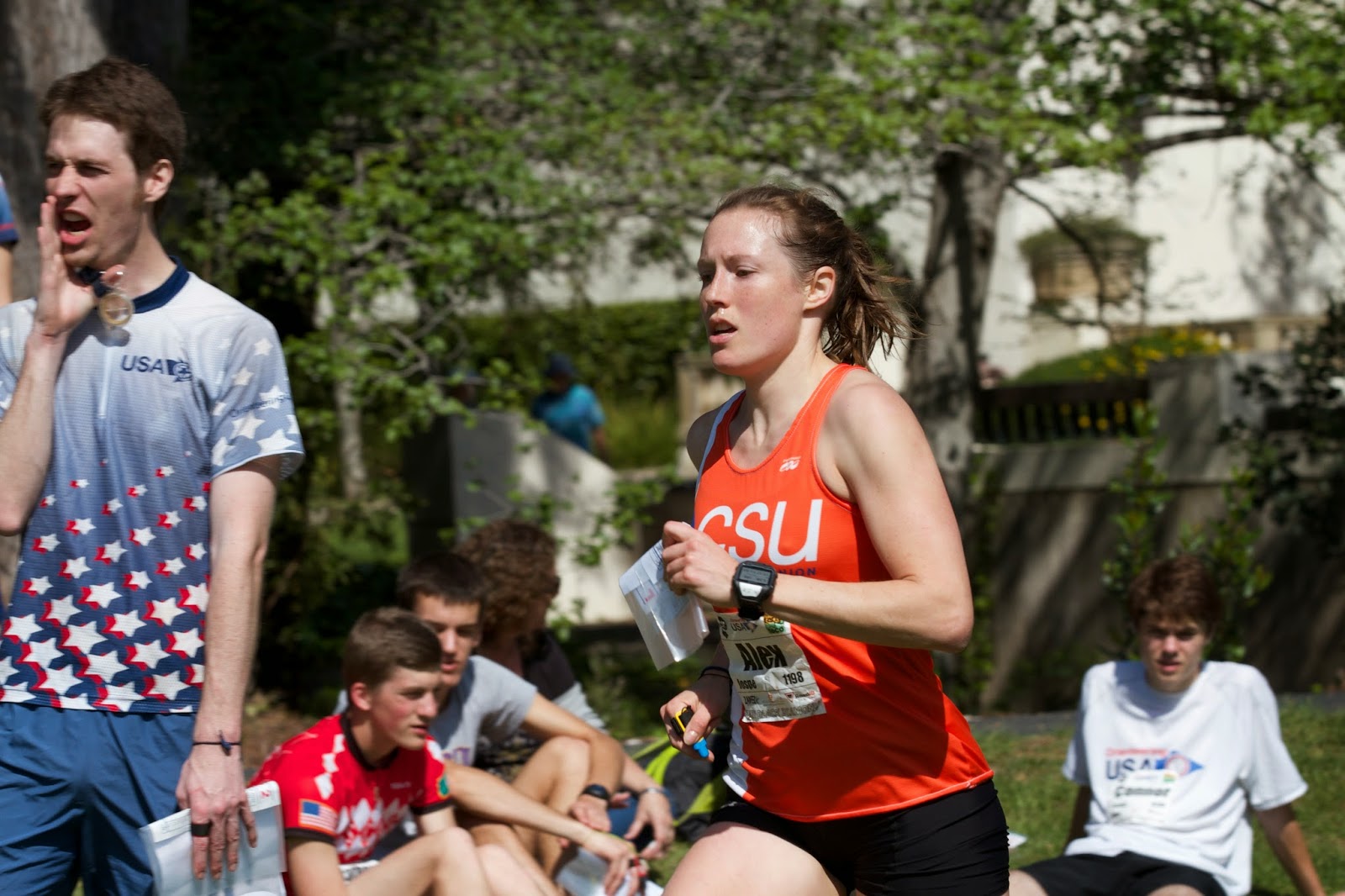 Into the second loop, and I had to slow down a bit, but I kept trying to push the pace, knowing that my competitors were close.  I was finding that uphills were pretty difficult, and downhills hurt my quads real bad, but the flats were ok, and I tried to keep moving while still reading ahead and knowing my exit and my routes.  This was a good plan, and I ended up in second place, pretty far behind Ali but well ahead of Tori (official results). 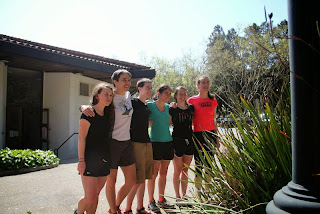 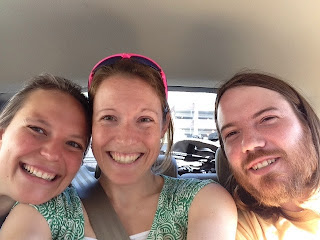 Happy passengers in Carol's car, heading to a weekend of orienteering!  Ed was in charge of all the results, and he did a stellar job, as usual. 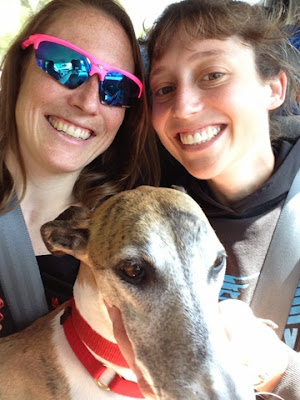 I missed Presto.  He's apparently enjoying this move to a warmer climate; has to wear many fewer jackets. I suppose I miss his people, too. 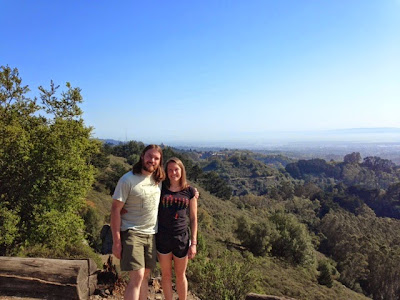 Ed and I stopped by Berkley to visit with sgb and Lori and Presto on our way back to San Francisco from the meet.  sgb took us up some hills to see the view, which was pretty spectacular.
Posted by Alex at 2:12 PM