Have you ever had a shoe come untied mid-run, even after double knotting it? And then after running through mud and ice and snow and more mud, your laces are frozen into a massive glob of uselessness and you can't get them untied but you're freezing and just want to come inside but you can't because you've got these frozen muddy things tied to your frozen stumps of feet covered in mud... Yeah, me neither, I never do runs like that :). Or even worse, your shoe comes untied mid-race, and there's no worse reason to stop running in a race than an untied shoe.

So, I do this sport called orienteering, you may have heard of it if you've come by here before. Our terrain puts trail running to shame, but it also really tries to untie your shoes. So, our knots gotta be effin' BOMBPROOF. Enter the daisy chain. I'm gonna walk you through it: 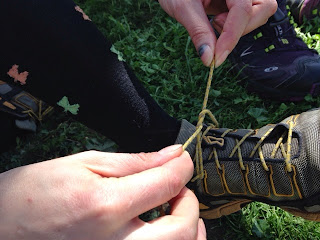 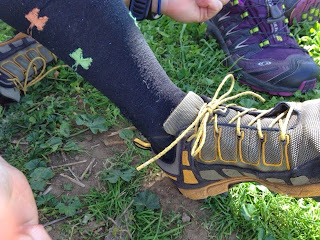 Step 1: Put your shoe on your foot, lace in your favorite lacing method (I'll cover those, later), and tie a regular bunny ears or whatever it's called.  Sorry about Ali's big purple salomon shoe in the background, I didn't think about that when I asked Carol to start taking photos... Also, my black thumbnail looks pretty gross. Ugh. 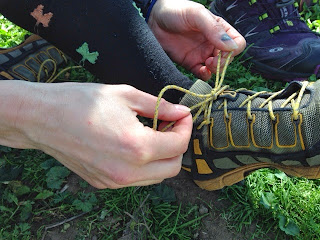 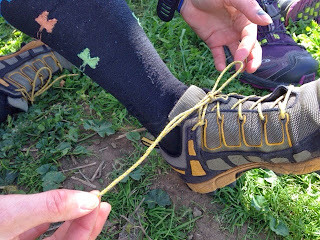 Step 2: Pull one of the loops all the way through, so that you're left with one loop, and two ends, one of which is really long.  (sort of like how you'd tie a bathrobe, if that's any help). 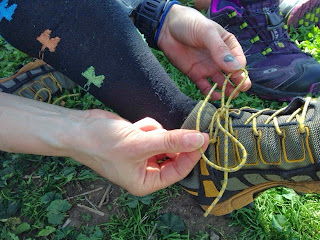 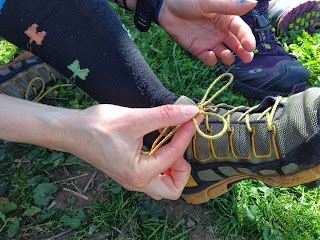 Step 3: Take the long end, that you had just pulled out in the previous step, and create a loop (as seen in my right hand). 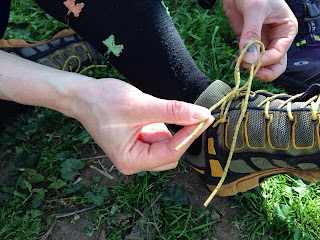 Step 4: Bring that new loop through the existing loop (left hand is holding the new loop, which has been brought through the old loop). 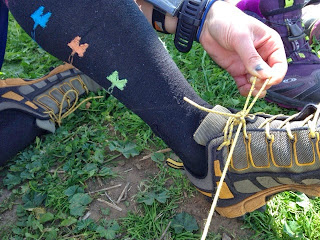 Step 5: Close the old loop by pulling on the short end of the lace ends.  This will now become the long end. 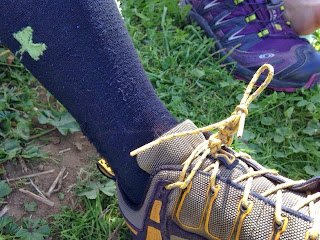 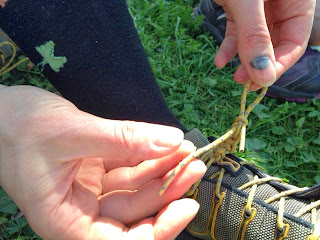 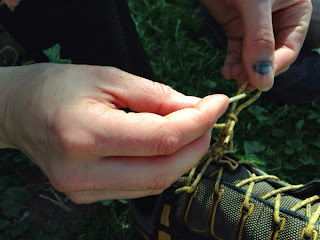 Step 7: Finish the knot by taking the long end, and poking it through the loop (do not make a loop, just put the end through the loop), and pulling the short end to close the loop. 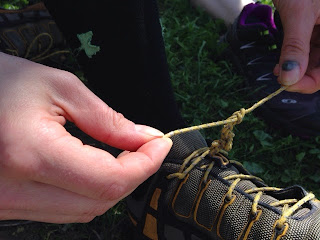 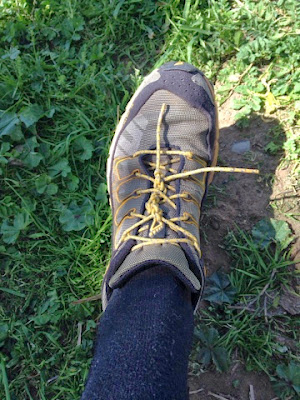 Step 8: Tuck the daisy chain under one of the other laces to hold it down. This isn't a crucial step, just keeps it out of the way and not slapping against your ankle.

To undo it? The only hard part is that you have to undo step 7, pulling the end back through the loop.  Then you hold one end in each hand, and yank alternately until it all pops out.  Simple! Easy! Indestructable! No more untied shoes =)

It was really insightful.
Thanks for the info.
Wanna have more contents from you.
Cheers
BTW if anyone interested more have a look Read More thanks

It was really insightful.
Thanks for such a nice content.
Cheers
BTW if anyone interested more have a look theshoesfinder.com thanks

Thank you so much,
Now I have something to read during the holidays. This will take a while but well worth it like always
You can read another one here the shoesfinder