I had to do a long OD saturday, a ski-run combo workout, and I figured I'd do the running part at an orienteering meet, to keep things interesting (and possibly walk more of the uphills, since nobody can see me in the woods... wait did I say that?). UNO was having a meet in Hollis, NH, so I planned out a rollerski loop near there and headed north in the rain.

The rain abated slightly for the ski, but unfortunately one of the roads on my loop didn't exist, and happened to be the only way over that ridge without adding an extra 5-6 miles, so I had to turn my loop ski into an out-and-back. Aside from that, it was a beautiful day to be skiing. By the time I got to orienteering, though, the rain had started up again with a vengeance. Thank god for map cases... I decided to run the blue course, since I needed another two hours of L1, and blue is the longest course offered. It was a bit much for my brain, though, and I started having concentration issues near the end. Here is the map (straight-line distance 9.2 km). 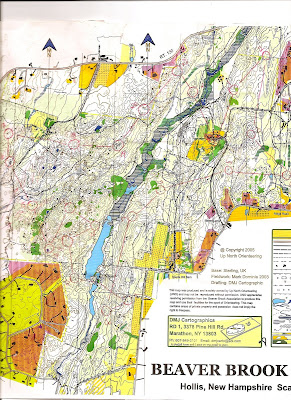 The first six controls were pretty straightforward, and although I sure wasn't moving too quickly, things were ticking along. The way I approached control 7, there weren't any catching features or real attackpoints to work from, and it could have been ugly if my compass bearing had been off, since the area was covered in small white pines, which allowed for running through the woods but really limited visibility. To, say, three feet or so. So you had to be really on top of your direction on the longer legs. To get to 8, I headed downhill and followed the trail along the river, until the trail made a sharp bend and the hill came right down to the trail. 9 was a water stop, which was greatly appreciated, despite the fact that I was licking the rain off my upper lip every three seconds or so...

The next tricky set of controls were 11-14, which all required some amount of concentration and connection to the map, since there were no obvious trails or other handrails leading to the controls, but my mad skillz prevailed and I had no issues, although I went really slow from 13-14. There was fresh logging near 15, so I went around on the trail to get to it, although I should have gone on the trail to the right of it rather than the left. 16 was clean, but 17 was my first real mistake, I ended up on the cliff to the right of the trail thinking I was on the cliff to the left, and spent some time scratching my head wondering where I was. Dummy.

By this point I was out of food and into my fourth hour of an OD, and my brain was starting to fail me. I made it to 18 without a problem, but overshot 19 a bit, again it was in those dense white pines and visibility was super limited. Then I made another mistake, coming out of the woods at the trail junction to the NE of 19, thinking I was at the junction to the NW, and not checking my compass before I bolted down the trail. By the time I'd realized my mistake it was another 8 minutes lost. Luckily, the last three controls gave me no problems, and I limped on back thoroughly exhausted and absolutely starving. Blue courses are long. But a fun way to waste a couple of hours!
Posted by Alex at 5:55 PM