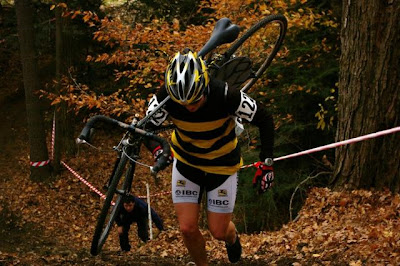 (All cross shots from zoo, thanks!)

People liked the bee costume as I was running around cheering on the men. People REALLY liked the bee costume as I wore it racing... I got many jokes about not being allowed to wear aero equipment, using my wings on the uphills, buzzing, and sting comments. Although I wasn't wearing a stinger. Anyway, thanks for all the cheering folks, it made the race a lot more fun! 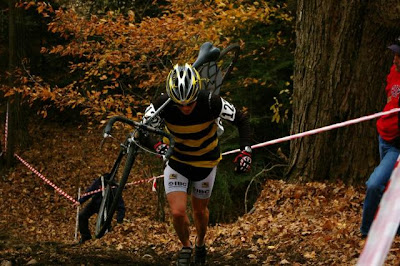 I should race in costume more often, it makes it absolutely impossible to take yourself too seriously, which, when you're way off the back, is a good thing. I actually got called up to the third row, I don't know how that happened, but there were people behind me! I felt special, and I felt really bad for the girls behind the bee. Off we go, its clustery through the hole shot and over the tracks and I realize that this whole "don't start so hard, dummy!" tack is working, and I'm relaxed and it feels good. End up sort of riding with Callie, yo-yo-ing more than anything else, for a lap or two or three. I think I might have made it three laps. I was still entertaining the notion of catching the girl in blue and the girl in green and maybe even the girl in red. And then I got slow. I don't really know what part was slow, I think I just overall slowed down, on every part of the course, and Kat Carr, who had been miles behind me, caught up to me, and Callie was way out of sight, and well, it was hurting a lot.

So I rode with Kat for the last three laps, and she was doing the same thing I was - going really slow on flat straight parts. She had no problem closing gaps, though, any time I tried to open one. I had a real dilemma at the ride-up/run-up thing, because it was faster to ride it, even if I would be almost at a stop at the top, but then my legs were too tired to do anything other than shift gears and go at two mph until I turned the corner for the barriers. Running it was slower and the fans didn't like that, but my legs would feel much better when I got back on the bike. Last lap I decided to ride it, since I was hoping Kat would bobble, and maybe she did, but she closed the gap again. So we tootled along the pavement to the corner and turned the corner and started sprinting and yes, I was on her wheel, all set up to blast around her, when the race brain said, "hey, you should be in your big ring. You have a big ring, after all, you should use it". And the other half of the brain, the part that controls what my body does, agreed with that logic, and mid-sprint, I tried to put it in my big ring. F&*%ing rookie.

But that course is so much fun to ride that it was ok that I just lost a sprint out of sheer stupidity. Gloucester should take some notes. And, I wish I could remember all the bee-related things people were yelling at me during the race. My favorite moment was running through the sand, when somebody yelled "fly! fly bee!", so I started flapping my hands, much to the delight of the little six-year-old girl watching the race, and then I caught my derailleur in Callie's front wheel... luckily, we untangled that mess before setting down the bikes. 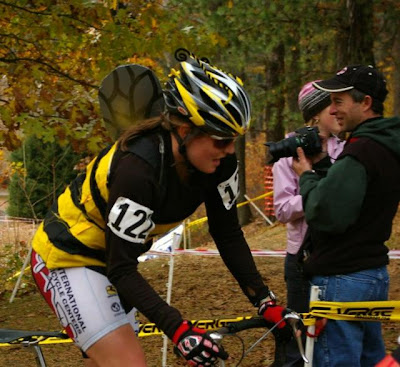 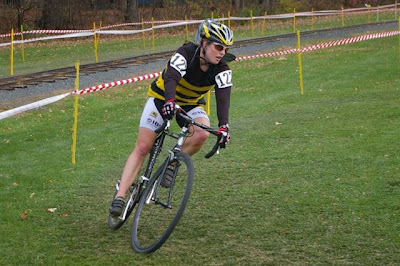 Sunday I figured I'd had enough biking for a while, so I headed north to Andover for the 20th edition of the CSU rollerski race. It was a 15k classic, mostly flat, and mostly attended by CSU and Harvard ski team. Sounds like they have a real team this year, should be exciting. The course starts with an uphill, then rolls downhill for a while, then after you make the turn it rolls uphill, then you make the next turn and its a gradual hill on really bumpy pavement, then a downhill, then ~200m of flat into the finish.

We all started together, 20-30 rollerskiers, and going into the first hill I was already at the front of a second group, with a first group of some of the faster guys, juniors (who were only doing 7k), and Hillary Rich, who I assumed would be doing 7k since she was skiing fast. I figured I would probably get dropped by those guys if I tried to ski with them, and with this wind I'd rather have people to draft, so I stuck with group two up the hill. I also was not quite as warmed up as I meant to be, since I spent half of my warmup in the car with the heat on...

About halfway through the downhill rollers, I'm in a little group of John Rich and Chris Burnham, a master and a junior, and John is leading us with a mean double pole. Going up one of the hills my kick double pole is proving faster than his striding, so I figure I'll lead for a while, when I hear a *snap*, and my little metal extender doohickey on my left ski flops to the side. The extender doohickeys are on my skis because they're combi Marwes instead of classic Marwes, and the combi skis are shorter, so to properly kick you need the extender doohickey. I tried to keep my curses under my breath, because I didn't want Chris to hear his coach swearing, but I was worried I would have to double pole and kick double pole on my right foot only for the next 10km. Luckily, after kick-double-poling on my right foot only up a hill, I realized that I could still use the left ski, I mean, the ratchet wasn't broken, it was just too short with a metal piece with a wheel sticking out diagonally towards the right. So I could kick, I just had to be very careful about bringing my foot back through, so that I didn't catch the metal doohickey on my other ski.

Once I figured out that I could still ski, I caught back up to John and Chris, and we started to reel in Jimmy Burnham and Tommy Rummel. Came through the start/finish area, and Chris pulled off, having finished his 7km race. John and I started up the hill, and because I couldn't kick comfortably, I had to slow down my tempo, and John got a fairly big gap. Its a long hill. At the top I looked back and saw someone coming up the hill, but I couldn't tell if it was a guy or a girl. I tried to hammer the flats/rollers to catch up to John, but he had a good 30s gap on me. He caught up to Jimmy, and on the downhill before the gradual uphill on bumpy pavement I could hear my pursuer catching up on faster skis. I worked pretty hard up the gradual hill, but then it went downhill again before the finish and my pursuer caught me. It was Audrey Mangan from Harvard, on proskis, and I had to drop into the lowest tuck known to man in her draft to keep the gap from opening too much. By the bottom of the hill she had maybe 6-10 feet on me, and I barely caught back up to her by the finish, but she still beat me.

Annoying to have lost two sprints in one weekend, but, at least the rollerski race it wasn't because of my own stupidity. 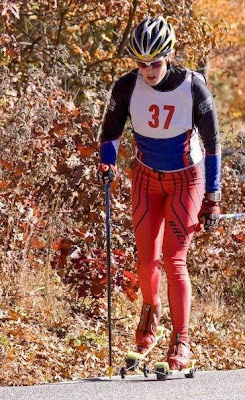 Good job at the races this weekend.

How do you stop with those roller skis if you're on a hill or something? Is it like roller blades where this kind of a brake in the back?

Brakes? What are these brakes you speak of? Definitely easiest to just accept that you can't slow down and adjust your actions accordingly.

Slowing methods, in order of preference:
1. "Snowplow", wearing through the rubber wheels to create friction against the road.
2. U-turn to face back uphill
3. Grab the pole of someone with slower skis.
4. Aim for grass or gravel and run when the wheels stop rolling.
5. Fall, preferably on grass or dirt. Don't break your poles.
6. Slam into immobile objects.
7. Run or walk down any hills too large to safely descend.
8. Buy V2 skis and deal with a shitty ski design in order to have a "speed reducer", a piece that pushes against the tire, creating friction that slows the ski.

What did I miss?

The arms-out thing doesn't really work, though. I mean, it sort of slows you, but not enough to go from "unsafe speed" to "safe speed"...

Tree branches are far preferable to stationary objects, as they move with you. Unfortunately, we're a little low on overhanging branches in this part of town...