Yesterday, the New England Orienteering Club (NEOC) hosted the 36th annual Blue Hills Traverse, a race that basically traverses the Blue Hills, south of Boston. It was a fun race, billed as a follow-able long run, at 13.5km straight-line distance. I ended up running around 15km, so clearly I didn't take the most direct routes, but I thought they worked pretty well. I've posted the naked maps below, and maps with my route are further down the page. The Blue Hills are large enough that the map was two-sided, broken into east and west sections of map. The start is at the triangle, and the finish is the double circle. 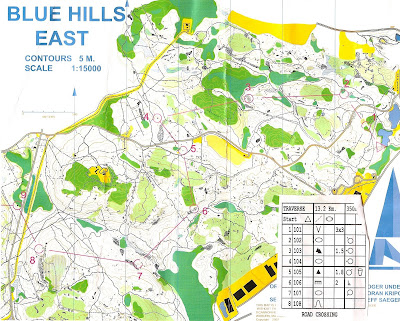 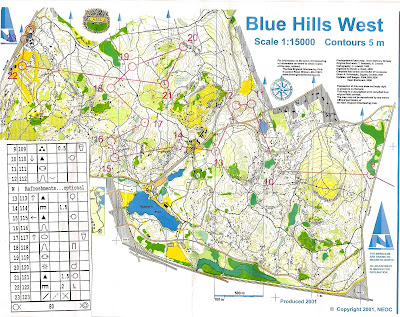 I had every intention of treating this run as a nice easy OD, and I started off nice and slow to keep it in zone 1. Packs were starting to break up by control 3, and then I lost the pack I was running with as I went a different way to 4. At this point I noticed that I was ahead of a pack I'd been chasing, and wanted to get to 5 before they did, and when I got to 5 there was nobody in sight, my competitive fires had been stoked. Goodbye easy OD...

I started running for real when I was on trails, and took the "safe" approach of hitting trails as much as possible, for faster running and easier navigation. From 6 to 9, I was loosely in contact with an "old but accurate" group of guys who also were moving pretty swiftly, a little too fast for me through the woods, so I let them go. I headed north towards the road to get to 10, and got to 10 just behind the old but accurate group, and tried to catch up to 11. I didn't see them again until I was leaving 14, at which point I was starting to feel pretty good. I ran along the road to 15 and I was racing at this point, all systems were go.

I hiked the hill to 15 to make it easier to drink more gatorade, I think carrying sugar-water and gels was a key part of my ultimate strategy of beating the old but accurate group, because they were just drinking water at the water controls and I was actually fueling. Go me. By 17 I could see the slower half of the old but accurates, and I used superior navigation (instead of faster running, my usual strategy) to get to 18 first. Leaving 19, I saw two young 'uns, and I knew I was having a good one. I caught the front of the old but accurates (there were only about 6 in that group, and they were pretty spread out) running along the trail to 20, and then JJ, a very good old but accurate orienteer, headed up the hill into the woods sooner than I would have gone. I decided that since following was allowed, I'd follow him.

This ended up being my only mistake. JJ had gone into the woods too early, I'd blindly followed, and now I was having a helluva time relocating in the light green with low visibility. Eventually I got to the control, at the same time as JJ and another young'un who had followed him, but the old but accurates were gone. I made up some time on the trail to 21, and decided on the northerly, flatter, slightly longer but easier to navigate through route to 22, where I passed two more of the old but accurates. The other young'un followed JJ, and finished about a minute ahead of both of us. I ran into JJ again at 22, beat him to the punch but he was well ahead of me to 23, and then to the finish.

Overall, it was a fun race, and I was happy to let my competitive side take over. Splits from most of the competitors can be found on attackpoint. It looks like I lost about 3-4 minutes in my blundering to 20, which is frustrating, but my own fault... should have trusted my own navigation! Fifth girl overall, I think.

Here are my routes, more or less. 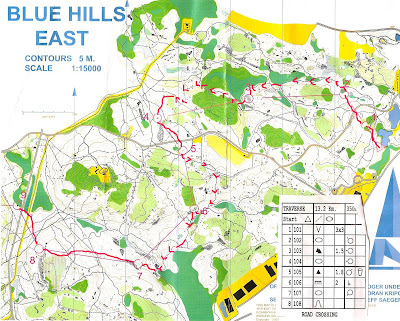 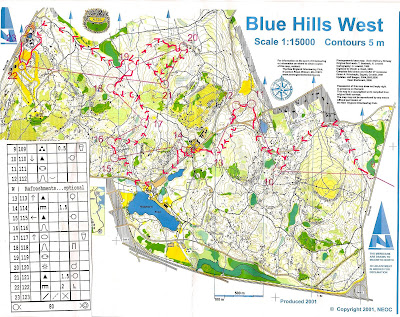