An A-meet is a national-level meet. B meets are sort of regional (I think), and C meets are just local, in case anyone was wondering about the terminology. CSU is more than just a skiing club, we also have a running section and an orienteering section, so I'm a member of both the skiing and orienteering parts. We happen to be one of the smallest orienteering clubs in the US, but I think we have much of the talent, because for some reason people stay members of CSU after moving away from the Boston area. What can I say, we're loyal to the Bermans. Anyway, we decided to hold an A-meet, and its been a bit of a scramble to get everything working. Some people did a TON of work to bring this together, I just volunteered on the meet days, but it went off without a hitch, which is always nice. The format was two middle-distance races on Saturday (a semi-final and a final), and a long race on Sunday. The heat was a killer, but luckily nobody actually died.

Saturday Ed and I got there around 7:30 to help set up the start, finish, results, childcare, grills for food, and other things. Ed was working results because he's smart, I'd be working starts after pre-running the F-21 course. The pre-runners started at 9, and it was tough to get my head out of setup mode and into race mode. My brain didn't really wake up until about control 7, which is a problem when there are only 10 controls. Being at the Fells, there are a lot of trails, so much of the running was done on trails rather than in the woods. However, thanks to my multiple mistakes and hesitations, I still ran slower than 10 minutes per km. Ugh. My map with my route is below. 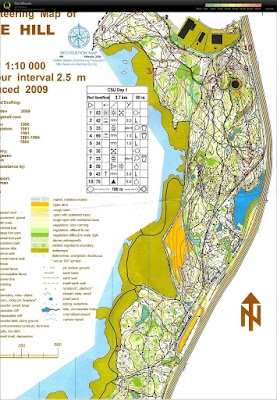 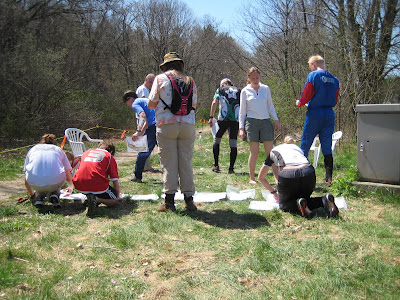 The start, a mix of recreational and competitive runners pick up their maps with one minute to go. 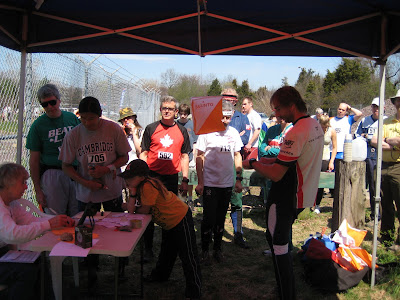 After cooling down (hard to do when its so hot), I stood in the sun at the start making sure the right people were starting at the right time for a couple hours. The finals weren't going to start until 3, but we had many more recreational runners than we expected, so the starts went for a long time. The clock in the shade at the start tent claimed it was 94 degrees by 2pm, so it was getting pretty toasty. I had finished the semi-final in 9th, 53 seconds out of the A-final (top 8). This sort of sucked, because it meant that I could either do worse or the same, not better, in terms of place. Luckily, the idea of two separate races didn't quite catch on and the results were listed as though it were one race...

I was more focused at the start of the final, and felt that I had a point to prove - I can run fast without making mistakes! I was actually looking around, which is a considerable help when you are looking for something. Of couse, I headed off on the wrong trail going to 1, and slowed way down when I was in the woods, but it was a mostly-clean run. There was a guy with a radio at control 7 and 9 (a butterfly leg, so we hit the same control twice), and he was radioing splits back to the start so that the announcer could announce things. It was actually quite exciting to listen to the play-by-play of the guys' race when I got back. Anyway, the radio was also the only water stop, and although it was a relatively short race I was starting to get shivers as I headed to control 13. I was starting to trip over rocks, being unable to pick up my feet, and I'm not sure if I was hallucinating when I saw the naked guy sitting in the woods. Nobody else saw him, but I was also the first one through.

They'd started us pursuit-style, and I was the second finisher (the first finisher was Kat, who is on the US team but had mispunched in the semi-final so had started first), and it was cool to get cheered to the finish. I had posted the fastest time of the B-final, but I was basically weaving my way to the refreshments I was so dehydrated. Stupid weather, who said you could go from a happy 65 degrees to 94?? 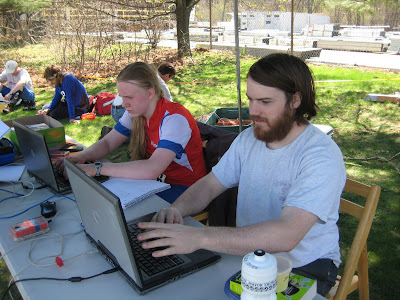 Ed getting his results on. 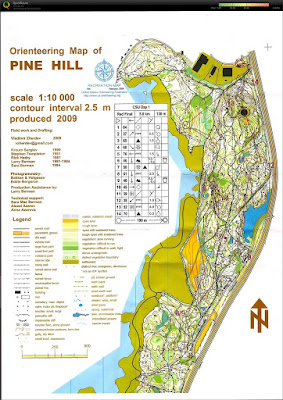 Sunday dawned hot and muggy, but since there were earlier starts, the pre-runners started before the true hotness hit. Ken Walker, the father of one of the guys on the ski-o team, started two minutes behind me, so we were battling it out for most of the race. Experience versus youth... experience won, but only by a minute and a half or so. What was funny is that we were both making huge mistakes (possibly because we were racing each other), and every time I would make a mistake, I would think, ok, Ken is gone, now I'm on my own. But then a couple controls later I'd see him again, after he made a mistake! The map was very green, which meant it was very slow running or sometimes just walking while trying to not get totally scratched up by brambles whenever I went off-trail. On an orienteering map, white means open forest, and the darker the green, the thicker the vegetation.

For a more complete write-up of my mistakes, check out my attackpoint log, the mistakes were large and plentiful, but I was feeling pretty beat down physically by the end. I just seemed to be unable to avoid thrashing through the thickest brambles, and I'd whacked my big toe on a rock early on, which made trail running painful. To top it off, I twisted my knee last weekend at West Point and although I'd thought it was healed, it certainly is not. Oh the excuses. I still finished in 6th place, but I think everyone else had to deal with more heat than I did, so I guess I had an advantage. 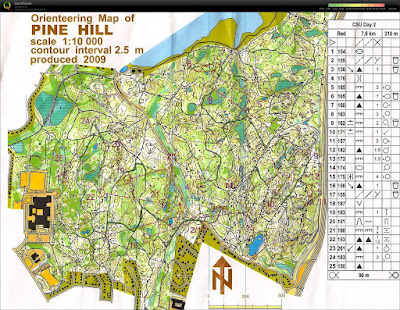 A fun weekend, overall, but not my favorite maps to run on. I need to give my knee (and my scratches) some time to heal, so I guess you won't be hearing about any more orienteering for a bit. I wouldn't say I'm known for my self-restraint around athletic activities, though, so this could be difficult!
Posted by Alex at 9:52 AM