This weekend, NEOC hosted two meets, a double sprint on Saturday and a regular course in Concord on Sunday. I figured, with nothing else to do, I may as well race, despite feeling horrendously out of shape. Granted, my "out of shape" and other people's "out of shape" are vastly different conditions. As a friend told me this weekend, "I wish I could be as out of shape as you!" Regardless, I knew I'd be huffing and puffing, and unable to rely on leg-speed to get me through these races.

I laced up the o-shoes (like track spikes, only more rigid in regards to torsional stability and with spikes in the heels too) Saturday for the first sprint, which was billed as more technical in terms of navigation, while the second sprint was faster and easier (they say). I managed to make approximately 10 minutes of mistakes on the first two controls, which really throws off your balance for the rest of the race. Although I was trying to run hard, I was also wary of making another massive mistake, so had to back it off a notch. I did the second sprint immediately afterwards, and it was almost boring compared to the first one. It was so much trail running that my feet couldn't keep up with my brain, and although I didn't make any mistakes, I just wasn't fast enough to do well.

The map below is a product of quickroute, which takes your GPS track and puts it over a jpg of the map. You can choose a bunch of points to drag around to make sure that the route fits your map, and once you're done with that, it shows your pace (in min/km) for each section of the route. Green is fast, red is slow. I only just downloaded this program and I pretty much think its the best thing since ice cream (because I don't really care about sliced bread). The Needham Forest map (below) is sort of boring, since its sprint 2 and all on trails and there is some doubling back and stuff, but the Estabrook woods map, from Sunday, is pretty sweet. 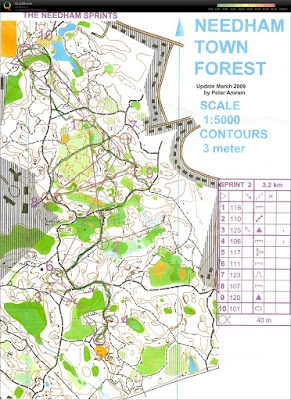 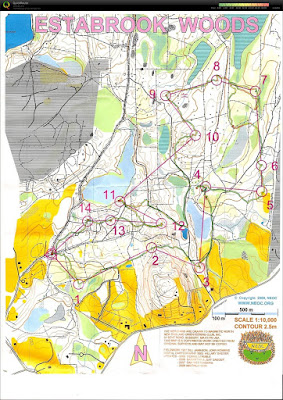 Sunday it was sunnier and warmer, but all of my little stabilizer muscles in my lower legs were screaming in protest when I tried to walk. Apparently, running hard in the woods makes those muscles work or something, but I figured that once I was running, they'd have no choice but to cooperate. This was a real course, 6km straight-line distance, no more of this sprint shenanigans. You can see my route on the map above, but the first couple controls were pretty fast, and clean. Bob Burnham, one of the CSU parents, had started 2min ahead of me, and although he used to orienteer he hadn't done it in 10 years or something, so I wanted to catch him. Unfortunately, he was running much faster than me, since I was stumbling more than running, given the condition of my lower legs and their inability to respond to things like uneven terrain or having to run fast.

I thought I'd probably lost Bob for good when I got near 4, because the fact that I hadn't used the port-a-potties before the race was catching up to me, and before anything could turn into a disaster I stopped to poop. However, when I picked up my map again, I was holding it upside down and I didn't realize this. I got very confused, and although I eventually realized how idiotic I'd been and reoriented myself, I'd lost something close to 7 minutes.

I caught back up to Bob at 6, he said he'd made a mistake, and I was cackling evilly in my head, as I stumbled off to 7 feeling very proud of myself. Of couse, then I made close to a 13 minute mistake, so it goes to show was feeling smug will do to you. I crossed the green stuff on a stone wall that was one wall too far south, and it was only when I caught myself thinking "will this bloody wall ever end??" that I realized I was probably on the wrong wall, since the wall I wanted to use was really short, but by that point I was across the swamp, so I ran north along the other stone wall, but realized I didn't know how long I'd been running or where I was, really, I saw a big rock that I decided to assume was the rock marked on the map, so I took a bearing to get back to the stone wall to the east by 7, and then ran south until I hit the intersections of walls where I'd meant to be originally, realized where I was, and ran north again until I got to the control. If that sentence was confusing, its because my brain was confused too. I should have been able to relocate a helluva lot faster than I did. Its like when you fall in a ski race, you don't just sit there, you get up fast and try to pretend it never happened. Well, here, I just sat there on the snow. For many minutes.

By the time I got to 7, I was kind of angry at myself. I was also tired, and I'd fallen face-first into a marsh on my bumbling way around the area. I tried to make good time to 8, but kept tripping over myself as my calves got more and more useless. I was clean through 10, and then I made another mistake going to 11. Another large mistake, I should say. I was merrily trotting along and then I hit that big trail and thought I'd be clever and cut through the woods to the other trail that sort of went directly towards 11, and somehow I missed that trail (??) and ended up back on the same trail I had been on, and when I checked my compass, it wasn't right, but I was thinking, eh, I'm on a trail, I should just run faster. So I ran faster, in the wrong direction. Luckily, I realized it before I made it all the way back to the start, but, it was another 13 minute leg, which should have been maybe 5 minutes. Yargh! The rest of the race was clean, if slow because of my legs, but lets just say its a good thing these results didn't count for anything... Probably 20 minutes of mistakes, that hurts!
Posted by Alex at 10:28 AM