April is perfect orienteering time - the woods haven't leafed out yet, there aren't any bugs, and its not too hot. Add in a couple days of the first beautiful weather of the spring and I'm pretty happy! The West Point A-meet (national-level meet) is a big meet, probably one of the biggest orienteering races I've ever been to, given that I tend to avoid the national meets to avoid embarassing myself. It was also incredibly well-run, which I suppose is easier when you have a zillion cadets running around doing everything efficiently. Can we hire some of those guys for our CSU A-meet next weekend? The terrain was typical Eastern NY terrain - hilly, with lots of rocks. Better than swampy with a lot of underbrush, I suppose... 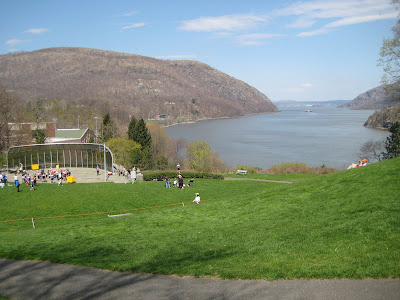 The start/finish area of the sprint, after they've taken down the start and are in the process of taking down the finish... beautiful day!

Saturday started with a sprint, on the West Point campus, and the afternoon featured a "downhill" middle-distance event, at the Victor Constant ski slope. It may have been net downhill, but there was plenty of climb during the race! Even the sprint featured plenty of climb, sending us up and down the bank toward the river a couple times. I am not that experienced at orienteering sprints, and my shaky navigation skills at top speeds showed as I made multiple hesitations and a couple actual mistakes. I felt much more comfortable on the woodsy section of the course, sprinting through buildings and parking lots on the second section meant faster running, but I couldn't keep up mentally and keep track of uncrossable walls and things like that. I ended up alright, though, as the 7th elite female (out of probably not more than 15, results aren't up yet). See the map with my garmin route (green for fast, red for slow) below. If you're a nerd, here are splits, I'm in 43rd (that includes the men). After lying about in the sun for a while (proper post-race cooldown technique when the sun comes out, naturally), it was time to head over to the ski area for the middle distance. 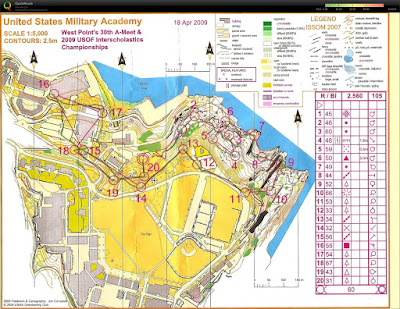 The start was at the top of the mountain. I suppose I'd rather have the 120m climb to the start be off the clock, but it was a heck of a climb. I have heard horror stories of orienteering in this area, how there is nothing to relocate from and none of the rock features you'd think should be mapped are mapped, since there are just too many rock features. I decided that I would just take it slow and focus on not making any mistakes, rather than dash off in the wrong direction as I tend to do. We got the maps, and off I went, slowly. I don't think I ever really got moving faster than an enthusiastic waddle, but at least I didn't make any massive mistakes. My route from 8-9 was decidedly less than ideal, all that green stuff meant I was crawling on my hands and knees at times, whereas had I gone further to the right I could have avoided most of it. I lost about three minutes on that leg. Then I made a couple smaller errors coming in to the end, but they were slow errors, so I caught myself quickly. It didn't feel like very runnable forest, very rocky and green, and I was frustrated with how slow it had felt. Nothing like seeing Time: 1:01:54. Distance: 2.92mi on your garmin to feel discouraged... I beat three, maybe four people, but I think there were only ten starters in the women's elite field. Below is my map with my garmin route. 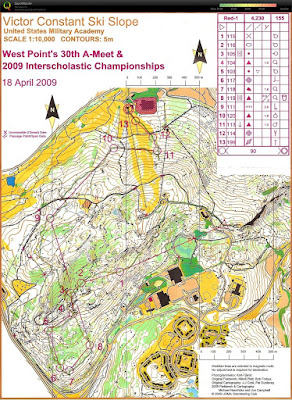 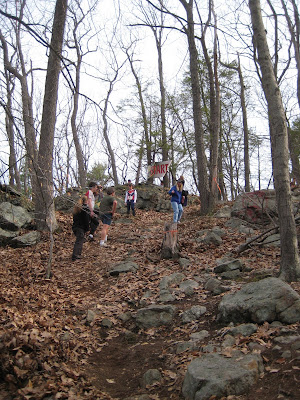 Hiking to the start.

I spent the night in Camp Buckner, with some local CSU orienteers, and that was nice because the start of the long distance on Sunday was at Camp Buckner, so we didn't have to drive anywhere. It was supposed to be raining but instead it was sunny, so I was happy. I realized that I had to be a little speedier than yesterday if I wanted to do well, so "be speedy" was my mantra for the day. I still planned on starting carefully and not making mistakes, but I was going to do that in a speedy manner. I was pretty clean and relatively speedy through 6, and then I made a sort-of mistake going to 7, I decided to try and contour around through the boulder field rather than drop down into the boulder field and climb back up the other side to go on a straight line. I went a little too far uphill, but luckily saw the big cliffs that 7 was hiding behind and was able to fix my mistake before it became a bad mistake. Then going to 9 I sort of zigged and zagged a lot, which was decidedly less than ideal, especially when most of my competitors ran up the road and around that way. It looks farther, but you can go way faster on a road than through a boulder field, its really hard to be speedy in a boulder field. 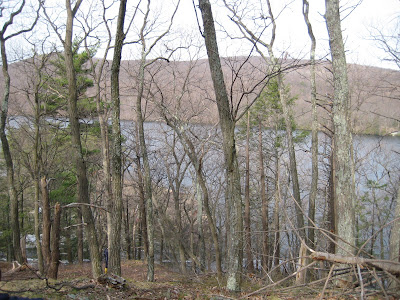 As I headed to 10, a girl caught up to me, and I caught up to a guy who I had been seeing glimpses of. I realized they were both running red (the elite women's course and the M35+ course), so I'd have some company. My pace picked up significantly after running into them, as I tried (unsuccessfully) to drop them to 11, and then again to 12. There was a game trail (or possibly a cadet pre-runner trail, given how straight it followed my compass bearing) going from 11 to 12, and I was trying to drop my competitors, but I think they were just enjoying the ride. I ended up a little too high on the cliffs to 13, and both of them got there first. The guy pulled away on the hill up to 14, and I was starting to admit to myself that if she'd caught me, she was probably faster, so I was (speedily) trudging up the boulder field behind her. All three of us sort of messed up 15, that short little leg, because there was just too much rock in the area and we kept looking at the wrong ones.

Then to 16, I discovered that I could careen down hills faster than my female competitor (but slower than the guy), and I put a 20-30s gap on her! This was it! I needed to get out of sight. I hammered up the trail to get to 17, and glancing behind me I saw her starting to go straight through the woods. It was on, now I just had to run fast, which is a lot easier on a trail with good footing than through leaves over pointy rocks. I had to sort of loop around to get to the bottom of the cliffs where 17 was perched, but she wasn't in sight, and I took off to 18 actually feeling speedy and successful. I was moving alright through the woods except for those areas with the green slash marks - those were brambles, which liked to lose their thorns into your knees. I tried to just ignore the stinging and run faster, but spandex wasn't doing anything for the thorns, and I was glad to hit the field and the finish. The girl I had been racing came in a couple minutes later, and although she ended up beating me by almost four minutes, I still felt (deep inside) that I was the victor here. It turns out she is Russian or something, which makes it even cooler. I was psyched to have actually been somewhat fast in the woods, and to not have made too many mistakes. I ended up about 8% back, which is darn good in an orienteering race. Last I checked I was 5th, but those were the unofficial results. Maybe I should only do the long distance courses... 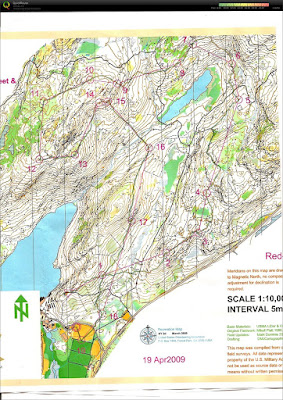 I then spent most of the car-ride home attempting to extract thorns from my legs. Some of these suckers aren't going to come out until they work their way out in a couple months... 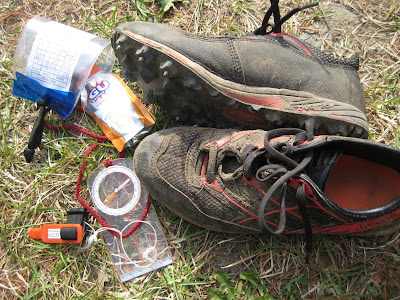 Tools of the trade. Compass (a fast one, that settles quickly enough to run with it), e-punch, clue-sheet-holder-thingy, gels, spikes. O-shoes are awesome, they're narrow enough that they don't get caught on rocks and things when you're trying to put your foot between rocks and things, and the spikes on the heels as well as the toes make them reliably grippy when running over wet logs and cliffs and things like that.
Posted by Alex at 9:36 AM