While I've run plenty of orienteering courses, I'd never set one before, so when it was my turn to host a park-o meet (every CSU member puts one on at some point), I had to figure out how to do this. I didn't think it would be difficult, and setting the actual course wasn't difficult, but putting the controls out there was mildly stressful, as I realized that my usual technique of "go to the right area and look for the orange flag" wasn't going to fly when I was the person holding all the flags. It worked out, though, and nobody got lost, and I didn't see anyone crying, either. One of the beginners did take a nasty spill and cut her knee open, but she didn't let it faze her and she finished the course. 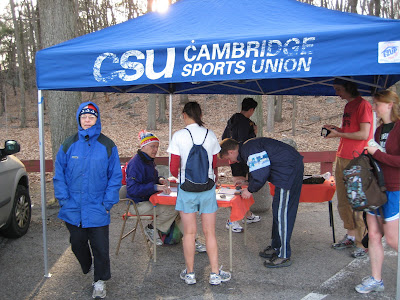 The CSU skiing tent, being put to a different sport's use. 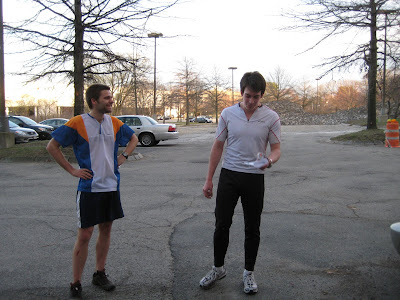 Ross and Ian talking about the course 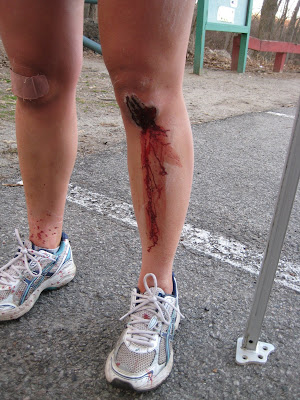 One of the girls running beginner figured out quick that to be good at this, you gotta be hardcore! 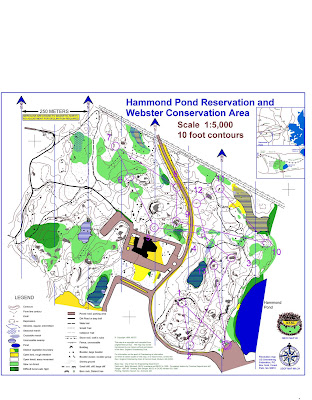 The advanced map. I tried it make it interesting, but there just isn't that much terrain to work with at Hammond Pond. Luckily, there are plenty of fun bits to keep it interesting.

So to set up an orienteering course, as far as I understand, you have a bunch of steps. First you need the map, ideally in ocad format so that you can draw the course on there digitally. If you have neither the map in .ocd format nor ocad on your computer, you can just scan the map and use purple pen to draw the course(s) onto the map. I don't really know how to explain designing a course, I guess you just make it as interesting as possible. I wanted mine to be pretty route-choice-y (thats totally a word), but I don't know if I succeeded in that regard.

Once you've drawn the map, you have to print it, ideally with the control clues (oops), and then you have to set the course. If the park is really big, or you don't think you can carefully scope out the control locations fast enough before the meet, you go out there with surveyor's tape first, and do the hard thinking ahead of time. Then, closer to the event, you hang the flags. It can be problematic on beginner courses at popular parks when the controls get moved or stolen, since they're often on or near trails, but we didn't have a problem with that this time. Yay!

Then when everyone has finished running, you go and collect the controls (and any streamers that are still out there). Success! And of course, you need results (which aren't up yet), because races don't count if you don't have a result, right? So I'll probably hold another one of these at some point in the future, but hopefully not this year. Its a lot more fun to just do the race than to have to set it up...
Posted by Alex at 2:40 PM

I laughed the first time I heard about someone crashing while trail running. Then I started running. If I can get through a strait repeat or tread mill session without eating it, I'm pretty happy.

I always thought I was decent at running down hills until I saw a real trail runner do it. They go fast enough that I bet the consequences of crashing are worse than just a skinned knee...