This weekend was one of those super-invigorating clinics (I guess work-type people call them workshops, but its all the same), where you leave so full of ideas you think you'll burst. At least, thats how I feel. It was also great to see how many things CSU does right, even if we've arrived at these things by different routes. We had Nina from Gunstock (I can't spell her last name), who was a multi-time olympian and I think had at least one medal, and Andy Newell, from the USST, come talk to us. It was really interesting to see the difference between their skiing styles - not only was it the male/female skiing differences, but the sprinting/distance differences. Fred Griffin (another presenter, but not quite an olympian) described some of his skiers as "hungry, and ready to eat raw meat". Well, Andy's skiing was the raw-meat-eating style of skiing, and Nina was a ballerina. Really interesting to compare. 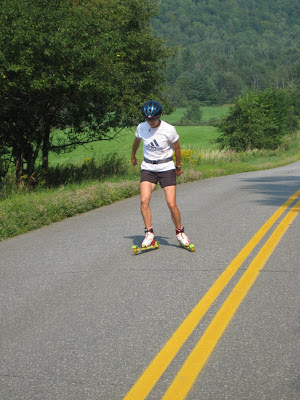 Nina floating up the hill. 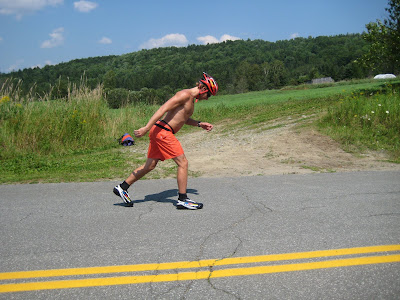 Andy showing us how NOT to classic ski. It was pretty amusing watching him try to ski incorrectly, he couldn't really do it. 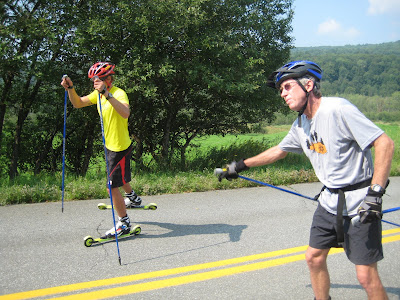 Fred pointing out something Andy is doing while skating.

Now that I'm full of ideas, its time to see what the people actually in charge think of these ideas... step 1, acquire some wicked slow rollerskis for Frank so the kids can keep up in L1!
Posted by Alex at 10:37 AM

How did your compartment surgery go? For how many weeks was your leg swollen and when could you began walking without pain?