SkiWOC always has something called a "model event" the day before the competition begins, and it is basically a chance for competitors to check out a tiny area of the map, see the mapping style and printing-of-map style and how controls will be hung and all those lovely technical details about how ski-o works.  Also, it's a chance to test skis and wax.  So, we headed over to the stadium to check it out, and it was a slushy, sloppy day today. 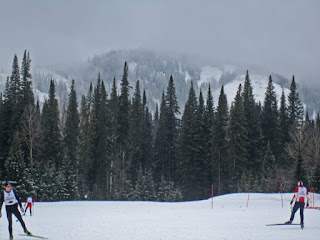 Ali skis off into the misty distance testing her skis. 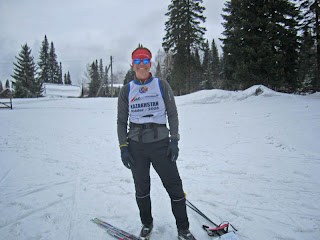 Anna is from Sweden, she's used to gray.  Psyched! 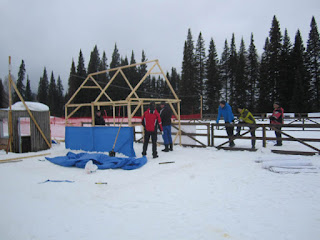 In the time I tested two pair of skis, they'd framed a timing hut. 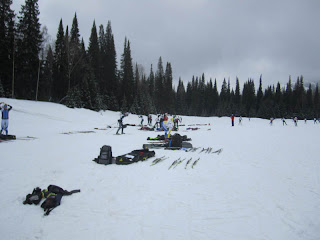 Stadium.  none of the teams had benches out, guess they'd prepared skis earlier and athletes were just dialing in their fleets. 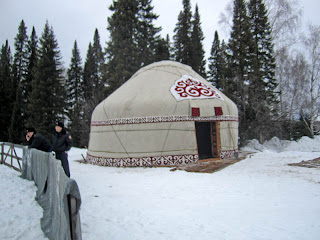 Officials' yurt in the stadium 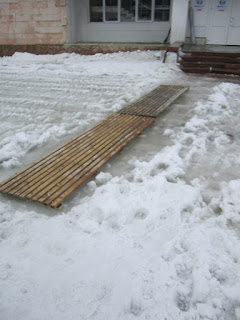 Lots of slush - no drainage, so we'll just put down some palettes to get to the food building. 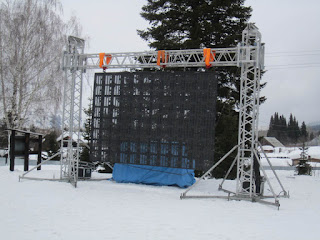 This photo is for Ed.  Look, Ed, electronics!  I imagine this'll be the big screen where they show the GPS tracking and video and stuff. 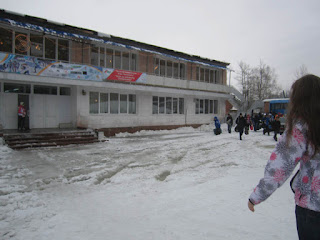 So, if I thought our travel day was long, this is a photo of about 25 athletes and some additional officials getting off a bus at 9am, that just came up from Ust-Kamenogorsk - that had left yesterday at 6pm.  The roads had been so bad with the slush that the bus got stuck, and they spent the night on the road.  In the bus.  That sucks!! 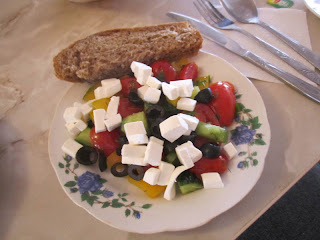 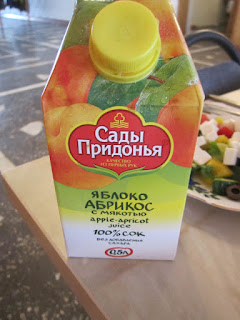 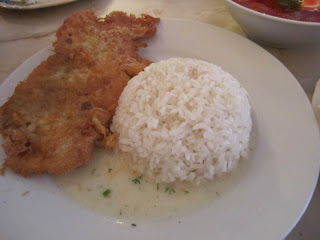 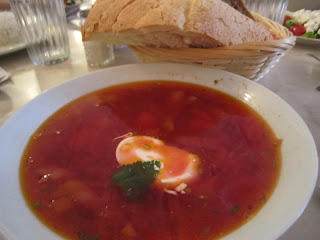 After lunch, we did some ski waxing, and showered - showering is a bit of a process, because in this school, there is one shower room, so you sort of have to coordinate, without speaking the language or having any good way to communicate, as to when it's the girls-shower time and when it's boys-shower time.  And I still haven't found a faucet that makes hot water, just lukewarm, though everyone else says their showers are hot.  Then off to opening ceremonies, in Ridder City (City is apparently the same word in both Russian and English, hence it being called that). 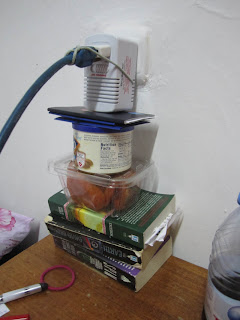 The tower of power!  Sketchy waxing setup to get power to the iron, out of the balcony... 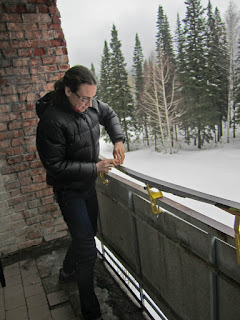 There are indoor facilities, too, but there is better light and better ventilation outside.

A brief tour of the building - here is the outside: 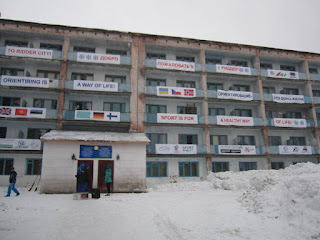 Here is Anna and my room (Ali is in the single, since they gave us two rooms).  Looking in from balcony, and looking out.  Behind the door with the towel is a small entryway, with a mirror and where we store our skis.  Also, a bathroom. 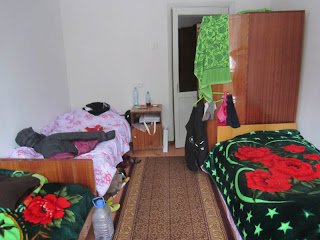 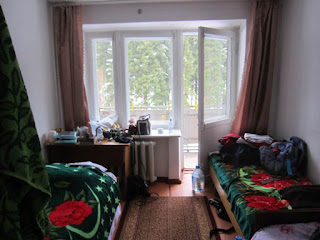 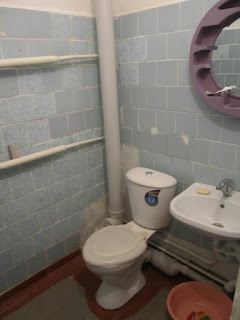 Bathroom - normal, except that you can't throw the toilet paper in the toilet - it goes in a trash can that they empty every day.

So then, it was off to the city for opening ceremonies.  About 45 minutes on a bus to travel 12km, on some really sketchy road conditions.  Our favorite sketchy suspension bridge crossing is EVEN BETTER in a big bus.  Ice dam is about to go - hope it doesn't take the bridge with it. 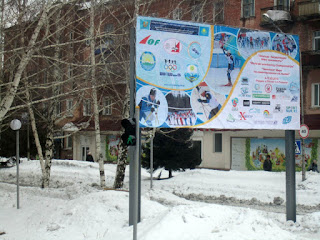 They had a billboard for us!  Sweet. 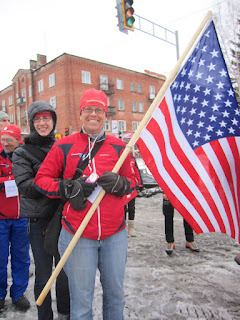 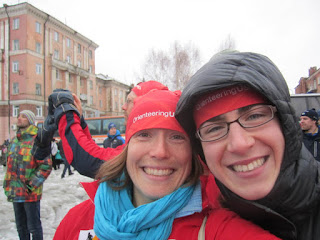 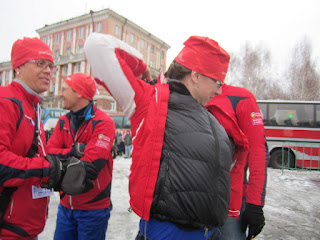 Ali attempting to fit the team jacket over the megapoof.  She did it, only slightly sausage-afied. 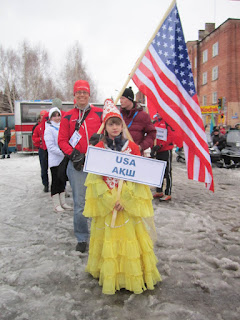 Team USA, with our cute lil' Kazakh child in costume to lead us.  Through the slush. 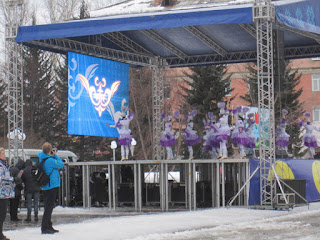 Purple princesses, another traditional costume, dancing onstage, just after having a whole load of slush fall off the roof of the pavilion and get them soaking wet.  Resilience!  We also saw some drummers, some people on banjos (probably not banjos, but that's what it looked like), another dance group, and a singing group and quite a few speeches, in Kazakh, Russian, and English. 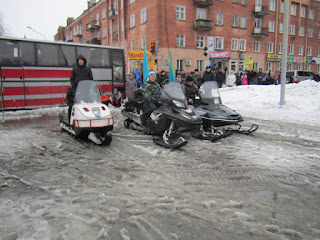 The reason we were all standing in a slush puddle was so that they could drive around these snowmobiles, with Kazakhstan flags.  I still don't really get the point of that part. 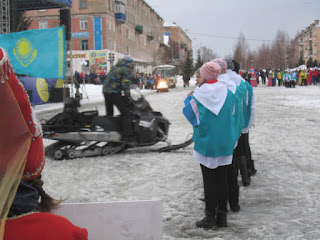 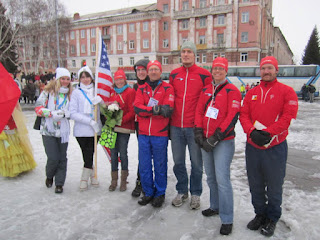 Team USA, with our translator and her friend - Alina and Natasha.  Left to right - Natasha, Alina, me, Ali, Scott, Greg, Anna, Adrian. 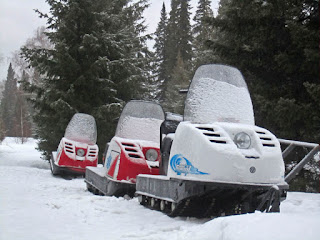 And half the fleet of snowmobile groomers, waiting to go in the morning.

Tomorrow is the sprint.  It's possible that there will be GPS tracking and live results and stuff here, but I don't read cyrillic well enough to know more than that.  This thread on attackpoint will probably be updated fairly frequently with information about live following, and is in english =).
Posted by Alex at 10:20 AM

Wow, great job with the blog posts. Thanks for all the updates and photos! Good luck for the sprint. Fingers crossed for good spectating opportunities.

Nice posts! Thanks and hope you will have time to keep 'em coming.

Sending you and the team all the best Navigation and Speed Charms (H Potter speak) and success wishes.

Thanks for the posts. Keep up the awesome job!