Apparently being on the complete other side of the world messes with your body's sleep cycle so much, that jetlag doesn't even really matter anymore. Door to door, we're talking 43 hours of travel time - I think we thought we were nearly done traveling when we boarded the plane for Ust-Kamenogorsk (also known as Oskemen, in Kazakh, but it seems that at least among the ski orienteers in this country, they all speak Russian), but actually, we had another 11 hours to go. The plane thankfully didn't crash (eep!), and Irina, one of the Ski WOC organizers, met us at the airport. It had snowed a lot in the mountains, and was still snowing, despite pleasant temperatures in the upper 20s, so the road to Ridder was closed. So, Irina was going to put us on the train with our translator, Alina, to get us to Ridder, where another bus would meet us. We had an hour or two to kill, so headed into the city for some pizza. This nixed the plans for a recovery jog, so Ali and I headed out to do some silly walks in front of the airport while we waited for our ride to the pizza, drawing some very funny looks from the folks waiting for a bus. Whatever, it felt awesome to get moving enough to breathe hard, and to be outside. 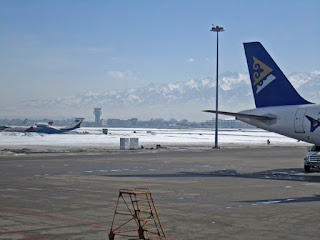 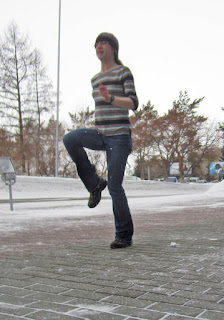 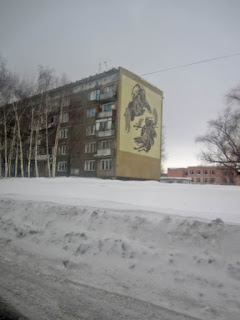 Cool wall murals on the run-down apartment buildings in Ust-Kamenogorsk. 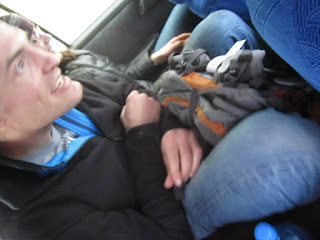 Crammed into a little car.  Greg is big, and doesn't fit well even into big cars.  A side note on driving in Kazakhstan - it's terrifying.  Traffic rules are more like suggestions, and blatantly ignored as long as you honk the horn first.  The roads are more like luge runs, which is fine when nobody is in the way, but in the city, our car clearly had trouble stopping where others were stopping a lot sooner.  We must have nearly killed three pedestrians, too, so all in all, I was cool with taking the train.

So, a quick pizza break in Ust-Kamenogorsk, then onto the train, which was a bit of an experience, and took 4 hours to cover 100km. There aren't stations, the train just stops places and people get out and cross the tracks and walk off into the snow. 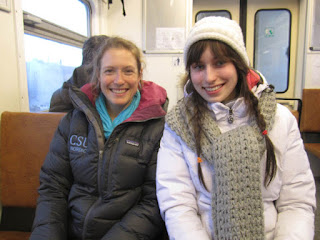 On the train with Alina. 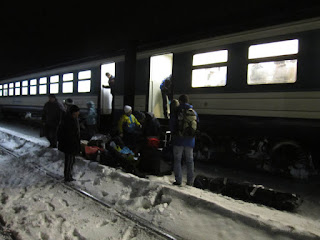 The organizers unloading into the train "station" in Ridder.  Lots of stuff, and I'm sure more to come!  Ridder City is the middle of freakn nowhere. 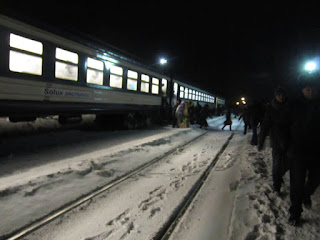 I had no problem falling asleep, and could have kept sleeping far past the 8am wakeup for breakfast.  The meals here, aside from certain things like butter in your rice pudding for breakfast and mayo on your pizza, are quite acceptable - fruit and vegetables!  So far, the food is far exceeding my expectations! Granted, my expectations started low. 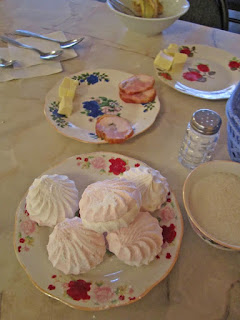 The place we're staying is the Lesnoye Sports School, which is like the Stratton Mountain School of Soviet Russia, and when the USSR broke up, this became the only ski school in Kazakhstan - home of Vladimir Smirnov!  Back in the day, there were ~200 students here (there are ~200 rooms, but with 2-3 beds per room, that's a lot more than 200 students), now there are 35 or so.  It's definitely soviet architecture, and quite a few decrepit buildings out there, too.  I like the paintings on the walls inside, though. 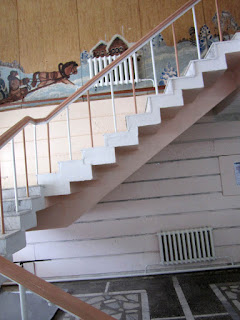 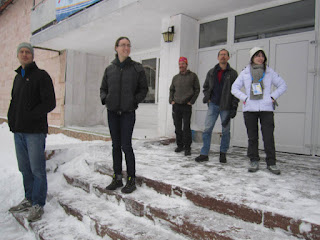 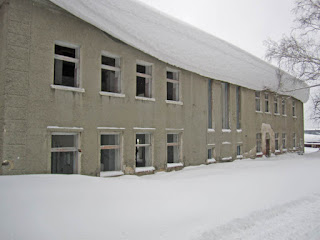 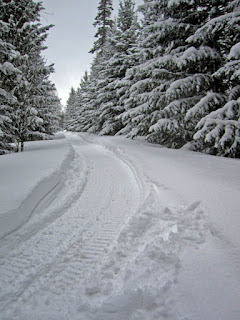 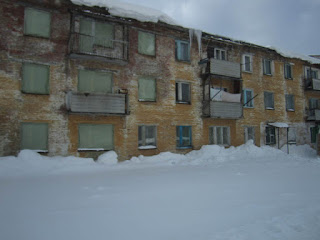 Nearby buildings, and I think people live in them, but quite broken-down looking.

Nice looking river - this area may be used for natural resource extraction, but at least it looks pristine.

So, we wanted to get out skiing today, and Alina got us hooked up with a bus, to take us to Sinegorye, a nearby area that has a ski-o map, but we couldn't get there until the afternoon.  So, we all went for a jogeroo after breakfast, just to loosen up and stretch out the legs, then some ski scraping/waxing, and then time for another luge ride in a bus.  They have seatbelts, at least.  The skiing was great - warm, greasy, fast and compacted, and sunny!  I was very happy to get out skiing.

Greg brought his camera on the run.  the giggles led the way! 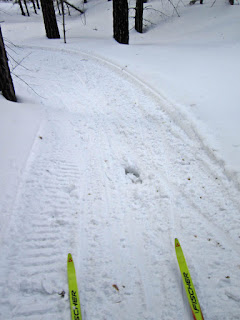 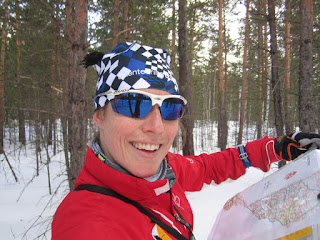 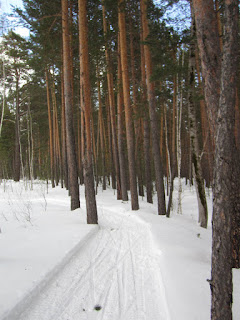 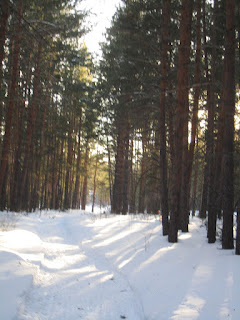 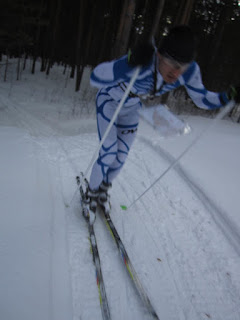 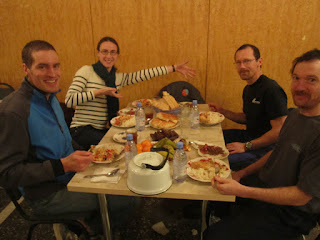 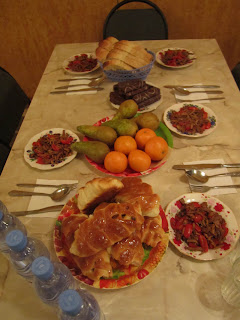 Dinnertime!  Tonight was a good one.  Salad of unidentifiable meat and tomatoes and canned mushrooms, then the main course was a salmon-like fish, with cheesy goodness on top, I think with olives and tomatoes mixed in, rice, and some sort of pastry thing filled with plumped raisins, then good bread, fruit, and chocolate marshmallow things.  So much better than kartoffles + mystery meat!
Posted by Alex at 10:37 AM

Hi!
I am writing a thesis about the long distance race Birkebeiner in Norway and sosial media. As I can see you are very active, have your own blog and keep a training dairy.May I ask you if you have participated in Birkebeinerrennet? And do you know other skiiers who have blogs like you?

I have not done the Norwegian Birkebeiner, yet! I don't know of too many other skiers who are in my position of a senior skier who still races but is not professional, but I do know that Alison Crocker has done the Birkebeinerrennet, and still trains as a non-professional senior skier. She logs her training here, and you can contact her through that. Good luck!

Nice blog posts! There´s always a special treat to get so many pics from far-away places.
Keep 'em coming.
/bubo

Great pictures and write-up. Thanks for posting. Getting off a train like that, in the dark, with no buildings, takes some faith if you've never been there before.

Great to know that you got there and Irina was there to greet you. Good luck! Great to see the news!