Last year I did the Craftsbury opener, and they had slightly better snow, but ran it as a skate race. This year, on less snow, it was a classic race. So there were a couple spots where some dirt was poking through, and a couple spots where they shoveled (you volunteers ROCK! You shoveled for a season opener race!), and they were advising to not use your best skis. I handily ignored that advice, used race skis, and was fine. At least, I think I was fine, I haven't cleaned the skis yet or checked out the bases, but I'm pretty sure I didn't go over any rocks. 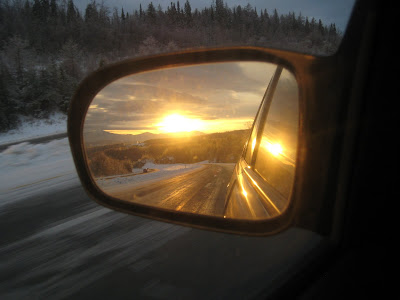 I got up at the butt-crack of dawn, and didn't see the sun until north of Franconia Notch. The roads were good until I got to Vermont, where they went from dry to covered in glare ice. This seems to be a common theme when I cross from any state into Vermont. Anyway, I still made it to the race with about an hour to spare, which was plenty of time since it was a multigrade purple day, easy waxing. There weren't that many other people in attendance, Burke, Craftsbury, and a handful of others like myself. We started two every thirty seconds, one boy and one girl, so it was a relatively lonely race.

I started out, and by the time I got to the first downhill, Topher Sabot, a fellow Alpina racer who had started behind me, caught up. He was passing on the inside of a corner, and got into a rut that threw him outwards into me. For a minute I thought we were going off the edge of the trail and into the trees, but I guess being experienced skiers has its advantages because we stayed upright and on the trail. He was pretty apologetic, but then said, "We're wearing the same uniforms - this should be a new sport! Synchronized skiing!" And I was laughing the rest of the way down that hill. The rest of that lap was sort of a slog, if you got out of the tracks you had to herringbone because the snow was just too deep, sugary, and filled with ice chunks to get your wax to stick, so there was a fair bit of herringbone running. I sort of felt like I was in slow motion but I was having trouble gauging my speed.

By the second lap I knew I had to pick it up a little, but I was still stuck in this slow motion feeling. Finally some of the Burke Mountain boys started to catch me from behind, so I had the incentive to see how long I could ski with them. On the last major climb, another guy caught up to me, and then as we got onto more skiable snow rather than herringbone-able snow, it turned out I was faster, and almost ran him over coming over a bump. Oh stiff skis, how awesomely you run! Anyway, I held him off almost into the finish, but his finishing sprint was faster than mine. I ended up winning my age class, and I was third overall, 44 seconds behind the winner, 20 seconds behind second place, (40 minute race) both of whom are really good classic skiers so I didn't feel that bad about it, especially given my slow motion race. But I'm going to need to remember how to go fast before next weekend.

And now its 60 degrees and raining. December weather in New England is a fickle thing...
Posted by Alex at 7:50 AM