These came in the mail yesterday. 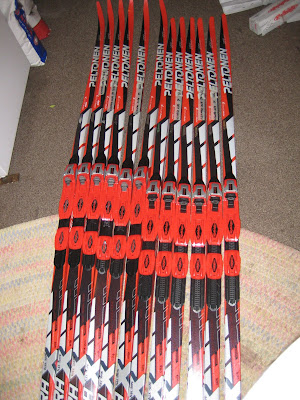 Only without bindings. It didn't take long to figure out how to use the NIS plates, and the concept seemed very simple, but the practice took much more elbow grease and much less wimpiness than I had on hand. The gimpy thumb didn't help.

So I've waxed up the skate skis by now, and I tested out the WSB (wet snow base) skis at Weston yesterday. It was indeed wet snow, in fact I'm surprised there was any snow. But the verdict is that these WSB bases looooove the wetness, they were flying. Wax was toko LF moly, for all y'all wax nerds saying "but you must have had the right wax!"

Lets talk about ski prep for a minute. If you've just gotten new skis, and you didn't get them stoneground and hotboxed, or you got them stoneground but not hotboxed, you have to prepare the bases for them to run optimally. Ian Harvey wrote a really nice article for the Cross Country Skier Magazine explaining why you have to do what we do to prep skis. You need to start by brushing the base, a stiff nylon brush or soft copper brush works well, and then iron in, scrape, and brush 4-5 coats of a really soft wax. Then alternate a really hard wax with a really soft wax twice, scraping and brushing in between. Then a layer of graphite or molybdenum (I honestly don't know the difference between them, but I hear they all do the same thing in regards to static-ness), then your wax of the day, and then you're good to go! I was speed waxing this morning, and I got through three pair of skate skis in an hour. Thats fast. If I dare say so myself.

On a more important note, for those of you who don't ski or care about skiing, I will be making one more appearance at a cross race - unfortunately not to race, but the Ice Weasels Cometh will have cupcakes! You can get your drooling started now, the flavors will be car-bomb cupcakes, creamsicle cupcakes, and mint-chocolate cupcakes. 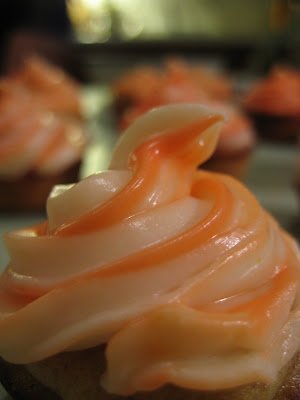 Well, we skied yesterday on good snow, they've got snow along the pines on the road side, but we'll see if it lasts. They've got some big piles, so here's hoping...

I bet you miss it, don't you! Any skiing at the loaf?

I'm jealous of all those new skis. Maybe when my kids are done with college......sigh....

Just go and get yourself sponsored... you'll have more skis than you know what to do with!

There was skiing at the loaf last weekend, and where there was cover it was really good skiing. The rain yesterday probably did some damage, we'll see how it looks after the snow tonight, I'll be up there on Saturday and Sunday most likely.