Headed north in the midst of a snowstorm with Rob Bradlee, Jamie Doucett, and Erin Dubinski for the Eastern Cup this weekend. We got there without mishap and had a lovely nighttime snowy ski, and I wish I'd figured out how to capture that image of the skier ahead of me sillhouetted against their own headlamp. 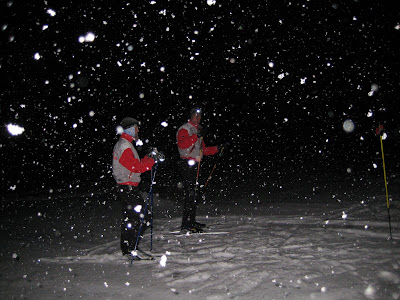 Saturday dawned cold and still snowing, I headed up the hill with the rest of the CSU team and we waxed some skis and got ready to race. I managed to putter around for too long and didn't get in a proper warmup, before I realized that it was time to do some racing. The course is a new one, and its not easy, it goes down, through the sugar chute and around the sugar shack, and then back up. Warming up on the course I don't think I actually skied the whole thing once, I would always resort to walking because I'm just that out of shape. Anyway, I had rocket skis that took me down the hill really fast, and by the first part of the uphill I'd caught Cambria McDermott from Stratton. Unfortunately, soon thereafter my lack of a warmup caught up to me, and by the time I'd reach the top of the hill in the false flat I was barely able to stay upright. Cambria didn't pass me back, but it was probably because she was worried I'd topple on top of her if she tried to get around.

I cooled down and treated it like I'd made the heats, but I was pretty unsure for a while. Jess ended up like half a second out of the heats in 31st position, and I somehow put myself into 18th. Damn, I'd have to race again. If I could have traded my position with Jess I would have. The hill on that course hurt that much.

I warmed up again, with more wax on my skis this time, and my body just felt like crud. Doing some pickups it felt like I was pulling lead weights behind me, I was having doubts that I could even get up the hill at sprint pace. But I decided to trust my training and hope everyone else was tired too, so I lined up with eventual race winner Jennie Bender and some other fast girls, ready to face the pain. The gun went off and I sort of churned in place for a second instead of moving forwards, bad start and I was in the back, I double poled hard into the hill and was moving up as I zoomed into the downhill. Then I popped out of the tracks, and was somehow stuck in that tuck position, I couldn't get my legs to move fast enough to change my forward vector from ditch-ward to trail-ward on the turn, and as a result almost fell into an 8-foot deep gully where the trail crossed a stream. My left ski was dangling in the air and my right ski was barely on the trail, but I stayed upright, which was good because I'm pretty sure I would have broken a leg going into that ditch at that speed. Then it was a fight with my head to stay in the race, the logical part of my brain telling me to just ski fast and ignore the ditch-incident, the emotional part of my brain screaming "OMG you almost died!!!!!", it was quite the argument. I caught up to Chelsea Little of Dartmouth on the uphill, tracked her and started up the steeper part of the hill, but now my body had joined the emotional part of my brain and my legs were loathe to obey the rational side. As I crested the hill, now behind Chelsea, my right forearm decided to play this game too, and cramped up, making double poling rather difficult. It was miserable, there is nothing like sucking while trying hard, at least if you're sucking while not trying hard you can tell yourself that you would be better if you tried harder. 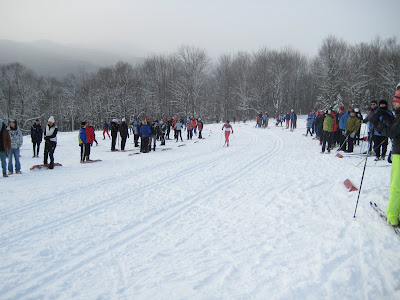 The only positive point about that race was that I was able to smile at the end. Maybe it was a grimace. I'm not sure.

Marsha Rich organized the soup and food for after the race, it was awesome. Here, most of the team gathers around the food. 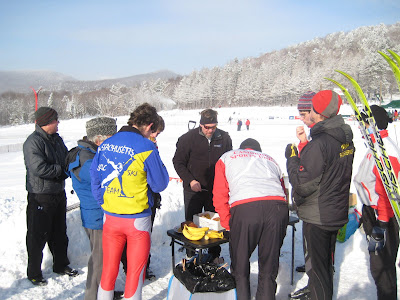 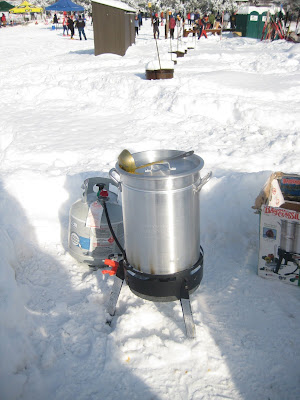 Our J2s rocked it, with Jackson in 2nd, Eli in 6th, and Neil in 9th. Hannah won her B final in a dominating way and ended up 6th. Below is Eli going from third at the top of the hill to first by the finish. 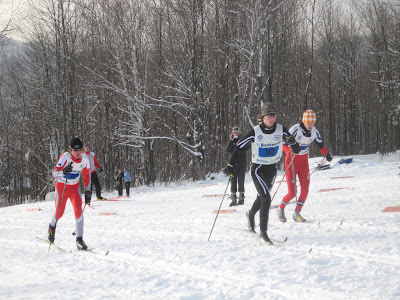 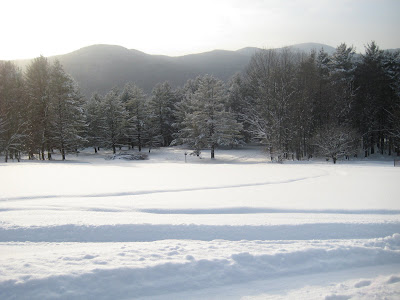 Trapp's trails glittering in the brief moments of sun on Saturday afternoon...

It didn't snow that much overnight, but it was still cold when we got back up to Trapps for the skate race on Sunday. The new John Morton trails are a ton of fun to ski, but they're tough, with a lot of climbing. I joined the CSU chain to pre-ski the course, and I definitely felt a warm fuzzy to see 22 skiers skating up the trail all in a line with matching jackets. Thats PRO.

I started early in the second seed, and the snow was just starting. The real snow, that is, it had been snow showering all morning, but it snowed like 4 inches between the start and finish of my race (I might be exaggerating). The course starts with a good long downhill, and I was glad to have glasses for that. I caught up to a UNH girl who had started 15 seconds ahead of me by the bottom of the hill (fast Peltonens, woot!), blasted up the short little kicker after that one, and hit the second fun downhill. Climbing up the first real grind of the course, my glasses started to get too much snow inside the lenses, so it became a real challenge to see. Either freeze my eyeballs open without sunglasses, or put them back on and only see blurriness. I opted for the frozen eyeballs. The long grind levels out into something flatter before you go down a short hill and then do some uphill switchbacks for a while, I could see Keely Levins ahead of me and it was nice to have someone to chase. The snow was starting to get pretty soft, and I had to focus on a light quick tempo to keep my skis moving. The final false flats leading to the finish were incredibly painful, but I forced myself to keep V2ing, and although I didn't catch Keely I was darn close.

I ended up 17th for the day (170 starters), just 6% behind the winner (Sophie Caldwell), which is definitely better than any of my eastern cups last year. They also broke it out by age group, so I ended up on the podium for senior women, with Jess on one side and Lauren Jacobs on the other. Go senior women! 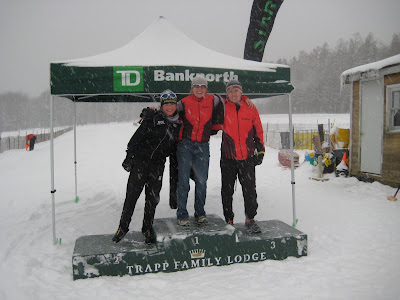 What with snow coming down in biblical proportions, Ilke got the right idea and headed to the mountain for some sweet turns, while the Boston crew left for home, after some debate as to whether it was worth staying north or not. Luckily, there weren't too many cars on the road, they had probably all been scared off by the dire warnings, so it was a clear road home. So much snow!! 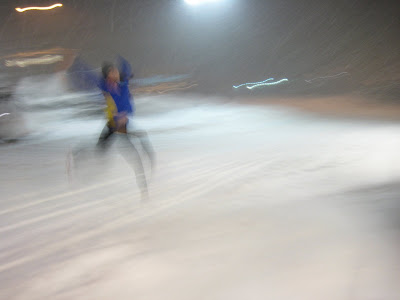 Wait, are you allowed to track people in a sprint?

I think you're allowed to say whatever you want, but your competitors don't have to move. She did move though. It was nice.

Very nice use of PRO, alex.
Good job this weekend!

I don't think that 4 inches is too much of an exaggeration. There was certainly close to that much new snow on the course when I warmed up with the back end of the girls field. Another couple inches came down while I was racing.