Since the Crashbury opener was moved to next week, which actually works better for me, I decided to hit up the Great Glen Sprints this Saturday, and make it a weekend of skiing. I picked up Erin, one of my CSUers now in college, along the way, and having company made the drive far more enjoyable. I left at this time of day: 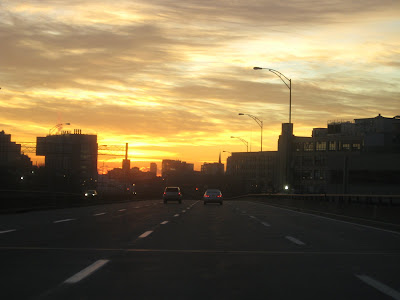 Upon arrival at Great Glen, I went to change into my race top and realized I'd forgotten it. I almost didn't race, because my ego can't handle not looking PRO at all times. Erin talked me through this crisis, and I went out to warm up. I quickly noticed that my heart rate was running really high, and I felt pretty weak. This sort of stuff scares me, because that weak feeling is how I feel during and after the fluttery heart things, but the high HR was not abnormally high, so I tried some pickups. These just proved to tire me out, my three minute level three pickup turned into thirty seconds before I had to stop and rest on my poles... yikes. You're probably thinking HTFU, but, to ignore a high heart rate that might be an indicator of oncoming sickness and do a sprint race would be stupid, with nationals just four weeks away.

I spent a while trying to decide whether I wanted to even start the race, doing the total paranoid athlete thing and being scared of trying to push through something that might have consequences, and then I realized that it was 11:30am and I hadn't eaten anything since breakfast at 6, so I went and ate food. That didn't help the high heart rate thing but I was much less hungry.

Great Glen had about 8-10km open on the trails, but it was pretty sugary snow over a hard icy base. They chose to run the sprints on their snowmaking loop, up top, which was about 400m long. The first heats would be two laps of the course. They did an interesting thing with the qualification round, in that instead of having an individual qualification (which probably would have just taken too long), they seeded the skiers randomly into heats of four, and two people moved on. This method would never work in a larger race, and even with the 100 people signed up, it was a little faulty, as it meant that the final wouldn't necessarily be the fastest people, because what if the four fastest guys were all in the same qualification heat together? Anyway, it made for a much more fun qualification, but maybe next year they'll seed the racers by NENSA points or something to make it more fair...

My first heat was with Kirsten Gill from Bates and two UNH skiers that I didn't know of. I started out fast, and took the first corner in first, but Kirsten came around on the downhill and edged me out as we went into the second lap. We'd gotten a good gap on the two UNH skiers, so I made no move to get around Kirsten, and we glided in first and second to move on. I should mention that there were some loooong waits, as they started the men first, at noon, and then ran them all the way through their qualis before starting the women, so really we were starting at 1pm, which would have been nice to know before I started warming up at 11.

Second lap, they changed the format, so that the skiers would only do one lap of the course, and only one skier would move on. I checked my heat, and saw that I had Natasha Kullas as competition. I know she is a fast sprinter, and after watching some of the guys' heats, it became obvious that if you were not starting in the left lane, and you weren't leading 15 feet into the race, you would not win it. This was because the course narrowed just before the finish to avoid an icy patch, and with 10m to the finish from there, the guy in second NEVER got around the guy in first. So, I made sure to get that left lane, got a fast start, and I was in front. Going into the "downhill", I kept skiing much further than I normally would have, to be sure nobody with faster skis would come around me. Tasha was behind me coming up the hill into the corner, but, there was nothing she could do at that point, so I moved on.

At this point I was definitely not feeling very powerful in my movements, but they changed the format again, in response to a lot of griping, back to two-lap heats. These were the semi-finals coming up, so two people would advance. I didn't recognize any of the names in my heat, and figured I'd go with the usual strategy - get out fast and lead it from the front. It was a fast enough course, with no real uphills or difficult parts, that this wasn't a suicidal strategy, the one-lap heats were taking 30-35 seconds. I jumped hard from the gun, led into the downhill, and a UNH girl on faster skis got around me. I was content to follow her, in fact, once I noticed that the other two girls were way back, I let her build a substantial lead, because why waste myself, right? The gradual uphill was feeling pretty tough, at this point, and even after eating food I did not feel strong or fast. Nor did I feel like racing, but it seemed like more fun than just tootling around on the trails at mach 1. (sugar snow is fast stuff).

The final was myself, the UNH girl who I don't know from the last heat, Marlijne Cook (UNH), and Kirsten Gill (Bates). It was two laps, again, but positioning still mattered. I ended up drawing the far right lane, and although my start was fast, I didn't move left soon enough, and Kirsten and Marlijne busted through that hole I'd left open. I tried to cut in behind Marlijne, but the other UNH girl was holding strong and wouldn't let me in. I slotted into fourth, down the hill, and coming around the first lap, the UNH girl was getting dropped, and there was nothing I could do to get around her. I sort of resigned myself to fourth, but then she slipped a little on an icy patch, and had to throw in some V1 strides, so I gathered enough momentum to draw even with her on the downhill (the only possible place to pass), and use my momentum to come into the uphill corner to the finish in front. Phew, third place was mine, but it was frustrating to have played the start wrong, because those first ten seconds mattered entirely too much.

But it was just as well that I placed third, because first place got Atomic skis, which I couldn't have used anyway, second place got a swix ski suit, which I didn't need, and third got a polypro shirt, which I do need! Its a large, but maybe I'll grow into it? 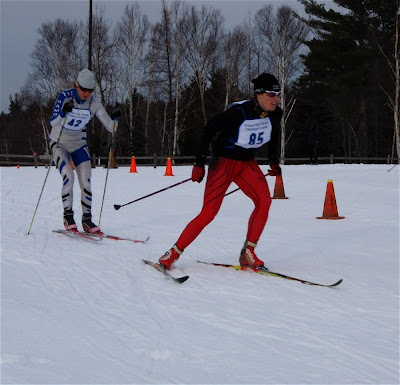 Finishing the quarter final just ahead of Tasha Kullas. Photos from Great Glen, thanks! 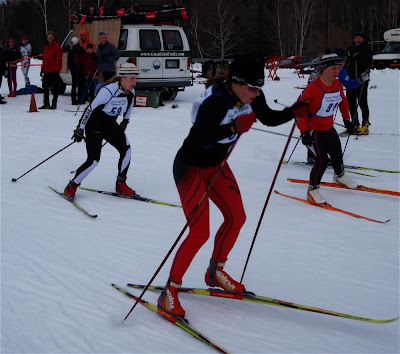 Starting the semi final, the UNH girl who ended up leading it is on the far left (the best lane to start from)

Sunday Erin and I drove over to Waterville Valley, after spending the night at Kathleen's parents' house, and the snow was much less sugary. It was a chola-binder-covered-with-special-purple sort of day, and there was plenty of terrain there to satisfy my OD needs. About 10 CSUers showed up, and I actually felt quite useful as they re-learned how to classic ski using wax instead of ratchets... If you're going to Waterville, know that the skiing was good and I used race skis with no problem, but only Tripoli and Livermore roads are open.
Posted by Alex at 10:10 AM