This race went much better. I was there for the start, which helped things along tremendously. I will post pictures and maps when I get a chance to do so, this internet station is not ideal. The course was two loops, and you picked up a new map after the first loop. I navigated very cleanly for the first part, and skied hard, I felt like I might actually be racing instead of just skiing around with a map wondering vaguely where I am. The second loop I think I lost some time, I was getting quite tired and so it took more looking at the map to get to where I was going than I would have liked, but luckily most of the big climbs were on wide trails, which made it enjoyable to hammer out a steady V1 rather than hop and skip and struggle on the narrow trails uphill. I ended up skiing a lot with a swedish girl, who I suspect is much faster than I am, but when I had memorized a section of the map and was just racing, our speeds were similar, I was probably the faster skier but a real klutz in the woods. Anyway, I ended up 17th of 20, which doesn't sound great, but actually was a very good result in a field of Scandinavian ski orienteers. I am happy with that result and that race, hopefully I will only improve in the middle distance tomorrow. 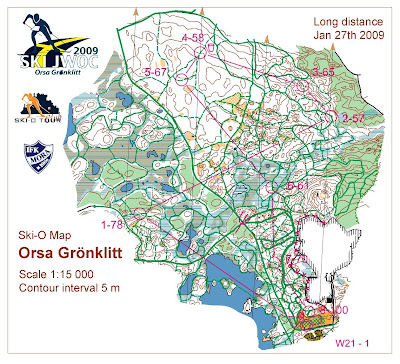 This is the first map of the long course. After completing the course, you ski through the stadium and pick up the second map. 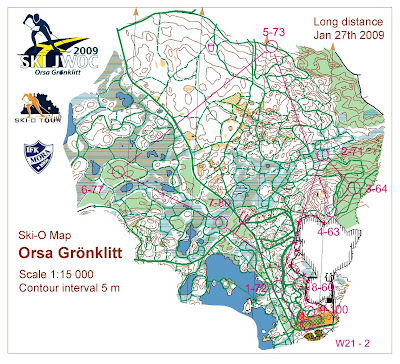 This is the second map. The total distance was 14km, straight-line distance, while the shortest skiable route was something like 16-17km.

The fields are actually pretty small for the open, or W21 class. There are 250 registered racers, but most of them are raing in the junior ski orienteering world championships, so they are on different courses than me going different distances.

Today is a rest day, and tommorrow is the middle distance race. Saturday is the relay, where I will at least do the first leg, and then Sunday I start the long trek home.
Posted by Alex at 6:07 AM