I arrived in Sweden around 2am on Saturday morning, thanks to plane delays, and stayed with my friend of a friend of a friend, who turned out to be quite nice and now I'll rank him as a friend. Saturday morning, Neil (the new friend), Boris, Kat and I drove north and went skiing along the way at Falun. You know, world cup trails. That Falun. All the trails weren't groomed, but the ones I was on were still darn nice! We made it up to Orsa, and the next day went skiing at Mora, where the Vassaloppet finishes. This is apparently THE RACE to do 'round these parts, so someday I think I'll come back. After our ski, we headed up to Gronklitt, the ski area where the Nordic Open Champs and the Junior Ski-o champs will be held, and met up with Carl Fey and his wife Natasha and their 3-month-old baby, Erik, the family I'd be staying with this week. I know Carl from past ski-o races, as he is an American who has chosen to live in Sweden, so it is a nice setup.

Monday was the model event, where the competitors get to train on a map similar to the ones we'd be competing on. Not much to say about that. Today was the sprint, and I would say it went horribly. I was standing near the start area, taking off my warmups, and I looked at the clock, to see how long I had. I knew that I went at 11:08, and I thought that the clock said 10:52. It actually said 11:02. So I warmed up for another 7-8 minutes, and then went to the start only to see that I missed it. Oops. I took off, completely frazzled, and made it through the first two controls, but then totally blew the third one, losing contact with the map and wasting precious seconds to retraece my steps to somewhere that I recognized. Another oops. The next couple were ok, but going to number six, I stopped trusting myself and thought that I had gone too far, when actually I had not gone far enough, and I wasted a lot of time (4-5 minutes) skiing in circles before I realized what I had done. Another oops. Anyway, I finally made it to the finish, something like 15 minutes out of the lead in a 15 minute race. Bad race. I am cringing still just writing about it. 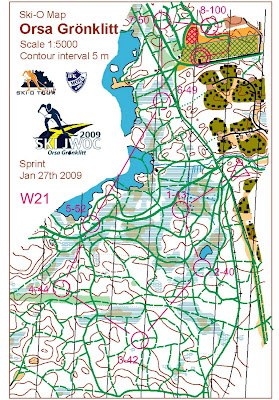 This is the map, the start is at the triangle and the finish is the double circle.
Posted by Alex at 10:59 AM