This last weekend was a ton of fun. Not only was it the biggest cx race of the year on the east coast, but the courses were great! I never thought I would ever say that about Gloucester, the famed grass crit, and maybe its just because of all the mud, but I was smiling way too much, given the amount of mud in my teeth after the race. Saturday 2 inches of rain were forecast, and that may have been correct - it poured all morning, which made staying warm interesting. I did a good warmup, but by the time we went I was pretty chilly, and didn't want to sprint as hard as I should have off the line. Luckily, everyone slows down going into the hole shot, and I was far enough up that I could just keep pedaling and pass pretty much everyone. I think by the second corner I was in 2nd. This was nice. It was actually feeling kind of slow and relaxed through those corners, which was kind of pleasant.

Karin Holmes was ahead of me, and I know I can't ride with her - the last head to head match we had was at Quad cycles, where she rode with Anna Milkowski, which is something I don't think I'll ever do. In retrospect, I should have tried harder, but my head told me to just ride my own race. Anyway, Karin just kept pulling away, and soon thereafter, Allyson Snooks from MRC caught up. She also pulled away, but not quite as quickly, so when Natalia Gardiol caught up, I hung with her for a while. Another girl who I didn't know came up later on, and passed Allyson I think. I just couldn't hang with her, but I'm wondering how much of this was in my head - I was really sucking on the uphill pavement bit, and I think I should just taken some of my own advice and pedaled harder. Anyway, on the run-up I managed to lose Natalia, although some time after that (on that pavement section) Clara Kelly, the little powerhouse who hasn't quite figured out bike handling yet, came zooming by. Just like in the Quad cycles race I couldn't hold her wheel, and she was gone.

Anyway, I held off Natalia to the end, for fifth place, and thoroughly enjoyed the mud and the muck and the rain. More races like that, please! 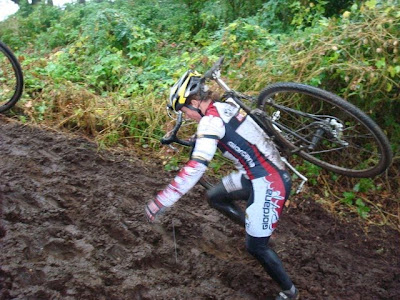 After changing into dry clothes, which seemed to take forever, since I was hiding in my car shivering so badly my teeth were actually chattering, we ventured towards the food, because Ed wanted to buy me sausage and beer and who am I to refuse an offer like that? Anyway, I had just taken the tape off my ankle, and two steps out of the car I stepped on a rock and rolled it again. I tried not to cry, but that hurt, bad. So Ed taped up my ankle again, and then the sausage and beer made it feel better. And soon it felt good enough to sprint around screaming at people to pedal harder for the rest of the afternoon. Perfect recovery for sunday!
Posted by Alex at 9:39 AM