I did this race in 2007, when I was really pushing the limits of being overtrained, and I ended up dropping out. I just remember being so, so, tired. I could barely make it up the run-up, not to mention think about pedal my bike. That's not a good sort of tired. Anyway, this year, I'm not overtrained, and I've been having a lot of fun riding my bike, and this race was no exception. 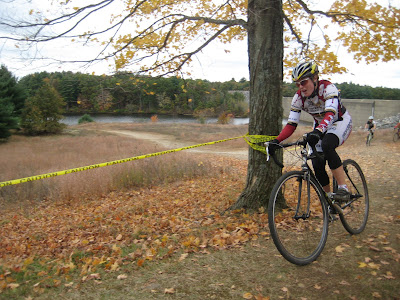 I started in the second row, I hadn't done a super thorough warmup so I figured I didn't need to blast out of there. The start was stupid sketchy, people changing lanes, veering all over, rubbing elbows, so I slowed down. Through the first little uphill barrier, around the field, onto the off-cambre and I screwed that up, had to awkwardly dismount, and pretty much took out 3/4 of the women's field. Eight got away, and a bunch more passed me as I was trying to figure out how to get my bike down from that hillside. Whoops. My initial reaction was to feel pretty guilty about causing people to have to dismount, and then I realized, its a cross race, its the first lap, its something mildly tricky in traffic - you can't get too mad at someone bobbling it. The guilt dissipated.

I set to chasing, and moved up to 7th by the end of the lap, caught 6th just before the technical part of the course (which was SO MUCH FUN), caught up to 5th by the run-up, passed her on the power section, and set my sights on 3rd and 4th. I caught Michelle going into the third lap, and caught up to Natalia after the run-up by the guy in the chicken suit. I was leading into the field back onto the off-cambre, and I carried too much speed and got bounced off balance and fumbled again, another awkward dismount and I was really annoyed about that, and Natalia and Michelle rode past me. I knew I could catch them, I had legs of gold that day, and I'd already discovered that I was significantly faster on the fun part of the course. I knew at that point I wasn't catching 1st and 2nd, there wasn't THAT much room for error. While it would have been nice to use these legs of gold to contest first place, racing is racing and bobbling is part of it, best to just learn to ride a bike.

We had two laps to go, I got past Michelle by dive-bombing a corner, and caught up to Natalia just after the sand, where I was making up ~10s on her each lap. I'm good at sand. Instead of instantly attacking, I sat on her wheel to recover up the run-up and through the woods back to the power section. When she didn't speed up there, I knew I had her, so went around and tried to sort of attack - difficult when you're already going close to full-out. I wish I'd had a HRM on, I was basically wheezing the whole way. 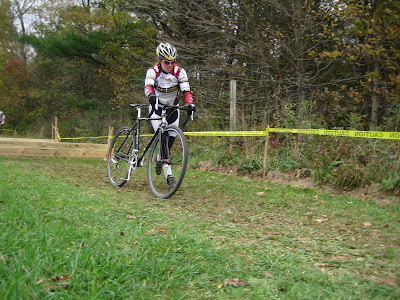 I was in 3rd going into the last lap and knew I just had to ride cleanly to cement this place, and I heard Natalia go down going over the telephone pole thing, now it was just Michelle I was holding off, so I railed the corners and the sand and got myself a pretty nice little gap, held on to 3rd but was >1min down on 2nd, who was <30s down on first. The prize money paid the entry and some gas, and the race had free food and a man in a chicken suit. I'll be back next year for sure. 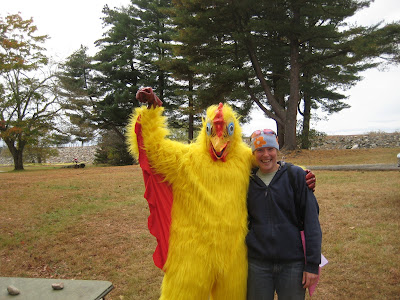