If you want to be good, you have to practice... I've been doing more orienteering recently, despite the ankle setback. Hopefully it'll actually strengthen my ankle to run more, we'll see how that hypothesis plays out. Anyway, I'm operating under the "if it doesn't hurt just keep going" scenario, and so far so good.

Last Friday was a US orienteering team fundraiser sprint, in Peterborough NH at Shieling Forest. Both Ed and I went up, Ed to work results of the e-punching and me to just sort of help out where needed. I decided that with enough tape, anything is possible, and went out to run the course. Although my speed wasn't great, since I was being pretty hesitant, I ended up second. My plan was to run a perfectly clean race, and I failed completely at that, but it was clean for the second two thirds of it. 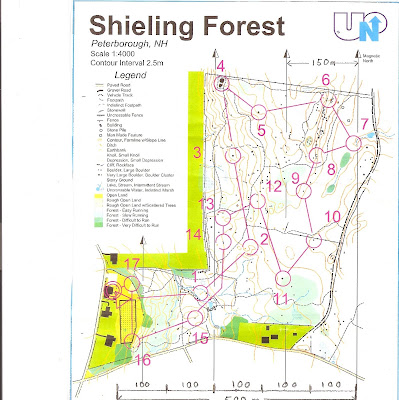 I've been having issues recently getting off to a fast start in sprints, the first control (and all the stuff getting there) is just coming at me too fast. This was no exception, and I felt overwhelmed the whole way there. But then I decided that I was good to try to run a little faster, and totally overshot two, ending up in the wrong reentrant since I had gotten off my compass line. This cost me over a minute, and so I tried to make up time to 3, which was a mistake since I ended up overrunning it and costing myself another 15 seconds. I didn't learn from my mistake, and overran 4 as well. This was getting frustrating. I yelled "Focus!" and that seemed to do the trick, because I was clean to 5. At this point I could hear a guy catching up to me, and I went into stealth ninja mode. Can't let someone catch up!

Unfortunately, he caught me as I was leaving 6, he probably heard the beep as I punched the control, and he passed me on the way to 7. I then tried to catch back up and pass him between 8 and 11, somehow navigating well while focusing on my competitor but just unable to run fast enough to get him. 12 I was a little too far to my left, and attacked from the trail, which worked well, and then I saw him leaving 13 as I got there. I was sort of slow going to 15, unfortunately, and that was the last I saw of this guy, but I was pleased that I ran as well as I did while trying to pass him back. I think other people in the woods tend to help me focus better.

Since my ankle held up so well in the woods, I figured I'd try running on the streets. CSU was holding a street-o (actually I was hosting it for CSU, we rotate who sets the course each week), and I'd designed some intervals. Unfortunately, you can't really do control-picking on a street-o, and the full course was 10 miles, which was a wee bit too long for a Tuesday night. Luckily, you could choose to do some of the intervals. I ran controls 4-9 and 12-16 as intervals, each one was about 1.5 miles, which was far more running than my legs wanted to handle. They sure don't do speed too well right now, because I am SORE today. At least my legs went fast, they are just paying for it two days later. The map was basically impossible to read, but because its a street-o, you have plenty of time to figure out where you're going as you run. I guess I have an advantage since I know these streets really well, but I ran perfectly clean! 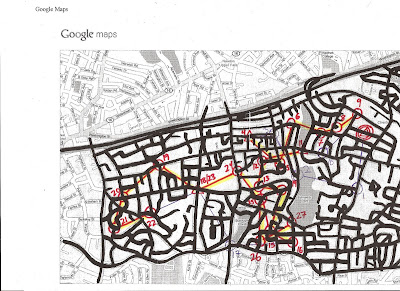 And then we gathered at my house for some delicious chili and Ross's apple crisp. The only point of running is the eating afterwards, right?
Posted by Alex at 10:14 PM