Saturday was one of those days when I got home around 6pm and instantly fell asleep for an hour. It was also one of those days when I actually came to the conclusion that something was stupid as I was doing it. This is a rare occurrence in Alex-land. What I wanted to do Saturday was run at a local orienteering meet, but IBC co-sponsors the Canton Cup, so I had to go down there to help out. I had agreed to take pictures of the kids race and then help take down the course, since my race was at the end of the day, but since the kids' race wasn't until 2pm, I had all morning to orienteer! I bet most people would have been smart enough to choose one or the other, but I'm not most people, I think three races in a weekend is a good idea. 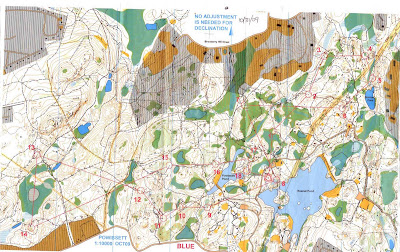 The black line drawn in pen (if you can differentiate it from trails) is my route.

Anyway, one of my goals for orienteering is to get faster at the super easy courses - the ones that the little kids run. Mostly this is so that I can get used to making snap decisions while on the fly, and hopefully I'll then carry this speed to the advanced courses. So the first order of business was to run a yellow course (the second-easiest). I went out and did a fairly thorough warmup - if I'm going to run hard, I'm treating it like an interval - laced up the ankle brace and headed to the line. The course was very easy navigationally - all the routes were on trails, with the controls just off the trails in the woods.

I quickly discovered that while it is faster to run on trails, rocky New England trails have much worse footing than squishy open woods, especially when you're going all out. I was spending a large portion of my energy watching my footing, and this meant that each time I did look at the map it had to be more "quality". But I could really hammer on the trails, and I made it through most of the course with no mistakes, until my penultimate control - the lactic acid must have finally been overwhelming me, because I made a stupid mistake and wasted four minutes (in a 20-min race, this is HUGE) wandering around a hilltop. After four minutes of that, I was recovered enough to realize what I'd done and fly through the rest of the course, but it is still somewhat embarrassing to make a big mistake on such an easy course.

Anyway, intensity for the morning over, I exchanged my yellow course map for the blue (the longest advanced course). I had noticed that my right knee was feeling a little weird as I finished the yellow, but I chalked that up to running hard, which I haven't done in a long time. I figured I was running the blue at an overdistance pace, so my knee wouldn't hurt. The first couple controls on blue were just beautiful - I should probably do more warmups that are hard and with a map, I felt totally in contact with the map and my surroundings. The woods at Hale Reservation are kind of shitty - lots of high bushes and blueberries in an otherwise open forest - it makes it hard to carry much speed through them, if you value your skin. Even with spandex or nylon pants, I leave these races in the woods southwest of Boston covered in red welts. Its too bad that the mapping does not reflect the actual density of the woods, because it really slows me down to push through the thick stuff.

In my vast intelligence, I hadn't eaten anything after the yellow course, so I started making mistakes after about an hour. That funny twinging feeling in my knee had morphed into a dull pain by control 11, and by 14 I was limping pretty badly. It didn't help that there were some long trail legs, when I had nothing to think about other than my knee hurting. I made a bunch of mistakes, but cleaned up my act by the end, and finished in about 2:15. Between the warmup, the yellow course, and the blue, I was at close to 3 hours of running. Whee! Time for a bike race!

Anyway, the knee thing seems to have cleared up by now, it was stiff Sunday but fine this morning, I'm hoping it was just related to my biomechanics when I am wearing the ankle brace. We'll see if it comes back...
Posted by Alex at 2:22 PM