I did this race last year for the first time, it was mostly a trail run, but there was definitely some navigation involved, and I decided to give it a go this year as well - actually it had been on my calendar for a long time, as I felt I'd have a chance at actually doing well. Unlike most orienteering, this race lets you follow, and much of the running is on trails, so I don't lose out as much as I would to more experienced orienteers on a "real" course. The Blue Hills East map is much older than the West one, and really, it just sucks to orienteer on. Things aren't quite as accurate as I'd like, and the fact that none of the blue features (ponds, marshes, etc) were visible threw me for a loop a couple times.

The first leg was ~2km long, and I quickly decided that the road looked like the safer choice. Unfortunately, I was following Boris, who took a huge group of us (being favored for the win, people figured he'd be a good person to follow) almost 180 degrees away from #1, and although we got to the road eventually, we probably could have saved a few minutes by getting there more directly... I was hoping, once we hit the road, to really hit the afterburners and take off, but quite the opposite happened. My intense week the week before had caught up to me, apparently, and I was working REALLY HARD to keep that 8-min mile I was holding. I watched Marie, a fast Swedish chick studying in the US, run away from me, and there was nothing I could do about it. This was disappointing, but I figured, why let up, maybe fast people will make mistakes.

I caught up to Tim Parsons, one of the faster "old but accurate" guys, and we started narrowing the gap on his 15yo kid who was up ahead of us. Ben (Tim's son) didn't look like he was pushing all that hard, and I remembered finishing close to him last year. Leaving #1, I found myself in a pretty prestigious group - JJ Cote, Greg Balter, Tim Parsons, and Ben Parsons. This meant that we were moving pretty cleanly towards #2, although Balter was running away from us. We hit the last trail crossing, and slowed down as we entered the woods. Here was where I managed to make a 9-minute mistake - I thought we'd gone too far, because I hadn't realized that the scale of the map was a 1:15,000 instead of the 1:10,000s that I'm used to. I spent a long time circling that area, reattacking the control twice, and finally getting there around the same time as Vanessa Wood, a local runner whose boyfriend does a lot of orienteering but she doesn't do as much. At this point, I was kind of pissed, when you spend nine minutes wandering in circles, it feels like thirty minutes, and my prestigious group was gone. I should have just trusted them!

#3-4 were fast and accurate, but Vanessa wouldn't be shaken. I breathed a huge sigh of relief as we crossed the road and onto the newer map, although looking at my garmin tracks versus the red line which is how I drew my route, I don't know how accurate the Blue Hills West map is, either. What the heck was going on between 5 and 6? I was running on the trail. What was my garmin doing? The garmin route to 3 also looks a lot more wiggly than I remember running... 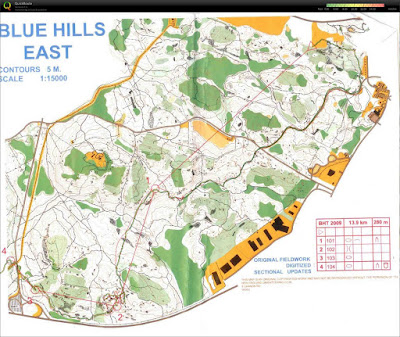 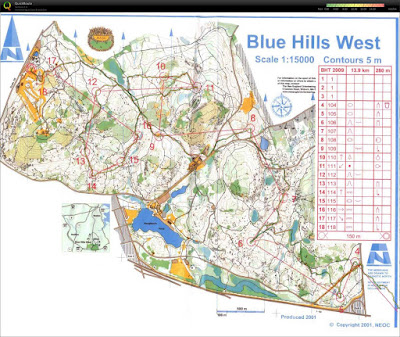 Vanessa and I continued to run together, although we were certainly not working together - it was a series of attacks, she would attack on the trails and I'd try to make up some ground in the woods. I know following is allowed in this race, but by #8 I was starting to get really annoyed that she was able to use my accurate navigating to spike each control - something she probably wouldn't have been able to do on her own. She finally dropped me running up the hill to 9, I just couldn't make my legs work anymore, and had to walk it. I thought I'd do something clever to 10, and it was actually a good plan, but I managed to fluff it up and go down the wrong trail, and then I let the vegetation push me too far to my left on the way to 11 - at this point I was sure Vanessa was GONE. But leaving 11, she was coming in to it, clearly my observations had been correct, left to her own devices she didn't do so well. Unfortunately it was a lot of uphills and trail running to 12, and she caught up.

Finally by 13 we had some actual orienteering, there was navigating to be done and while I wouldn't call the woods technical, being the better technical orienteer meant I could put some time on her, a couple seconds here, a couple there. Unfortunately, there was a long freakn trail run to 17, and she closed the gap really quickly. I don't think I've ever been in a situation before where I couldn't just run away from people. Yuck. I was ready to cede the race at this point - she was opening a gap, I was tired, my knee hurt, and I just wanted it to be over. Luckily for me, Vanessa misread her clue sheet and didn't see the control at the top of the cliff for 17, and I caught up to her while she was standing there and scrambled to the top ahead of her. I was worried she'd catch me as I was hiking up the ski slope - definitely couldn't run it - but I got to 18 just ahead of her, and then gallumphed down the slope to the finish with complete disregard for my ankles, while she slowed down a bit because shes not quite so dumb as me.

So that puts me as fifth girl, 25th overall. Not a great run, but I was pleased with my orienteering, and it was fun to battle with Vanessa the whole time. But boy does 10 miles of running not feel good when you're not used to it.
Posted by Alex at 9:34 AM