Friday was my first 3000m of the year - usually I try to do one in the spring, too, but I just never got around to it this year. One of my junior skiers also wanted to run a 3k, having missed the last one with the team, so we joined forces to battle the track in the dark. It was warm, but really windy - a headwind right down the home stretch, and Hannah, being ~6" taller than me, was definitely benefiting from the tailwind more in the backstretch. We did a solid warmup, and lined up. I was hoping to use a similar pattern in my splits as last year - starting fast, getting a little slower, and then finishing a little faster. Hopefully I'd be faster, but I wasn't holding my breath for that, given the ankle sprain and other various issues through the summer, any running I've been doing has either been slow (warmups) or in the woods, which also tends to be slow.

We started out, and I drafted Hannah going through the first 200m - that one was fast, 42 seconds. I thought i might have a chance of having a good 3k, but when I hit that back stretch with the tailwind, I knew it wasn't to be - I just couldn't pick up the pace for that part, despite having the tailwind. I knew I'd need to be moving there, because the wind in the homestretch was strong enough that it was adding ~2 seconds to each 200, which is significant - and I was only losing 1 second on the back stretch. So each lap was 1-2 seconds slower than I wanted it to be. The pacing structure was right, I just couldn't move fast enough. I ended up 10 seconds too slow, 12:10, but I was satisfied. The wind might not have been worth 10s, but it was certainly worth some seconds, so that was good enough. Hannah didn't break her record, either, finishing just two seconds shy of it - 11:59, a darn good effort, given the wind!

Saturday, it was pouring rain, and the November blues had hit hard - my desire to rollerski in the rain was quite low, to put it mildly. I had read about the Ski Erg competition on fasterskier, and some of the CSU masters had sent a link to it, so I figured, hey, the Community Rowing Center is close, I'll go do that. I don't think I set any new records, in fact some more of my juniors showed up and trounced me, but I did get a long-ish "warmup" on the thing, as an alternative to rollerskiing, staring out the window watching the rowers fight the torrential rain.

It looked pretty gross out there, so I went orienteering soon thereafter. Running in the woods in the rain just makes me feel hardcore, I guess. 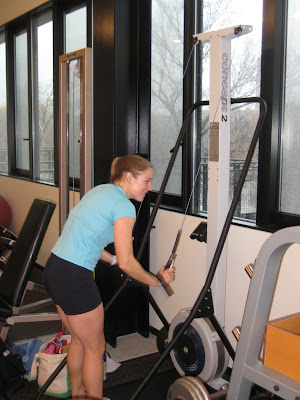 We did some experimenting, to see what technique was fastest. It turns out, double poling on that machine isn't quite like a real double pole (it really is upper-body-only) and its not very fast, the fastest technique is to just hang on to the cords and jump up and down as fast as you can. I wish I'd gotten a photo of Jim doing that during his test... 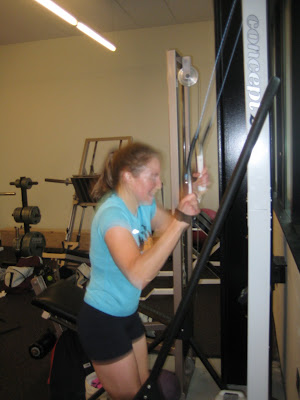 Jumping up and down.

I can see the ski erg being good for strength, but not really as a substitute for testing on skis or for just going skiing. Technique is just too big a piece of the skiing pie to leave it out like that. 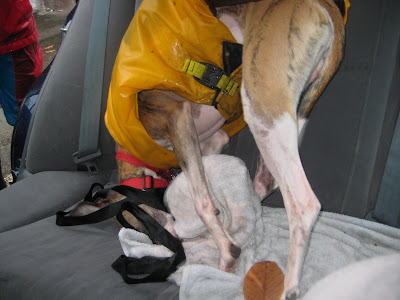 Presto, Lori's dog, was really excited when he realized we were going orienteering. And then he got out of the car and realized it was raining, and the look on his face was clearly saying "I did NOT sign up for this. Why is the weather ruining my run?" Upon getting back to the car, it was pretty funny watching him attempt to get dry RIGHT NOW. He wears a rain jacket because if you had 0% body fat, you'd get cold too.
Posted by Alex at 9:37 AM