After my rather busy Saturday, I was utterly exhausted by the time I got home - completely depleted. Ed was at work assembling his rollerskis, so I didn't even have anyone to complain to. I went for my tried and true and believed-in recovery technique - contrast shower followed by standing on my head followed by a nap - ate some dinner and fell asleep by 8. Apparently Ed had a whole conversation with me when he got home and I don't remember a thing about it. Anyway, Sunday morning dawned, and we packed up the rollerskimobile and headed north to CSU's rollerski race in Andover MA. My knee was a little stiff from whatever was going on yesterday during the orienteering, but I figured that the course is pretty flat, so I wouldn't be bending it much. It ended up being fine, so its good I raced. 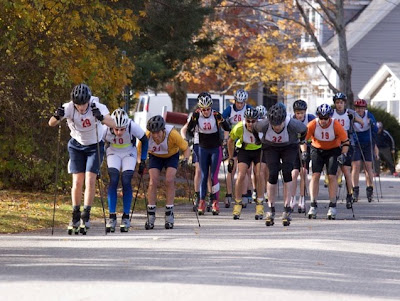 The start, from Chris City.

Last year, I ended up losing a sprint to Audrey Mangan, a Harvard skier on faster rollerskis. I didn't want that to happen this year, so I started fast, with the first group of masters. It broke up a little up the first hill, but I worked hard to keep up - there is a lot of flat on this course, so its worth it to go under a little on the hills - plenty of recovery. We also had a nice tailwind for that long flat section after the hill, and really were flying. I crested the hill with John Rich, just behind Dave from Ford Sayre, and then Jamie came by, pulling us up to Rob Bradlee and Bob Burnham. This was good, these guys would help me separate myself from Audrey or any other fast Harvard girls, so I worked hard to close the gap. Then Jamie slowed down, so I went around, and strung it out a bit.

Poor Bob got stuck drafting me - I don't provide much draft to those guys - but I just kept hammering away, because I wanted to test the hypothesis that I am a sick nasty double poler and I can HAMMER for 15k no problem. We turned the corner and headed uphill and Rob came around, I knew skiing in front of Rob Bradlee wouldn't last. Bob came around me next, and quickly closed the gap up to Rob. I just couldn't go that fast up the hills, plus this section of road had more wet leaves, so my skis would slip occasionally. Anyway, Rob and Bob had a 10s gap, more or less, going into the long gradual freshly-paved uphill on the back side of the course - I really liked this section, my poles dug so nicely and my skis rolled so smoothly, black powder is straight up heaven on rollerskis. I closed the gap, so got to draft, since we were going into the wind now. That provided a nice break, and I was feeling rested as we crested the hill and started into the final downhill of the lap. 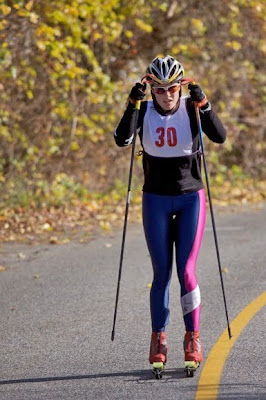 I put in a surge over the top, got in a low tuck, and opened a tiny gap to come through the start/finish area. Thats right, I beat Rob for 7.5km! Of course, we started up the big hill again and Rob dropped me like a rock, Bob caught up and I couldn't quite match his stride either. I wonder if tall people have more of an advantage up hills on rollerskis than snow? Or maybe I was just tired... We were strung out going into the back of the course, I couldn't close the gap on Bob and he couldn't close the gap on Rob, but he closed the gap by the end of that flat part and I was still dangling off the back. Luckily, we were alone on the road, no sign of Jamie's group or any Harvard girls.

I didn't close any gaps up the hill or even on the black pavement, although I like to think I moved up a little bit there - stronger kick double pole than Bob's, but my upper body was starting to get pretty tired by then. Still moving fast, but it was taking more effort now. I couldn't close the gap, and finished about 30s behind Rob and Bob - Bob took the sprint. It was a good race, though, 43:50, which was close to four minutes (FOUR MINUTES!) faster than last year. If I can do this tired, what can I do when rested? Hopefully its not just because of the nicely paved back section of the course, that definitely sped up times this year.

Just don't put yourself so far into the fatigue cave that you can't come out of it no matter how hard you try to rest! Less fit and fresh is always faster than more fit and flat...to quote Myerson.

Can Ed hook me up with a free pair of rollerskis to demo this fall? I'll even return them Jan. 1st.

Ed says he'll give you a wicked good deal...

I agree with fresh and less fit, but I'm not digging yet, just scratching the surface! I don't have to be fast until January, technically...

Alex, I can't wait for snow either. And I DON'T HAVE TO ahahahahaha its snowing here and has been all day woohoooooooooo yah i went skiing in the dark around campus it was fantastic.