It was a shorter trip, thanks to the jetstream, to come back. We didn't cross the north pole this time. I tried to work my magic trick by not sleeping at all on the plane to make me tired when it was time to sleep, but this has just left me exhausted and cranky.

Ski WOC was kind of a disappointment - I consistently picked the wrong skis (I know, my fault), with disastrous consequences, and my body did not seem to want to kick into race mode. Probably related to not having enough time to adapt to swapping my sleep schedule by half a day, but I thought I was more resilient than that. Anyway, it was frustrating to be unable to ski fast, especially on those courses. I'll put the maps up soon, I just need to scan them first. The courses relied on being a fast skier, since the navigation was so straight-forward, and I just didn't have what it took to contend at the level I wanted to. This is probably also a result of having traveled all over the world all winter - it has been a long season. One more weekend race in California, and then I get some well-deserved (I like to think so, anyway) rest.

It has also occurred to me that I have to change the purpose of this blog, now that the Japan world champs are over. Maybe it will just be me rambling on about life, sort of the same way it is now. Maybe I'll come up with some other crazy result-oriented goal, and put it out on the internets for the world to see. Anyway, I came away from Japan with a head full of ideas for improving the US ski orienteering scene, so hopefully I'll start implementing that once I have some energy again. In the meantime... some shots stolen from other people. 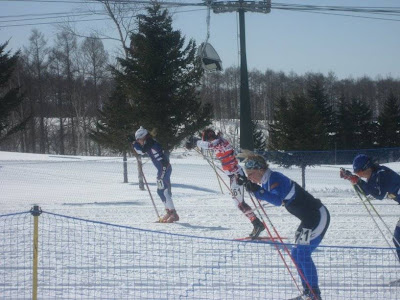 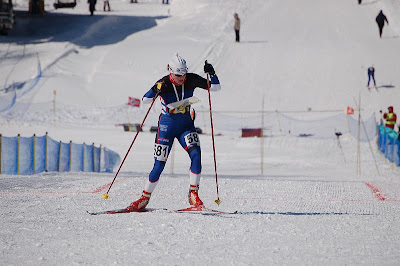 Here I am slogging in to the finish, at the end of the relay on disastrously slow skis. (photo credit orienteering.com - Japanese organizer)
Posted by Alex at 2:36 PM