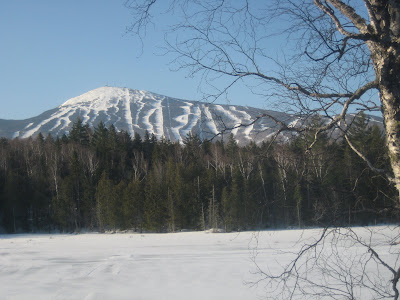 It was a beautiful day on the 'loaf, which was good, because if the sun hadn't been out, I probably would have skidded into a tree at 40mph and broken every bone in my body. Instead, it was beautiful, soft, slush, and the alpine part of the downhill was fun instead of terrifying. The inferno is an amazing race, probably my favorite one of the whole winter, because not only do you get the fun (or terrifying) downhill from midway up the alpine mountain, then you get a significant downhill on the xc trails, which is my favorite part of any ski race. The xc trails were actually more hair-raising than the alpine trails, because I knew they were designed for people without edges and so I refused to let myself slide any corners or not tuck, and some of those corners are not designed to be stepped, I think...

I let Ed start behind me this year, instead of starting behind him like last time I did this. I knew if I could hold him off through the truly-gravity-assisted part, I'd be good to go. What really worried me was Colin starting a minute behind me, because he's crazy. And I wanted to beat him. Linnea started far enough behind all of us that I didn't think she'd have the advantage of seeing me and hunting me down, so I was less worried. While my competition warmed up, I stood and basked in the sun. It was so sunny and warm on the mountain that it was easier to stand there and watch people go off than to ski. I tightened up my boots, because I wanted to have the best possible edging ability on the downhills, but this turned out to be a stupid idea, because I tightened them too much and my feet fell asleep. Finally, it was time to go skiing, and I had to wake up out of my relaxed, sun-soaked state. Hey, I haven't seen much of this bright thing in the sky this winter, I miss it.

I have *temporarily* misplaced my garmin, but once I find it I will put up the route on Google Earth, it'll be pretty cool. The course started with two headwalls, of sorts, and then a kind of tricky right hander into a green trail, some more screaming downhills on slightly narrower trails, and then a sharp right-hander into the nordic trail system. I skated hard out of the start, because I had to look good for all the people watching, and then I figured I may as well tuck, because it didn't feel fast enough yet, and before I knew it a guy jumped out of the woods and frantically waved me towards a trail heading off to the right, rather than the straightaway I was aiming for. I threw on the brakes, made the corner, and quickly picked up speed again. A lot of speed. At one point, I almost didn't make a mild corner, as I skittered across some ice in the shade, but I held it together enough to look spectacularly terrified in front of the guy with the video camera on the corner into the outdoor center's trails as I barely made that corner.

At that point, you get a tiny bit of uphill, just enough to calm your nerves, before you start the rolling descent to the finish. I passed the guy on teleskis - those had looked like a great idea at the top, but he was side-stepping up the hills on the xc trails - and I found that my skis actually were rockets, it wasn't just the downhill. Then coming into the last corner before a gentle cruise in to the finish, I noticed a woman climbing up over the bank to get back on the trail, and I was momentarily distracted enough that I crossed my tips. Normally, I'd just uncross them, but with my boots this tight and my feet that numb, I went down in a heap and said something intelligent that sounded like "guh!" I got up quickly, and Colin hadn't caught me yet, but I could hear pole plants behind me as I skated hard down the gentle finish slope, and they sounded like they belonged to someone who knew what he was doing, not the guy on teleskis. I sprinted into the finish just barely holding off Colin, so I guess he still beat me but not to the line, and that is what counts. Ed came in a little later, but he didn't beat me :) 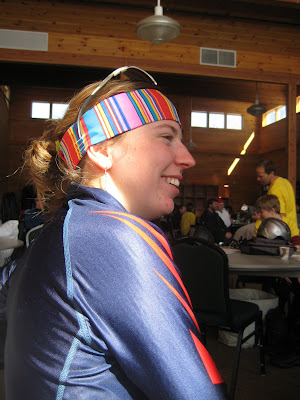 Linnea won the costume contest and I didn't take a picture, this is tragic. Imagine this girl with an orange ear-flap hat, and lime green shiny knickers, and you'll get the idea. Unfortunately, this didn't keep her on her feet, which was good for me, because it meant that I won the women's division. And a pie!
Posted by Alex at 9:53 AM

If you manage to find your garmin I'd love to compare GPS tracks. Given your fall and desire to not die on the top section, I'm guessing we were just about tied on the bottom section.

I would have come up...but Doghead was on Saturday.