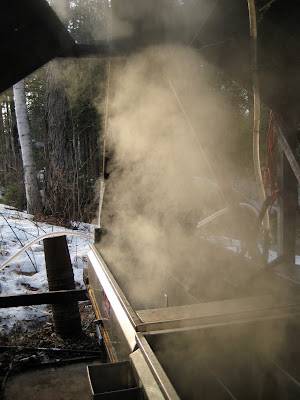 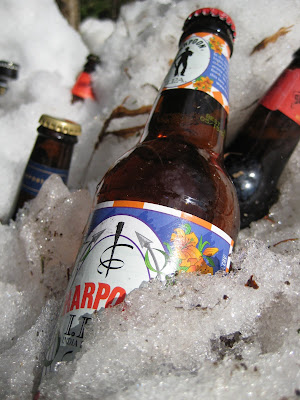 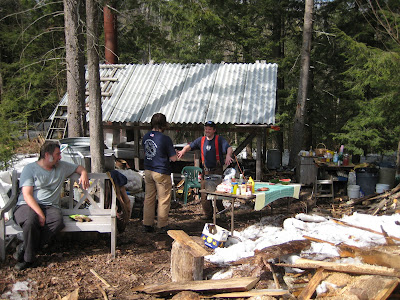 I swore off ski racing after the Gold Rush, and so Ed and I headed up to VT for the weekend to hang out with his cousin while watching water boil (Rob runs a maple syrup operation). It was pretty cool to hear Rob talk about how it all works, there is a fair bit of science involved, but what it comes down to is that you basically have to hang around and keep the sap boiling for hours on end. This involves a lot of beer. Among other things. 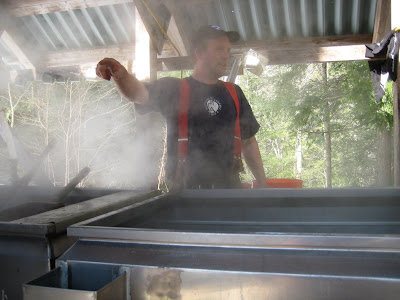 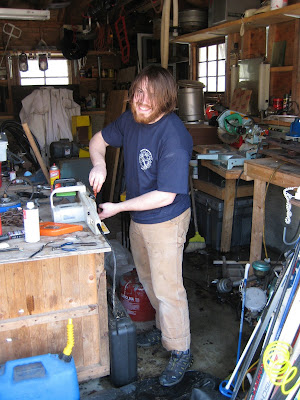 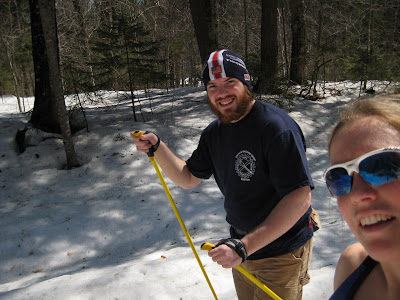 We went skiing on the Danby road, and basically, a dirt road groomed by snowmobiles had better grooming than we've seen at Weston all year. Perfect spring skiing weather, this is what I was hoping for when I went to California. Sunday I woke up to rain, but there was a race down at Prospect mountain, which is only like an hour away from Weston, so I figured, why not? It was supposed to be a pursuit race and then an obstacle race sprint, with prizes for costumes. We ended up not doing the sprints, though, since it was too miserable to stand around out there. The pursuit was a blast, however. We went classic, skate, classic, and the course (I didn't wear the garmin, it just wasn't that sort of race) went up the big hill you normally enter the stadium on, which is actually quite a long hill. Then it went down, past coach's corner, out on the flats, across the snowmobile trail, back on the flats, and back into the stadium. There were only a couple bare spots, but they were all on downhills, so easy to avoid.

We lined up, and it was pretty cold in the wind and the rain. Luckily, the bumblebee dress kept me pretty warm, its nice skiing in a dress, I might do it more often. My wings managed to not disintegrate also, so that was good. We started up the big hill, and I felt AWESOME. I wish I'd felt this good in any one classic race this year, I felt absolutely untouchable. Maybe its because we were racing on klister and I love klister skiing. Anyway, I followed some highschool boys up the hill, then dropped them on the downhill since I was on actually klister skis, which glide. Then it was very flat for a while and the fact that I haven't skied in seven days (Saturday doesn't count) caught up to me, double poling is HARD! Into the transition zone, and I see two guys leaving it. I put on my skate skis, and these skis have only one purpose in life. It is to go fast in slush. Even on travel wax, they were ROCKETS. Going up the hill was effortless, the skis did all the work. I caught one of the boys on the gradual uphill back to the transition zone, and I was worried he'd catch me back up the big hill. I was starting to feel a little tired, I mean, I haven't trained in a week and this was a big hill and we're going on 10 km, but I just kept slogging and the highschool boy didn't catch up, which I figured meant I was home free. I cruised around the rest of the lap for a resounding win, over the other two girls who were racing :). 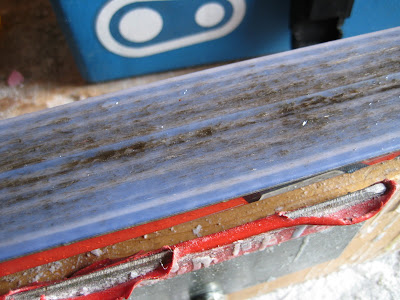 This is the glide zone of my ski. The snow was that dirty. 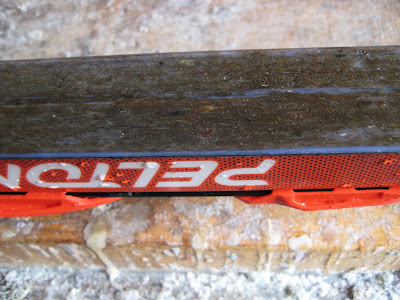 And this is the kick zone. Mmmmm. 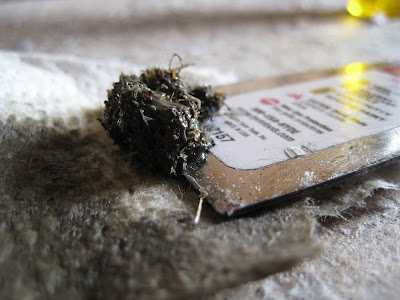 And of course, the klister (that started out silver) was this color when I scraped it off... 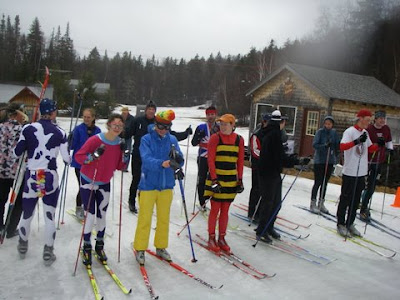 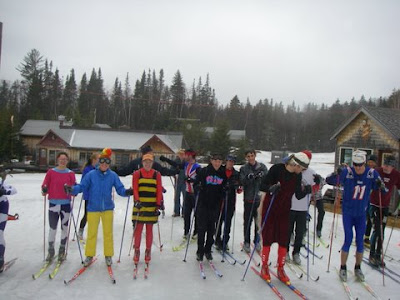 Since we skipped the sprint, we held the awards soon after the race, and I won cookies. What a great day. They should hold pursuits with multiple changes in real races, it makes it so much fun! I'm really glad I went to this race, since it ended the season on a high note, rather than the depressed angry note after the gold rush. 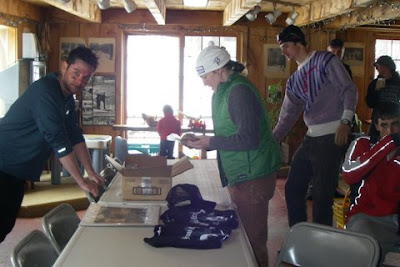